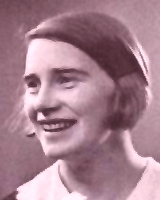 The multi-talented Grete Steffin, long known simply as one of many collaborators and lovers of the poet and dramatist Bert Brecht, was herself actually a gifted writer, translator and actress; her own accomplishments, however, were mostly obscured by those of her mentor/lover. Steffin’s immense contribution to Brecht’s writings have only begun to be adequately appreciated since the 1990’s. In addition to her authorial collaboration, this self-taught child of the working class made herself indispensable to Brecht in his European exile through her indefatigable services as secretary, critical editor, literary agent, general organizer and interpreter (she knew Russian, English, French, Danish and Swedish and had more than a basic knowledge of Norwegian and Finnish). Given the rise of Stalinism in Russia, Steffin had early on proposed the emigration of the Brechtian “extended family” to the United States and pursued this goal assiduously; she herself, having battled tuberculosis for years, was forced to remain behind in a Moscow hospital, where she died of the disease on June 4, 1941.

Margarete was the older of two daughters of Johanna and August Steffin; her father was a coachman and later a factory and construction worker with a strong proletarian class-consciousness. August Steffin was conscripted into the army during World War I, and mother Johanna had to earn money in an ammunition factory. Together with her younger sister Herta Margarete was put into the town’s childcare center, where she absorbed pietistic Protestant values and a severe conscience and sense of obligation. In contrast to August Steffin, and in spite of her heavy work-load, mother Johanna was a passionate reader and attended the theater regularly, especially when political plays were performed.

At school Margarete’s unusual intelligence was soon obvious; she won a prize for a story, and her hour-long verse-drama was performed in 3 different schools. When her teachers urged that she be sent to a college preparatory high school, her proudly proletarian father refused: she was not to become an intellectual, “alienated” from her class. Accordingly, Margarete left school at 14 and took a job as an errand girl for the Deutsche Telefonwerke (German Telephone Company). In 1924 she began an accounting apprenticeship at the Globus publishing company, thereby “joining the army of 1.2 million female employees in Germany…” (Hauck 12).

In decided opposition to her father Steffin continued her education through evening courses, lectures and almost obsessive reading. The proletarian cultural movement became her institution of higher learning; she joined the “Fichte” Workers’ Athletic Association, which had ties to the KPD (Communist Party of Germany), she learned Russian and became a member of the Fichte speaking chorus. Soon she was giving recitations in Sunday matinees. In 1931 she appeared in the Red Revues and took lessons in speech technique with Helene Weigel in the Marxist Workers’ School. In the première performance of Brecht’s Die Mutter (The Mother) on 17 January 1932 at the Berlin Theater am Schiffbauerdamm with Weigel in the title role, Steffin made an appearance as a servant girl.

Steffin had her first serious relationship at age 18, with Herbert Dymke, an office worker and member of the Fichte group. The two did not earn enough to marry, and the relationship was also troubled because of his involvement with other women. Steffin had to terminate two pregnancies; in her poetry and prose she later described the first agonizing procedure, performed by a “back-alley” abortionist and apothecary. She broke off with Dymke in the spring of 1931 and a few months later became better acquainted with Brecht through her involvement at the Theater am Schiffbauerdamm, where she had also begun to help out in the theater workshop as a secretary. Their working relationship soon turned into a passionate love affair.

Brecht was impressed with Steffin’s knowledge of literature, theater praxis and Marxist theory, and as a genuine child of the working class she could teach him a great deal that would be important for his plays and other writing. Moreover, she soon became indispensable in practical terms—she was effective and energetic in this realm. Steffin felt herself acknowledged and taken seriously by Brecht and even hoped initially for an exclusive, permanent relationship with him. (He gave her a ring and insisted that she wear it.) The two spent much time together in 1932-33, meeting and working together in many locations, including Berlin, Moscow, Ammersee, Tessin, Paris, the Côte d’Azur (Sanary-sur-Mer). For Steffin this was a time of deepest physical and emotional happiness: “Loving him, I began to love myself too.” (Steffin 202). Helene Weigel, at first resigned to the affair, considered divorcing Brecht in the spring of 1933. But the polyamorous Brecht decided after all in favor of Weigel and the children and followed them to Denmark at the end of June 1933—without, however, letting go of Steffin. To make matters worse, the Dane Ruth Berlau-Lund became Brecht’s favored mistress in 1935, and Steffin felt totally betrayed: “I love him so much that I’ll die of it.” (Häntzschel 206)

Steffin’s tuberculosis had been diagnosed early, and from 1931 on she had to endure many hospital stays and operations. Brecht and Hanns Eisler arranged a sanatorium visit for her in Crimea in the Soviet Union during May-June 1932; in the spring of ’33 she had a sanatorium bed in Tessin (Ticino, Switzerland). At least during these stays Brecht’s overburdened collaborator had an opportunity to write poetry, prose and articles of her own.

Grete Steffin’s poems and prose, chiefly autobiographically tinged portrayals of working-class life, or her sonnets to “bidi,” as she called Brecht, testify to her significant talent. She also wrote two plays for children. A linguistic genius, Steffin translated works by Russian, Norwegian, Swedish and Danish authors (e.g. the Dane Andersen-Nexø). While in exile in Finland she developed a theatrical piece together with Hella Wuolijoki which eventually became the Brechtian drama known as Puntila und sein Knecht Matti. Practically nothing of what she wrote appeared during her lifetime.

With works from the “Brecht factory” it is difficult to isolate Steffin’s contribution, since the writing was done as a collective and Brecht and his publishers, especially the later ones, often failed to mention her name. Nevertheless, concerning the Dreigroschenroman (Threepenny Novel) at least, it is clear from letters and other material that she played a decisive role, making significant corrections and stylistic changes. Brecht reports on the critics’ positive reviews: “In general you seem to have written a masterpiece, old Muck. Your clear, clean language comes in for special praise.“ (Häntzschel 217)

Moreover, the years with Steffin were Brecht’s most productive, and he lamented after her death: “for the first time in 10 years I’m not doing any decent work…” (Journal, 21 April 1942, cited by Hauck 26). In the nine and a half years of their collaboration the two completed 10 plays, among them Galilei, Der gute Mensch von Sezuan, Puntila and Der aufhaltsame Aufstieg des Arturo Ui. Brecht’s “little teacher” also worked on Mutter Courage and the poetry editions made during exile, for example the “Steffin’sche Sammlung” (1942; Steffin Collection), for which she made the initial selection.

“I would so love to be productive myself, but … whenever I begin something I worry that people will say I didn’t write it myself. And so I stop. Or I think it’s no good.” (Letter to Knut Rasmussen, 5 June 1940, cited by Hauck 36, N92).