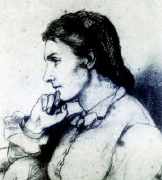 She was the seventh and youngest child born in eleven years of marriage, losing her father, the composer Robert Schumann, when she was five. Her mother, the famous pianist Clara Schumann, had to support the family and gave concerts all over Europe; the children were sent to boarding schools. Eugenie attended a strict boarding school for girls in Rödelheim near Frankfurt, where she was miserable. She fared much better at the boarding school of the progressive educator Henriette Schrader-Breymann in Wolfenbüttel (1866-9). From 1869 she studied piano at the Berlin Musikhochschule. There, in 1873, she became friends with the singer Marie Fillunger (Fillu), who was also studying in Berlin. The two became lovers and remained together for the rest of their lives, despite some painful separations.

When Clara moved with the family to Frankfurt in 1878, Fillu moved with her and lived in the Schumann household for eleven years, from where she made her concert tours. Eugenie and her sister Marie assisted Clara, who had a professorship in piano at the Frankfurt Conservatory. In 1889 a conflict arose between Clara and Fillu, probably instigated by Marie out of jealousy. Fillu moved to London, where she began a successful career as a concert singer. Eugenie remained in Frankfurt, cruelly unhappy. A severe psychosomatic illness broke out in 1892; Fillu rushed over to nurse her, and Eugenie, after recovery, decided to move over to her friend for good. She worked as a piano teacher in England, but did not give concerts because she suffered from excessive stage fright.

After the First World War, Eugenie moved to Interlaken, where her sister Marie lived. Her lover followed shortly thereafter. Inflation ate up Eugenie's savings, so she decided to become a writer to earn money. She wrote two books: one about her own life in her parents' home (Erinnerungen) and one about her father (Robert Schumann: Ein Lebensbild meines Vaters). Both works reveal a great talent and give a lively and witty insight into the life and work of the Schumann couple. It is regrettable that Eugenie did not cultivate her literary talent earlier.

Eugenie Schumann came into conflict with the Nazis. In 1937, a year before her death, the 86-year-old refused to accept an invitation from Goebbels to a performance of her father's violin concerto.

Eugenie Schumann is buried between her sister and her lover in Wilderswil near Interlaken.

The overwhelming importance of our parents assigned us our place from the beginning. When I came out of the pension, I found the world, so to speak, fixed and ready, and it did not occur to me to rebel against it. (Eugenie Schumann).