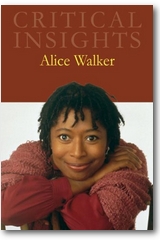 The author of short stories and novels, essays and poetry and activist for racial civil rights, women’s equality and peace among other causes, Alice Walker brought black women’s lives into primary focus as a rich and important subject for US American literature. Her landmark novel The Color Purple (1982), which drew upon her sharecropper family’s Southern roots, made Walker famous the world over and brought her the first Pulitzer Prize for fiction awarded to an African American woman, as well as the National Book Award. It shows how an abused young woman evolves through the help of other women and her own inner strength to throw off the shackles of male oppression to find love and affirmation within herself and in the arms of another woman.

Walker’s introduction of the concept of “womanism” (1983) was an influential corrective to the focus on white women understood by many under the term “feminism;” it helped broaden the women’s movement to include women of color and appreciate their traditional cultural and creative roles. “Womanism is to feminism as purple is to lilac.” (Walker, 1983). Walker has also been instrumental in rediscovering and promoting other Black women writers, past and present, most notably Zora Neale Hurston (1901-1960), whose work she edited and interpreted. 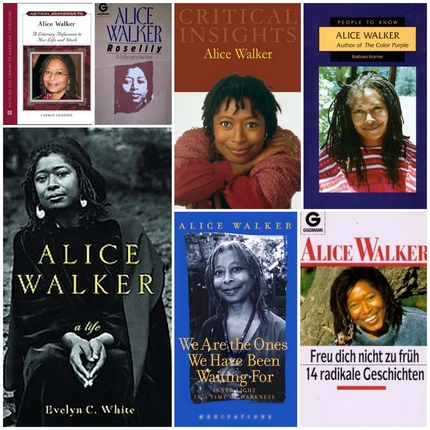 Alice was the last of eight children of Minnie Lou Grant Walker and Willie Lee Walker; precocious, outgoing and adored by all, she by all accounts enjoyed a happy early childhood. Despite poverty, discrimination in the face of Jim Crow laws and threats from the Ku Klux Klan, the Walkers saw to it that their chidren attended school. Her father worked as a sharecropper on a white-owned farm. Braving the Klan, he was the first black man in their county to vote. Her mother worked in the cotton fields and later as a maid. Walker remembers her as the source of her own strong sense of purpose:

I grew up believing there was nothing, literally nothing, my mother couldn’t do once she set her mind to it. So when the women’s movement happened, I was really delighted because I felt they were trying to go where my mother was and where I always assumed I would go. (White 22)

Her mother also imbued her with an appreciation of beauty; in the seminal 1974 essay “In Search of Our Mothers’ Gardens” Walker paid tribute to her mother’s aesthetic and practical gifts and opened a new perspective for honoring African American women’s long ignored accomplishments in such activities as gardening, quilt-making and story-telling. The stories Alice heard about earlier generations in her family left their mark and became the inspiration for her later fiction; in particular, she felt she had honored her Georgia “ancestors” and their struggles in the characters and events of The Color Purple.

When Alice was eight, she was accidentally injured while playing with two of her brothers; the shot from a BB gun left her blind in one eye and physically and emotionally scarred. Feeling no longer lovely or loveable, she retreated into a world of books and introspection which she later claimed enhanced her empathy with the suffering of others as well as her observational powers. For six years, she suffered the shame and guilt of feeling an outsider. At 14 she was given an operation which removed the cataract in her eye and restored her appearance and sense of self-esteem.

Alice graduated from high school in 1961 as class valedictorian and prom queen, and received a scholarship to attend Spelman College in Atlanta, one of the first historic black women’s colleges in the US. Here she became active in the civil rights movement, attending the 1963 March on Washington, and studied with such influential radical historians as Howard Zinn and Staughton Lynd. She grew impatient with the restrictions at Spelman, however, which at the time saw its mission as turning “black girls into refined ladies and teachers.” (Edelman)

With the help of Lynd’s mother Walker received a scholarship to the élite Sarah Lawrence College in New York. Mentored by teachers and poets Jane Cooper and Muriel Rukeyser, Alice devoted herself to becoming a writer; her early efforts “bowled over” the entire writing faculty (White 105).

“What’s different about Alice is that she had the most incisive way of telling the truth….She wrote with a daring and force that separated her from the rest.” (Cooper in White 104, 105).

A summer spent in Kenya and Uganda exposed Walker to the ravages of colonialism and disillusioned somewhat her enthusiasm for the African independence movements of the 50’s and early 60’s. An unintended pregnancy brought her near to suicide; when she miraculously was able to obtain an illegal abortion, she produced a flood of poetry that (through Rukeyser’s efforts) later became her first book publication, Once (1968). After graduating with honors from Sarah Lawrence Walker worked briefly for the welfare office in New York City, but soon realized that it left her little time for writing. She accepted a summer job in Mississippi with the NAACP Legal Defense Fund, working to establish the civil rights of poor blacks in the deepest of the segregationist South.

Here she met and fell in love with her co-worker, the young Jewish civil rights lawyer Melvyn Leventhal. They married in 1967 despite the sharp disapproval of his mother and the fears of her family and their friends for their safety – in Mississippi “miscegenation” was condemned and biracial marriage illegal. Daughter Rebecca was born in 1969. Alice Walker often felt overwhelmed trying to combine motherhood with writing and teaching (she held positions at Jackson State, Tougalou College, and later at the University of Massachusetts Boston, Wellesley College and Brandeis University): “I was afraid I could not be a successful writer and a mother at the same time.” (White 182)

But her drive and talent had already set her on an inevitable path, and her first novel, The Third Life of Grange Copeland, about the distortions of black masculinity and its ultimate redemption, was published in 1970. Walker returned to the north on a fellowship at the Bunting (now Radcliffe) Institute (1971), and a second poetry collection, Revolutionary Petunias and Other Poems, and the short story collection In Love and Trouble: Stories of Black Women appeared in 1973. To an interviewer’s question about her preoccupations as a writer, Walker replied:

I am preoccupied with the spiritiual survival, the survival whole, of my people. But beyond that, I am committed to exploring the oppressions, the insanities, the loyalties, and the triumphs of black women. … For me, black women are the most fascinating creations in the world. (Interview with John O’Brien, 1973, as reprinted in Walker, The World Has Changed: Conversations with Alice Walker, ed. Rudolph P. Byrd, 40.) 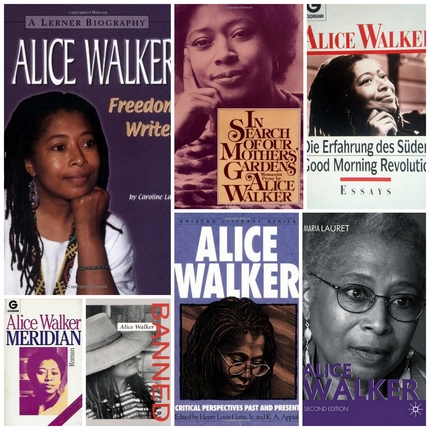 Back in New York City, Walker became an editor at Ms. Magazine and began a long-term collaboration with Gloria Steinem. In 1976 she published Meridian, a novel dealing with the personal and political conflicts of the Civil Rights movement. Walker’s commitment to supporting black women writers, already evident in the pioneering college courses she introduced at Wellesley and elsewhere on black women’s writing, was further demonstrated in her literary resurrection of the forgotten Harlem Renaissance writer Zora Neale Hurston. Walker traveled to Florida to find and place a stone at Hurston’s unmarked grave; she later edited a collection of her writing and published influential essays on Hurston and her role as a model for black women writers like herself.

Walker and Leventhal divorced in 1976 and two years later she relocated to San Francisco, which she hoped would be more conducive to her writing than New York. She had also begun a 13-year relationship with Robert Allen, then an editor for the academic journal The Black Scholar. In California Walker was able to complete her next and most famous novel, The Color Purple. The novel, which “tackles issues of incest, domestic violence, lesbianism, religion, racism, poverty, and motherhood as manifested in a poor, black southern community,” not only garnered critical acclaim and literary prizes, but also generated controversy and criticism, largely based on the charges that it portrayed black males in negative ways and featured a positive presentation of a lesbian relationship (Gillespie 10). The book was made into a film by director Steven Spielberg that launched the acting careers of Whoopie Goldberg and Oprah Winfrey and was nominated for 11 Academy Awards. Presumably in part because of the opposition it had engendered, the film did not win a single Oscar.

In 1983, the year after The Color Purple appeared, Walker published her most famous collection of essays, In Search of Our Mothers’ Gardens: Womanist Prose, in which she set forth her concept of “womanism” as “a black feminist or feminist of color,” “a woman who loves other women, sexually and/or nonsexually,” and who loves women’s culture, music, dance, the spirit and herself. Her definition would transform the field of black women’s literary criticism (Gillespie 11) and had a major impact on feminist analysis in general. By the end of the 1980’s Walker had ended her romantic relationship with Robert Allen and turned to other lovers, both women and men, among them Tracy Chapman (White 451).

Walker’s writing and activism since The Color Purple reflect concerns beyond her early primary focus on black women. Peace, spirituality, female genital mutilation, care for the planet are among the themes that predominate in the novels, poetry and essays of this “second phase” of her career. Among the best known are the novels The Temple of My Familiar (1989), “a complex narrative that attempts no less than a rewriting of world history” (Gillespie 13), and Possessing the Secret of Joy (1992), Walker’s fictional exploration of the roots and devastating effects of female genital mutilation.

Walker continues to speak out on the issues she cares about through public appearances and publications; moreover, her official web site, Alice Walker’s Garden, houses a blog on which she regularly practices her belief that “writing is an essential strategy against oppression.” (Gillespie 15).

The Official Site for Alice Walker: AliceWalkersGarden.com. Available online at http://alicewalkersgarden.com/, checked on 1/15/2014

Deutsche Nationalbibliothek: Literature by and about Alice Walker. Available online at https://portal.dnb.de/opac.htm?query=118884433, checked on 1/15/2014

Walker, Alice (2006): We are the Ones We Have Been Waiting for. Inner Light in a Time of Darkness. New York, N.Y: The New Press. (Amazon)

Walker, Alice; Vitale, Stefano (2006): There is a flower at the tip of my nose smelling me. 1st ed. New York: HarperCollinsPublishers. (Amazon)