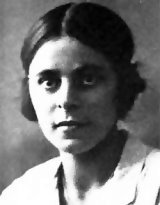 South Tyrolean “Catacomb Teacher” during the rule of Fascism

During the time that Italy’s Fascist government prohibited the use and teaching of the German language in German-speaking South Tyrol, Nikoletti gave secret instruction in German and was persecuted for it by the authorities. Sickly from an early age, she was not able to recover from a pleurisy that she had contracted in prison, and, after months confined to her bed, died of consumption.

With her death a myth was born: Especially for those marksmen and other? South Tyroleans who have always seen in the Italian language an enemy to be fought, she has become a martyr, a regional Joan of Arc. It is still claimed that she died either as a victim of persecution by the Podestà, or because of being banished from her home village, or through suffering imprisonment: “The ax of Fascism came down upon her head,” according to one booklet about the teacher from Kurtatsch. And from a newspaper only five years after her death: “She had given her life for her homeland. Her German heart could bear no bonds.”

Angela Nikoletti, the daughter of a midwife and a poor day-laborer, was born into a tense political atmosphere and grew up in a borderland between German-speaking and Italian-speaking Tyrol. Her mother was often sick and unable to care for her two children, who alternated among aunts or were placed here or there in care. Their father served for years in World War I. Angela’s sister died young of appendicitis; her mother also died early. Angela began working as a servant; when she was 13, she tore down the posters which proclaimed that South Tyrol was now a part of Italy.

In the last months before her own death Angela Nikoletti composed a diary in which she reviewed her entire life and expressed her views about events of the day. South Tyrol had been joined to Italy by the Treaty of St. Germain in 1919; the South Tyroleans had been promised that they could continue to speak German and follow their own customs. But with Mussolini’s seizure of power, the Lex Corbinio of 1921 and the Lex Gentile of 1923, not only were all German schools closed, but the teaching of German was forbidden and Italian was established as the official language. _ In spite of a poor wartime grade school education Angela passed the entrance examination for the teacher-training school of the Sisters of Mercy in North Tyrolean Zams; she attended the first year but was refused permission to leave South Tyrol for her second year: she had become a suspicious figure and an enemy of the state by going to school in North Tyrol, and a poem she had written with the title “Tirolerland” had been discovered. Not until a year later was she allowed to return to North Tyrol, and finished her training in July 1926 with a grade of “Very Good” (the highest grade). By this time the Lex Gentile was long since in effect and all German-speaking teachers had been sent into retirement, let go or transferred to southern Italy – unless they had adapted to the new circumstances.

For Angela there was no hesitating; since it was impossible to teach German in an official capacity, she would do it unofficially, following the teaching of Canon Michael Gamper, editor of the South Tyrolean Volksbote, who had written that one must imitate the early Christians who found refuge in the catacombs of Rome. Secretly she began, like many women throughout the land, to teach reading and writing in her sitting room or kitchen to at most five children at a time, up to 30 per day. The girls came alone and without schoolbooks, carrying their knitting to disguise their activity and not attract attention. One or two hours later they would leave, with a new poem and Tyrolean songs in their heads.

Like Nikoletti, some 500 women, mostly unmarried and without families, gave secret instruction in German; they were seldom and only minimally compensated. The fact that occasionally a teacher was found out, banished to South Italy or sent to prison was soon common knoweldge, but did not keep the women from continuing what they regarded as their duty. They were all young and – probably for that reason – fearless. 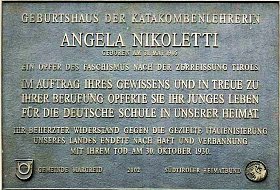 Angela Nikoletti received several warnings, and, since she continued to teach undeterred, was taken into custody on 14 May 1927 by a unit of the Carabinieri and jailed. She was sentenced to 30 days in prison. When she was released she was banished from her home community. She hid in a cave on the Grauner Joch not far from her birthplace. Someone betrayed her, and the Podestà ordered her to leave the region. But an Italian physician made an official diagnosis that she was so weakened that she would not survive the winter. Only then was she allowed to return home to her aunt in Kurtatsch. For a time she had the company of a young neighbor, Anton Weiss, until he decided to study theology – for Angela the catalyst for a series of very sad poems.

Her last diary entry is from July, 1930; Angela was too weak to write after that. She died on 30 October 1930, and was laid out at home. Her burial turned into a public rally; the entire village attended and many came from neighboring villages.

Admiration of Angela Nikoletti exists even among Italians. In 1975 the Circolo Angela Nikoletti was founded in Bolzano, a cultural organization 80% of whose membership has consistently been from the Italian-speaking population. Even today a little book about Angela Nikoletti’s life is distributed by the leftist antifascist movement to its new members. Its subtitle: Victim of Fascist Barbarism.

Evening. Interrogation. I’m supposed to confess everything. Who hired me to give lessons, who pays me, from which families I teach their children, etc. […] _ I answered: If they’re so curious they should go looking themselves. They found me, after all. They didn’t get any more out of me. My aunts from Tramin wanted to bring me an evening meal. Both of them were thrown out, together with the food, with threats and taunts. […] At 11 at night they brought me to this damp cellar. I leaned against the cold, wet wall till morning. Tired, discouraged …(From Angela Nikoletti’s Diary)

In prison, May, 1927. Exhausted, I fell onto the wooden bunk. I felt abandoned and alone. I had time to think over all their threats…. I had smiled when they pronounced them, and now in the dim loneliness they made me shudder. I imagined them being realized. My fantasy was working better than was good for me. All of a sudden everything seemed terrible. And I thought of Noldin and Riedl. What if their fate were to become mine too? The threats made it seem likely. I was overcome with fear and homesickness. I could not eat, drink or sleep. None of my family or friends was allowed visit me. Through the long nights I shivered from the cold. I could only close my eyes for a brief quarter of an hour before I would wake from a horrible dream. And each day I grew more exhausted.

Finally, on May 19, I had my court hearing. I requested a mirror and a comb. I was shocked when I looked into the mirror. Could that be me? A greenish-yellow, narrow face looked back at me. Seven snow-white hairs gleamed on the left side. Yes, could that really be me? It almost made my head spin. Such huge changes in such a short time. I also felt that my dress and underwear were too big for me. Is it possible that trouble and suffering can have such deep effects? – I had to experience it in myself. _Seven men were present and I was alone. The sentence read: 30 days conditional detention, five years police observation, and – most bitter for me – banishment from my home Kurtatsch. – Where to, then? (Angela Nikoletti)