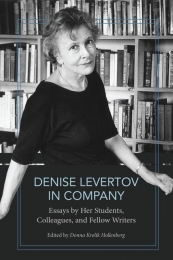 From a young age, Denise Levertov had a strong belief in her calling as a poet. Born near London in 1923, Denise Levertov spent her formative years in England. She was home-schooled by a Welsh mother, who adored her and imbued her and her older sister Olga with languages, the literature of the nineteenth century from Jane Austen to Leo Tolstoy, art, music, a deep knowledge of Christianity, and love for the natural world. Her Russian-Jewish father was a prolific scholar and Anglican priest who—after having converted to Christianity—devoted his life to the reconciliation of Christians and Jews. Her parents supported refugees from Nazi Germany and instilled a strong social conscience in her.

During World War Two she worked as a civilian nurse in London, experiencing first-hand the constant danger and the “drabness” of life at war. Her first book of poetry, The Double Image (1946), was written during that time.
New opportunities opened up for Levertov when she met her husband, the American novelist Mitchel Goodman, in Geneva in 1947 after an unhappy love affair and a recent abortion. They married quickly and moved to New York City in 1948. A year later their son Nikolai was born. She was glad to leave war-ravaged Europe behind her.

In the U. S. William Carlos Williams soon became her mentor. He showed her “the rhythm of speech as poetry” and helped her find her voice as an American poet. In Robert Creeley and Robert Duncan of the Black Mountain School she found “comrades” with whom she explored the craft of poetry.

Levertov encountered James Laughlin, the founder of modernist New Directions Publishing Corporation, in Paris, then again in New York at the urging of Kenneth Rexroth, who had included six of her poems in his 1949 New Directions anthology New British Poets. After Laughlin solicited Levertov's fourth volume of poetry, With Eyes at the Back of Our Heads, for publication in 1960, she became a staple on the New Directions list. She was one of the few women in his prestigious press alongside such iconic modernists as Gertrude Stein and H.D.  As her biographer, Donna Krolik Hollenberg writes, “’joining New Direction’s list […] was ‘awe-inspiring’ because of all that the press represented: being included with so many American and European writers she regarded as mentors gave her validation that no other publisher could impart. Over the years Laughlin would become a close personal friend whose literary judgment Levertov trusted completely.” (Hollenberg, 161-62).

Now part of an elite circle of leftwing avant-garde artists, Levertov was invited to poetry readings all over the country and abroad, was awarded a Guggenheim grant, served as poetry editor at The Nation, received numerous poetry prizes such as the Shelley Memorial Award and the lucrative Lannan Award, and was elected to the American Academy of Arts and Letters. She also taught poetry seminars as tenured professor at Stanford and at universities across the US for almost 30 years.

Throughout her life, Levertov was deeply concerned with social justice and political action, from movements against war and nuclear annihilation, to the protection of the environment, to the support of revolutionary campaigns in Central America. She and her husband were outspoken critics of the Vietnam War. Levertov helped found The Writers' and Artists' Protest against the War in Vietnam, edited an anti-war poetry anthology for the Draft Resisters League in 1967, and called for political action at her poetry readings and in her college classes. Her husband was one of the Boston Five on trial for promoting draft resistance in 1968. She experienced tear-gassing and billy clubs, was jailed and wrote about her experiences both in her poetry and in essays. The Poet in the World (1973) includes an account of her visit to The People's Republic of Vietnam with her friend and fellow activist, the poet Muriel Rukeyser, in 1972. Amidst the destruction and suffering she saw “genuine revolutionary solidarity” and wrote: “I cling to the need for revolutionary optimism.”

Levertov's poems often reflect the places and experiences of her life. Many of them feature life as a woman in the 20th century: marriage and motherhood, sexual desire, the relationships with her parents and sister, being a poet and an activist. Early on in her career, she had left rhyme and meter behind as anachronistic. In Some Notes on Organic Form Levertov writes “Form is never more than a revelation of content”. It emerges as the poet attends to the rhythm of her experience. The written poem is like a musical score, meant to be read aloud.

Levertov saw writing as a sacred act of transformation, not the expression of raw emotions. Therefore she was critical of Confessional Poetry on mental breakdown and abuse. For Levertov the roots of poetry lie in “song, magic and… high craft” (Light up the Cave, 126) and many of her poems convey a deeply sensuous response to the beauty and mystery of nature.

At the young age of 12, Levertov had turned away from the Christianity of her parents, finding it too restrictive. In the tumultuous years after her divorce in 1975 and her mother's death two years later, however, she looked for spirituality and the experience of God in her own personal and unorthodox way. When she converted to Catholicism in her mid-sixties, she saw it as her role to criticize the hierarchy and the inflexible dogma of the Church from within. She wrote a requiem for Bishop Romero and the four American nuns killed in San Salvador and later collected her religious poetry in The Stream and the Sapphire, which was published in 1997, the year she died. In her final interview with Nicholas O'Connell she talked about the connection between writing poetry and praying: “…in certain ways writing is a form of prayer.”

Levertov will be remembered as a woman of passionate convictions and one of the major American poets of the twentieth century.
(Text from 2022)

“Though my favorite poets were all men, I had enough faith in myself, or more precisely enough awe at the magic I knew sometimes worked through me not to worry about that…I didn't suppose my gender to be an obstacle to anything I really wanted to do.” (Autobiographical Sketch 1984. New and Selected Essays, 262)

“The poet is in labor. She has been told that it will not hurt but it has hurt so much that pain and struggle seem, just now, the only reality. But at the very moment when she feels she will die, or that she is already in hell, she hears the doctor saying, “Those are the shoulders you are feeling now”—and she knows the head is out then, and the child is pushing and sliding out of her, insistent, a poem.”
(Denise Levertov, The Poet in the World, 107)

“Poets owe to Poetry itself a loyalty which may at times be in conflict with the demands of the domestic or other aspects of life. Out of those conflicts, sometimes, poetry itself re-emerges. For example, the impulse to reconcile what one believes to be necessary to one's human integrity (such as forms of political action) with the necessities of one's inner life… motivates the attempt to write engaged or “political” poetry that is truly poetry, magnetic and sensuous.”
(Autobiographical Sketch 1984, 263)