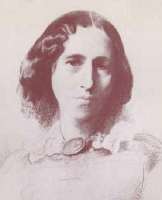 The great realist George Eliot, one of the most important writers of the 19th century, published Scenes of Clerical Life, which is the ‘“prelude” to the seven novels for which she is famous, relatively late in life at the age of 38. Thereafter, however, she wasted no time and in three years (1859-61) published three novels that are considered world class literature: Adam Bede, The Mill on the Floss, and Silas Marner. Her audience loved her mix of humour, wisdom and empathy; these novels sold very well, as did her later novels Felix Holt, Romola, Middlemarch, and Daniel Deronda. George Eliot and her life-partner, the man of letters and scholar George Henry Lewes, needed this success because besides providing for themselves they had to support his wife Agnes, the three sons he had with Agnes, and the four “illegitimate” children Agnes had with Leigh Hunt. Eliot’s incredible literary output was also made possible because she was ostracized from society for her relationship with the married Lewes (hence also the masculine pseudonym) and thus had to devote little time to social engagements.

Mary Ann Evans was born in Warwickshire as the youngest child of the estate manager Robert Evans and his second wife Christina, née Pearson. For a girl of her time she received a relatively good education in diverse boarding schools. After the age of 17, however, she had to keep house for her father, as her mother had died. She continued to care for him until his death, by which time she was 30. She used these years for intensive foreign language study and wide-ranging reading – after all, this autodidact from the countryside became one of the leading intellectuals and literary figures of her time. From the age of 22 on, she was in touch with friends in Coventry whose philosophical analyses shook her Christian faith. For two and a half years she worked on a translation of David Friedrich Strauss’ The Life of Jesus, receiving neither remuneration nor credit for her work. Her publisher Chapman knew how to take further advantage of her efficiency and undemanding nature: in the 1850s, practically single-handedly and again without pay, she made his Westminster Review into one of the most important literary and philosophical journals of the British Isles. Her work as editor and publisher also brought her in contact with the leading minds of her time, among them George Henry Lewes. Although they could not marry, they moved in together in 1853 – in Victorian England an outrageous scandal. Their relationship lasted 25 years, until Lewes’ death in 1878; it was an extremely happy and intellectually productive union.

A year and a half after Lewes’ death George Eliot married her financial advisor J. W. Cross, who was 20 years her junior. Again a very daring act, similar to her break from Christianity and her “life in sin” with Lewes. The ecclesiastically blessed union did not last long. Seven months after the wedding George Eliot passed away of heart failure. (Transl. Ute Methner and Joey Horsley)