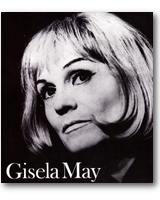 Gisela May, the actress and diseuse known and respected in many countries, is unfortunately almost only quoted in this country with a sentence from the TV series Adelheid und ihre Mörder: “Don't always say Mutti to me!” However, she became famous primarily as a theater actress - including eleven years at the Deutsches Theater in Berlin, thirty years at the Berliner Ensemble - and as an interpreter: Brecht songs based on compositions by Kurt Weill, Hanns Eisler and Paul Dessau were her special trademark for several decades.

The extraordinarily versatile and committed actress grew up in an artistically and politically alert, hospitable home, which she herself characterized as “wonderful.” The mother, Käte May, an educated woman with an unerring sense of style, is an actress and communist. Ferdinand May, the father, a writer, social democrat and opponent of the war, works as a merchant during the Second World War, as he is endangered because of his political views. After 1945 he becomes head of cabaret, later chief dramaturge of the Leipziger Bühnen. He writes several books. The Mays raise their children at a distance from the ruling National Socialist system.

Gisela receives a comprehensive musical education at home, with Brecht's “Threepenny Opera” instead of pop songs, with records by Ernst Busch and Lotte Lenya, with choir and piano lessons.  Her piano teacher Alfred Schmidt-Sas, a beloved and admired friend, teaches her to know and love classical music, trains her literary taste, takes her to the theater. (He is later executed in Plötzensee - a slogan directed against the war suffices as a cause for condemnation). Already at school, her urge for acting becomes noticeable; Gisela is considered a joker and a clown. Gisela May's childhood is also marked by many terrible experiences: war and the Nazi era, the loss of her brother (missing), hunger and rubble. She escapes from the horror into “the pure world of a humanistic art”, and already at the age of thirteen she knows that she wants to become an actress. This desire is welcomed and supported by her parents. After middle school she has to do a compulsory year - she does the heaviest housework and gardening for a Nazi family. From 1940 to 1942, Gisela May attends the theater school in Leipzig.

She describes the following period as her “apprenticeship and wandering years” - engagements at various theaters and the most diverse roles show her versatile talent: 1942 Komödienhaus Dresden, 1942/43 Landesbühnen Danzig, 1943/44 Stadttheater Görlitz, after the war at the first performances in the fall of 1945 back in Leipzig at the Städtische Bühnen, 1947 Staatstheater Schwerin under Lucie Höflich - she gradually becomes known nationwide -, 1950/51 Landestheater Halle. In 1951, Wolfgang Langhoff brought her to the Deutsches Theater in Berlin - an important change for her artistic development that left a strong mark on her. Promoted by Langhoff, she works her way into the front row of the theater ensemble through reliable performances. She plays a wide variety of roles and is not confined to one type - critic's quote: “Her specific uniqueness is versatility.” That has advantages and disadvantages. One of the disadvantages: Leading roles are usually cast according to type, so she gets to play some roles much later than she had hoped. Around this time, Gisela May gets her first roles in film and television productions, and she shows a whole new side in her celebrated excursions onto the musical stage.

Gisela May, politically left-wing due to her childhood experiences and upbringing, decides to join the Socialist Unity Party of Germany (SED) and becomes politically active (e.g. she works as chair of the Berlin district organization of the art union for a long time). Her time at the Deutsches Theater marked the start of her “second career” as a diseuse. The beginning is anecdotally recorded: in 1957 she sang as a substitute in a Brecht-Weill program; Hanns Eisler heard her and encouraged her to continue singing, and subsequently became an understanding supporter. Ernst Busch, Marlene Dietrich, Helene Weigel, Edith Piaf, Lotte Lenya - May mentions these names when asked about role models in the broadest sense.

Italian theater man Paolo Grassi paves the way for her on the international stage: enthusiastic about her performance skills, he makes her an offer to appear with her own program. She developed an enthusiastically received Brecht program based on compositions by Hanns Eisler, Kurt Weill and Paul Dessau, and further success was not long in coming. Further solo programs follow (Tucholsky, Kästner, cabaret chansons, etc.). At the age of more than thirty, May marries. Georg Honigmann, a Jewish German, came from English exile and is a founding journalist at ADN and editor-in-chief of the “Berliner Zeitung” and divorces his Jewish wife because of her. After a fling in Italy, for Gisela rather insignificant, but for her husband a disaster, the marriage is divorced.

May belongs to the Deutsches Theater until 1962, when she moves to the Berliner Ensemble (BE), Bertolt Brecht's theater, directed by Helene Weigel. For thirty years, until 1992, she will remain a member of this ensemble. A new learning process begins. The BE's way of playing is different from what she is used to: expressive possibilities are not used in an illustrative way, but independently of each other; “breaks” are conspicuously presented instead of smooth transitions when changing moods and attitudes. Special emphasis is placed on scenic work, on understanding the role in its overall context. In 1965, May meets and falls in love with Wolfgang Harich (after his stay in prison for conspiracy against Walter Ulbricht, the chairman of the Council of State). They lived together until 1974 and remained friends until Harich's death.

In 1969, Gisela May began her teaching activities on chanson interpretation, which continued into old age, and she became an extraordinarily sought-after lecturer at home and abroad. This work took her to Sweden, Finland, Norway, Italy, Belgium and Switzerland. In 1972 she becomes a member of the Academy of Arts (GDR) and in 1993 of the Academy of Arts Berlin and Brandenburg. In 1978 she plays for the first time the role in which she probably becomes best known: Mother Courage. What was difficult for her was to find her own interpretation independent of the overpowering role model of Weigel, who had previously played this character at the BE. She succeeds after massive initial difficulties - Mother Courage is considered the high point of her acting development, and she plays it as long as she works at the BE.

May's immense workload during GDR times includes theater work (Berliner Ensemble, guest performances in other theaters, including musical theater), appearances as a chanson and song interpreter and cabaret evenings with Alfred Müller, tours to numerous countries in Europe, America and Australia, participation in festivals, record productions (25 records until 1988), television productions (approx. 30 during GDR times), work as host of the entertainment program “Die Pfundgrube”, dubbing and roles in motion pictures. In the wake of the political turnaround in the GDR, Gisela May is dismissed in 1992 after thirty years of affiliation with the BE by a new five-member Intendanz during the interim period. She falls “into a deep hole.” But even that is not the end - she soon starts working again: first at the theater (Renaissance Theater and others), later mainly in television, e.g. as the mother of Evelyn Hamann in the series “Adelheid und ihre Mörder”. She also returned to the stage of the Berliner Ensemble with an enthusiastically acclaimed Brecht-Weill program. By now very old, but mentally lively, May gave interviews and did not shy away from stage appearances, but sang only rarely in front of an audience. The fact that she was hardly ever offered any more roles annoyed her - and she could no longer hear the word “still”... 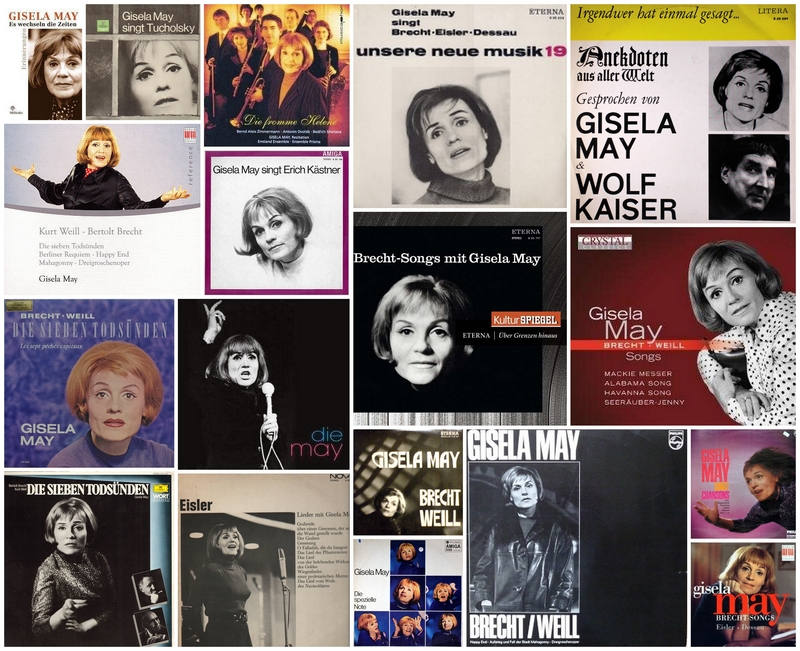 Nobody discovered me. My artistic path went uphill unsensationally, laboriously and slowly. There was no question that I had to follow it.

This profession is our life. We are addicted to ever new engagement with it. We are addicted to it, skin and hair. When I understood this inescapability, I grew a kind of love-hate relationship with it over the years, as a kind of resistance. It was only when my acting work was joined by music that I stepped onto firmer ground again. Dimensions opened up that were predominantly pleasurable. New possibilities of expression were released. For me, the main task of the actor is to help the audience from the stage to gain knowledge about their environment, and in doing so to address their intellect and their feeling (as Brecht demands) in equal measure and to convey to them the pleasure of thinking, of thinking further. One of the peculiarities of Brecht's poetry is that he uniquely integrated the song, the Lied, into the drama. In Brecht, therefore, not only my interest in the performing arts, but also my love of sung performance found the best of templates, so that it became almost necessary for my artistic development to give priority to the interpretation of his work.

Quotes on Gisela May

Gisela May is one of the most intelligent European actresses of our epoch, a modern and truly “complete” actress in the absolute sense of the word. (La Voce Republicana)

Both as a singer and as a reciter, Gisela May has proved to be an ideal interpreter of Brecht, of a simplicity and practicality that is the fruit of long labor. (La Stampa, Turin)

Gisela May showed us a great sensitivity in an extremely differentiated performance: harshness, meanness, love, longing. Every mood was able to grip the audience. (Neue Zürcher Zeitung)

As for the singer and her richness of nuances, one is tempted to speak of an ensemble, even if it consists of only one woman, who artistically has as much to offer as sometimes seven others. (Lothar Kusche)It is not “Gisela May” - it is “Die May”! That is a term for us, the term of political song and chanson, as it is unique for us. (Paul Dessau)

She is not flirtatious, she is not bitchy, she does not even have the ploy with the broken voice or the unpromising, wreathed diseuse bedroom look; she also does not adorn herself with critical profundity or effective longing. She doesn't need all that, because she has verve, intellect and voice. (Süddeutsche Zeitung) 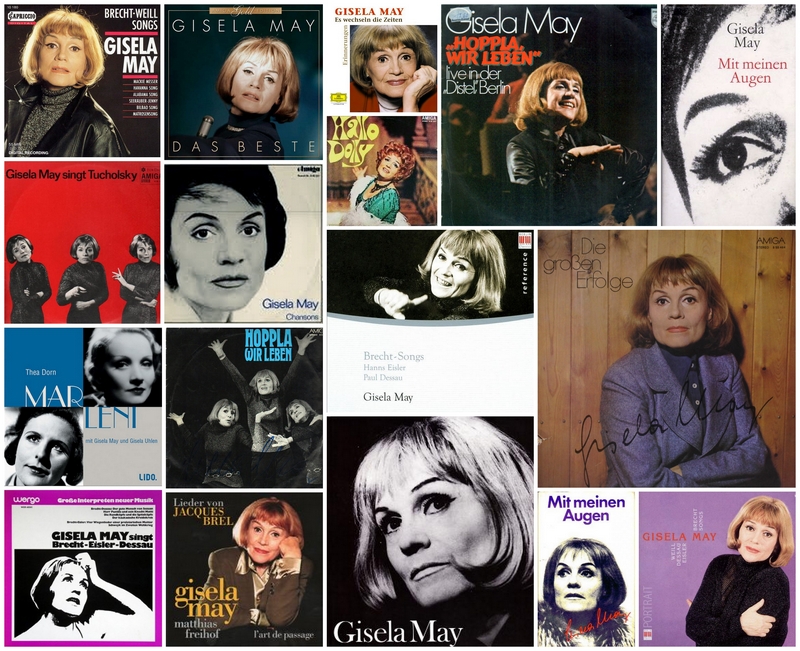