Against Sexism in Pair Skating

Pair skating is a figure skating discipline. International Skating Union (ISU) regulations describe pair teams as consisting of "one lady and one man." The sport is distinguished from ice dancing and single skating by elements unique to pair skating, including overhead lifts, twist lifts, death spirals, and throw jumps. (Wikipedia).

These defining remarks from the always helpful Wikipedia are – as is often the case – linguistically very interesting:

First of all, Wikipedia finds it appropriate to explain to us precisely what is meant by a “pair.” In this day and age, after all, there are all sorts of pairs, partners or couples, all the way to same sex married couples, a phenomenon of the 21st century which has been spreading like wildfire, even into Catholic Ireland and the evangelically infiltrated USA. Compared with that, pair skating appears as a bastion of backwardness, and Wikipedia has to remind us of that through its cumbersome definition of “pair”: "one lady and one man."

overhead lifts – who lifts, who hovers? throw jumps – who is thrown and who throws? death spirals – who is intentionally submitted to mortal danger?

Wikipedia makes no mention of this. It apparently assumes that everyone knows: in classical pair skating it’s the woman who is thrown. Just as in real life. And she’s the one who is lifted up by the man and whose hair is dragged along the ground.

Recently the Tagesschau (German TV news) presented an interview with the repeated medal winner in pair skating, Robin Szolkowy, who now trains the next generation of German competitors in the sport. He informed the audience about the requirements for it: The girls can’t be short and delicate enough and the boys can’t be tall and strong enough, since the girls have to be hoisted, after all. 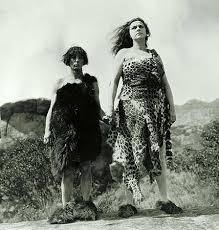 The picture shows Buster Keaton with his playmate. Both pissed off, because they weren’t accepted as pair skaters.

They are right! Pair skating is perhaps the most sexist sport there is and should be reformed. And: the overdue new regulations explained below should be applied without delay to other sexistically organized sports such as ice dancing and ballroom dancing as well.

2. That a tiny woman always has to be paired with a gigantic man is also disgustingly discriminatory and totally out of touch with the times. Tall, strong women who develop an irresistible passion for pair skating must no longer be excluded! They should pair themselves with little men, who can now finally also follow their dreams and don’t have to lead a sad life in the saddle as jockeys, far from the ice rink. How many small men don’t dream of being lifted high in the air and dramatically thrown away by powerful women, of writhing before them on the ground in the terrible death spiral!
(trans. Joey Horsley)