Women of the week

At the moment the online database holds 12931 records.
For instance:

German resistance fighter, saved the lives of many Jews, veterinarian 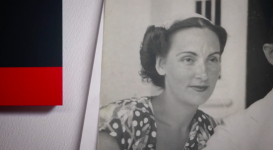