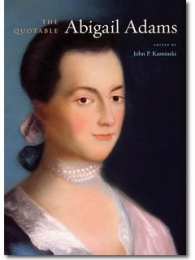 Abigail and John Adams were married in October 1764, a few days before John's 29th and Abigail's 20th birthdays. The two loved and respected each other all the 54 years of their marriage. Yet this marriage was subject to severe trials and stresses: revolution and war, years of separation, early deaths of four children. Abigail gave birth to six children between 1765 and 1777, three girls and three boys. Only the oldest and the youngest son survived their parents. The youngest daughter was stillborn, and the second died at 14 months. The second son, Charles, succumbed to his alcoholism at age 30, and the firstborn, Nabby (diminutive of Abigail) died miserably of breast cancer in 1813 at age 47.

Abigail and John kept up a lively correspondence as John traveled extensively for work, first as a district judge in Massachusetts, later as a delegate to the Continental Congress in Philadelphia, and finally for years as a U.S. diplomat in Europe. It was not until Abigail visited her husband in Paris in 1784 and eventually moved with him to London, where he served as the first U.S. ambassador, that the period of worst separations was over. In 1789 John became vice president and eight years later president, and although Abigail and John could now be in the same place more often for longer periods, government business and representational duties left them little time for a private life. That only became possible during the last quarter of their marriage.

In 2010, their discoverer Joseph J. Ellis wrote that the 1,100 or so letters Abigail and John exchanged were a treasure trove of unexpected intimacy and candor, more revealing than any other correspondence between famous U.S. spouses. He considers Abigail's letters to be better and more colorful than John's - this is all the more remarkable given that Abigail had had no schooling to speak of and John was considered one of the best letter writers of his time.

At the end of March 1776 - a few months before the adoption of the Declaration of Independence of the 13 colonies against the “mother country” Britain - Abigail wrote those bold sentences to John for which she became famous and which are quoted again and again whenever she is mentioned: “Remember the Ladies! (Don't forget the ladies!). In context, it reads like this:

And by the way, for the new code of laws that you will have to write, I suppose, I would like you not to forget women and be more generous and benevolent toward them than your ancestors were. Do not give such unrestricted power to husbands. Remember, all men would be tyrants if they could. If women are not given special care and attention, we are bound to stir up rebellion, and we will not feel bound by any laws in which we have no say and are not represented.

John replied that he could only laugh at her admonition, for “the abolition of our masculine systems would subject us entirely to the despotism of the petticoat.”

Abigail and John were each other's equals in strength of character and mind, but the ruling “masculine system” (patriarchy) had intended for him to be the leader of the team and for her to be the servant. She could not openly rebel against this, but she found ways and means to realize her “early feminist program” anyway. Many of the men in her family were not up to the leadership role assigned to them: they fell into drunkenness (Abigail's only brother William and her sons Charles and Thomas), they remained professionally unsuccessful and/or speculated and got hopelessly into debt (her brother-in-law Richard Cranch and her son-in-law William Smith). The victims of these overextended and failed men were their wives and children, whom they left penniless. Abigail took care of them, lending or giving them money and/or taking them into her home. Her mother, the pastor's wife Elizabeth Quincy Smith, had already practiced active charity until she was exhausted and died: during one of the numerous smallpox epidemics of the time, she cared for the sick, became infected - and died at the age of 55.

But how did Abigail manage, virtually unnoticed by her husband, to earn the money for her charity and manage it independently? Actually, wives were forbidden by law to own property. Under the law of “coverture,” husband and wife were one person, and that person was the husband. Legally, the wife did not exist; anything she earned, made, or inherited automatically belonged to her husband. Since John was away so much, he entrusted her with the management of the house and the cultivation of their small farm, giving instructions and advice by letter, but essentially Abigail was on her own for months and eventually years - and that in wartime. She ran an import business, for which John had to send her ribbons and similar fashion items from Paris, which she could then sell in Boston at a very high profit. What she did not use for running expenses she put into securities, including bonds issued by the young state. Unlike many of her male relatives, she generally speculated skillfully and made considerable profits. Her uncle Cotton Tufts acted as “straw man” or trustee (as a wife she was not allowed to do any business).

The crowning achievement of her feminist as well as business experience and conviction was her will: Except for her two surviving sons, all male relatives were excluded from the windfall she could distribute. The money went to her granddaughters, nieces, female cousins, daughters-in-law, sister-in-law, and two female servants. It was not distributed equally, but according to need: the poorer one was, the more she inherited from Abigail.

We owe this important biographical “detail” to Abigail's biographer Woody Holton, who was the first person ever to take an interest in Abigail's business and financial transactions. Other biographers also studied the will but failed to grasp its clearly feminist intent. They simply did not trust Abigail to actually “foment rebellion” as threatened.
(Text from 2017; automatic translation by DeepL 2021)

(For sources, further reading and illustrations please refer to the original German version (click on the picture of the German flag above).

Her letters—pungent, witty, and vivid, spelled just as she spoke—detail her life in times of revolution. They tell the story of the woman who stayed at home to struggle with wartime shortages and inflation; to run the farm with a minimum of help; to teach four children when formal education was interrupted. Most of all, they tell of her loneliness without her “dearest Friend.” The “one single expression”, she said, “dwelt upon my mind and played about my Heart….”