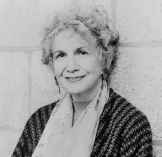 Canadian author, winner of the Nobel Prize for Literature, 2013

Four weeks after the 9/11 attacks Alice Munro’s short story “Comfort,” which has nothing at all to do with terrorism or action, appeared in The New Yorker magazine. It is a very private, quiet story about grief, loss and beginning again. The fiction editor at the magazine declared in an interview that after the disaster he couldn’t have thought of any better story than this.

Literary critics are unanimous in considering Alice Munro to be the most significant living author of short stories—despite the fact that her fiction deals with everyday problems of “ordinary” (and mostly female!) people in seemingly boring Canadian small towns. Munro comments: “There are no such things as big and little subjects. The major things, the evils, that exist in the world have a direct relationship to the evil that exists around a dining room table when people are doing things to each other.” And: “The complexity of things—the things within things—just seems to be endless. I mean nothing is easy, nothing is simple.”

Munro is often called “Canada’s Chekov,” to which one critic commented: “This comparison is a reviewer’s cliché, but it fits so perfectly that it remains unavoidable. She possesses Chekov’s sharp eye for detail and his empathy with persons of every sort.”

After her relatively late debut with Dance of the Happy Shades (1968), the result of 15 years of literary work, Munro has published over 10 more collections. Since the 1980’s she has gained a German readership; today every new Munro book is translated at once as a matter of course.

Alice Laidlaw was born in 1931 in the vicinity of Wingham in the Canadian province of Ontario. Her father’s silver fox farm was not able to maintain itself in the Great Depression of the 1930’s. Alice found that she had no talent for the role of the genteel lady that her mother had in mind for her three daughters; she escaped to the world of books. In 1941 her mother fell ill with a rare form of Parkinson’s disease to which she succumbed in 1959. Munro reproached herself because she had followed her strong drive to write instead of supporting her. “If I had been a different kind of woman, with more immediate warmth, instead of this inner fire, I could have been very helpful to her.”

In the 1950’s she married Jim Munro and bore four daughters; Catherine, the second, died shortly after she was born. In 1963 the Munros opened a bookstore in Victoria which soon made a good name for itself. During these years Munro struggled to piece together time for writing; she managed by writing short narrative forms and by constantly thinking about her characters and plots while doing housework or caring for her family. She separated from her husband in 1972; in 1976 she married the geographer Gerald Fremlin, with whom she still lives.

“More than any writer since Chekhov, Munro strives for and achieves, in each of her stories, a gestaltlike completeness in the representation of a life. She always had a genius for developing and unpacking moments of epiphany. But it's in the three collections since Selected Stories (1996) that she's taken the really big, world-class leap and become a master of suspense. The moments she's pursuing now aren't moments of realization; they're moments of fateful, irrevocable, dramatic action. And what this means for the reader is you can't even begin to guess at a story's meaning until you've followed every twist; it's always the last page or two that switches all lights on.” (Jonathan Franzen, 2004)