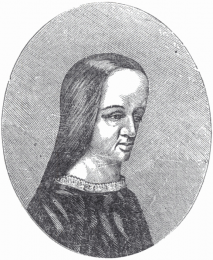 Ann Lee (originally Lees) was the primary founder of American Shakerism, the movement which produced the longest-lived communal religious organization in U.S. history. The daughter of a blacksmith, Ann Lee grew up without schooling, working in a textile mill in Manchester, England, a small city just then on the brink of industrialization. She married Abraham Standerin, also a blacksmith, in January 1762, and, according to Shaker tradition, the couple had four children that died in infancy.

Considerably before her marriage, in 1758, Ann Lee had become a member of a small dissenting religious society headed by tailors Jane Wardley and her husband James. The Wardley society “professed to be resigned, to be led and governed, from time to time, as the spirit of God might dictate,” according to Thomas Brown, an ex-Shaker who published one of the earliest accounts of English Shakerism's origins. Jane Wardley acted as mother of the sect, hearing religious confessions of sin and leading meetings at which shaking and shouting out against sin were seen as ecstatic bodily expressions of spiritual fervor (Brown, in Garret, 141-2). Schooled in the Wardley society's traditions of Protestant mysticism and pietism, as well as female religious leadership, Ann Lee experienced intense visionary and ecstatic “gifts,” including a striking revelation in 1770 that celibacy was a precondition for a life modelled on Christ's. Lee now became the acknowledged leader of the “Shaking Quakers,” as the Wardley society came to be called, and in the next several years they became increasingly obnoxious to their neighbors and to civil and religious authorities on account of their militantly disruptive activities within churches. Verbal attacks on the churches and clergy, for failing to teach what was necessary to salvation in the approaching day of judgment, led to mob attacks on some of the Shakers, arrests and jail sentences. This “persecution,” along with a schism within the Wardley society's ranks, were probably what caused Ann Lee and a small number of followers to migrate to the American colonies in 1774.

Within a few years the English Shakers had established their church on a tract of land in Niskeyuna, near Albany, New York. Niskeyuna (later Watervliet) was an isolated “wilderness” base from which they were able to take advantage of the religious revival sweeping New York and New England during the Revolutionary War  era. As in England, the Shakers' unconventional religious behavior and uncompromising anti-church public testimony brought them to the attention of civil authorities. Their militant pacifism and English origins led to the jailing of Lee and members of her inner circle as possible British sympathizers in July of 1780, and this increased their notoriety. The following year, Ann Lee, along with her brother, William, and a third British Shaker leader, James Whittaker, began a two-year missionary tour through Massachusetts and Connecticut, which laid the basis for the founding of the first New England Shaker communities in the years immediately following Lee's death. Within a year after returning to Niskeyuna, both Ann Lee and her brother William died, leaving James Whittaker, Joseph Meacham, Lucy Wright, and a few other of Ann Lee's inner circle to organize the many new converts into a highly structured group of separatist, celibate communal societies, under the central authority of Ann Lee's successors.

Ann Lee's charismatic authority is amply documented in an aural-historical volume based on the memories of her American followers and designed to preserve her sayings and doings as a kind of sacred scripture (Testimonies of the Life, Revelations, and Doctrine of Our Ever Blessed Mother Ann Lee, 1816). In this volume, some of Ann Lee's closest followers, many of them female, recalled (long after her death) both her sufferings under persecution and her experience of spiritual transformation or new birth, which she apparently likened to childbirth. She was also remembered as an awe-inspiring, even frightening figure of power – one who, as seer, could reveal the spiritual condition of the living and the dead, and who, as spiritual mother, displayed her devotion to her “children” through often harsh punishments or threats designed to help them put away soul-killing sin.

The Shaker religion and culture that flourished and evolved after Lee's death was not entirely her own creation, but in many of its practices and values it embodied her spirit. Its religious-based celibacy certainly honored Ann Lee's visionary understanding of sexuality as sin. The requirement that Shaker brethren and sisters confess their sins to their religious elders recalled the practice of her own spiritual mother, Jane Wardley. The governance structure of the society of communities, in which equal numbers of male and female leaders oversaw both spiritual and industrial and domestic work, can certainly be said to pay tribute to the impact of Ann Lee's foundational leadership.

It seems unlikely from the surviving evidence that she herself claimed to be the “second appearing of Christ in the female,” an event deemed necessary to complete the redemptive process begun when Christ appeared in male form. This was a claim made for her by a few of her influential American followers in The Testimony of Christ's Second Appearing (1808), an early published work designed to rationalize and codify Shaker beliefs in a period of intense missionary activity in Kentucky and Ohio. By the mid-nineteenth century, a four-part, gender-balanced godhead, including Holy Mother Wisdom and Ann Lee as aspects of divinity, had been theorized by male Shaker theologians. Mother Ann and Holy Mother Wisdom spoke through living Shaker sisters in the rituals of midcentury spiritualistic revival, but contemporary Shaker scholars are still assessing the significance of these “apparently” feminist elements of Shaker theology and religious practice for the believer (Procter-Smith, Mercadante, Humez).

Ann Lee herself spent only ten years on American soil, conducting a public ministry during just the last four, and never writing a line. Yet her spiritual experience and ability to communicate it were the driving force behind a complex American religious dissent movement. After her death, this movement crystallized into a religious communal organization that has existed for over two hundred years. Shakerism is still vital, though the number of believers is small, in the first decade of the third millennium, at Sabbathday Lake, Poland Spring, Maine.
(Text from 2003)

Procter-Smith, Marjorie. 1985. Women in Shaker Community And Worship: A Feminist Analysis of the Uses of Religious Symbolism. Lewiston. Edwin Mellon.