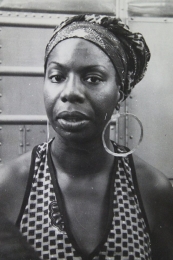 The spectacularly talented musician performed jazz, blues, folk, pop and protest songs to devoted fans in the US, England, Europe and Africa for decades. Trained as a classical pianist, she began singing in clubs to earn money. Her rapid rise as a popular performer who could play and sing anything did not prevent her from being exploited by record companies and managers, and her subsequent life-long sense that she needed a strong male protector did not always serve her well. Nonetheless, between 1958 and 1974 she recorded more than 40 albums. From 1964 to 1974 Simone dedicated herself to the US civil rights movement, inspiring activists young and old with her powerful songs against racist oppression. She wrote the passionate “Mississippi Goddam” in 1963 after Medgar Evers was murdered and four little Black girls were killed in a racially motivated church bombing. She later wrote: it “was my first civil rights song, and it erupted out of me quicker than I could write it down” (S/C 90). Emotionally unpredictable, Simone often berated audiences and eventually made erratic life-choices that clouded her early success. She was ultimately diagnosed with bi-polar disorder and relied on loyal supporters to help her manage life in later years.

The sixth of eight children, Eunice Waymon was born into a poor but highly musical family in the relatively liberal resort town of Tryon, South Carolina. Her mother was a Methodist minister and domestic worker; she fostered her daughter’s early talent by enlisting her to play the piano several times a week for her church services. Eunice also accompanied her mother to her work as a housemaid, and thus came to the attention of one white employer who insisted that the gifted child receive piano lessons. A fund was created to support her education, and she was offered a scholarship to the music program at Oberlin College. But after graduating from high school she decided to spend the summer of 1950 studying at the Julliard School in New York, preparing to audition for admission to the prestigious Curtis Institute of Music in Philadelphia. She was not selected, however, and would later come to believe that her rejection was due to racial prejudice, although only 3 of 72 applicants were admitted.

She continued her lessons, hoping to apply again, and did various jobs to earn money. On the suggestion of a friend, she took a summer job in 1954 performing at the Midtown Bar and Grill in Atlantic City. The owner told her she would have to sing as well as play piano. She soon had a following of young fans, who began to come regularly to hear her mixture of classical, jazz and blues. Afraid that her moralistic mother would learn that her daughter was making “the devil’s music,” Eunice took the stage name of Nina Simone – Nina from “niña,” as an early boyfriend had called her, and Simone from French actress Simone Signoret. At this time, still hoping to become a classical performer, she developed her unique style of incorporating lines of counterpoint (as in the music of Bach) into her jazz and blues numbers.

Among her earliest successes were a recording of “I Loves You, Porgy” (1958), which she had learned from a Billie Holiday album, and her own album Little Girl Blue a year later. She sold the rights to this album outright for $3000 to Bethlehem Records, which eventually cost her over a million dollars in royalties. Simone developed an increasing distrust of record companies, as well as of the clubs and theater owners who booked her.

Soon a favorite performer in Greenwich Village, Simone was especially popular among the gay and lesbian crowd; she often hung out after performing at one of the Village lesbian clubs. But in 1961 she married Andrew Stroud, a tough New York policeman, who temporarily put an end to her gay relationships and eventually became her manager. The couple had one daughter, Lisa Celeste Stroud, born in 1962. Lisa would later become a singer and actor herself, taking the stage name Lisa Simone (Kelly). Andrew Stroud was an effective but controlling manager of the increasingly famous performer; he pushed his wife to keep an at times exhausting schedule and abused her physically on at least one occasion: ﻿“He treated me like a horse, a nonstop workaholic horse,” she said in 1999 (Light 175).

As a performer, Simone had associated with Black activist and intellectual circles in New York, including such figures as James Baldwin, Langston Hughes and Malcolm X. But it was her friendship with playwright Lorraine Hansberry, author of A Raisin in the Sun, that led her to become actively involved with the civil rights movement. “Lorraine started off my political education, and through her I started thinking about myself as a black person in a country run by white people and a woman in a world run by men” (S/C 87). After Hansberry’s early death, Simone paid tribute to her with the song ”To Be Young, Gifted, and Black,” referring to an unpublished play of her friend. (The song was later named the Black National Anthem by C.O.R.E., the Congress on Racial Equality.) Once motivated, Simone committed herself to the movement: “After the murder of Medgar Evers, the Alabama bombing and ‘Mississippi Goddam’ the entire direction of my life shifted, and for the next seven years I was driven by civil rights and the hope of black revolution” (S/C 91). Simone performed at an event celebrating Black Power activist Huey P. Newton in 1968, the only woman among numerous Black speakers on stage. Angela Davis, one of the event’s organizers, wrote of her powerful effect: “It was Nina Simone’s voice that bestowed on that gathering an aura of historical transcendence …. In representing all of the women who had been silenced, in sharing her incomparable artistic genius, she was the embodiment of the revolutionary democracy we had not yet learned how to imagine. At that moment we were no longer powerless individuals but rather a formidable collective force that was ﻿moving irreversibly in the direction of radical change” (Light 151-152). In 1969 Nina Simone performed at the Harlem Cultural Festival, featured in Questlove’s 2021 documentary Summer of Soul. Faced with growing white backlash, her political stance evolved from an early emphasis on non-violent protest towards support for the Black Power revolutionary agenda. As Angela Davis put it, “She made the transition from movements demanding the acknowledgment of our rights as citizens to insurgent movements calling for the economic and political restructuring of our society” (Light 170).

Exhausted by the strain of her performing schedule and disappointed at the failure of the struggle to bring the change she wanted, Simone was also experiencing a deterioration of her mental condition. She suffered from depression and fits of anger; an early effort to diagnose her condition medically had not been successful. She would later be diagnosed at different times with multiple personality disorder, schizophrenia and bipolar disorder.

In 1970 she abruptly fled the country for Barbados, without telling her husband. While there she enjoyed a time of freedom from the demands of work and gained some insight into herself, as she wrote in her diary: “However, some things have come quite clear to me—for instance that I am stuck between desire for both sexes…” (Light 162-63). Returning to the US, she agreed to maintain a professional relationship with her husband and continued performing. But troubles with the US tax authorities as well as her deteriorating mental state caused her to again leave the US, first back to Barbados, then, at the suggestion of Miriam Makeba, to Liberia, followed by Switzerland.  During the 1980’s “she stayed everywhere and nowhere” (Wikipedia), and her performances became ever more unpredictable – she would cancel at the last minute, appear two hours late, insult the audience, break off in the middle of a song and leave the stage. Eventually she returned to Europe, first Paris, then in 1988 to Nijmegen, Netherlands, where with the help of loyal friends and fans, she was given medical help, regained some stability and began to perform more successfully again.

Simone finally relocated to the south of France and died of cancer in 2003. Two days before her death she was informed that the Curtis Institute had awarded her an honorary doctorate of Music and Humanities.