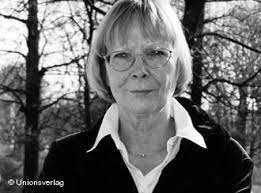 They must think he writes in German!

Two and a half shelves are filled with the books that my mother translated during her lifetime. Now they will move to me. My mother has died.

Back when she carried the big blue clay pot from East Prussia, at the age of three, at the end of the war, protected by her grandmother and older siblings, or later, when she went to school in Bernau over the rampart, with big bows in her hair, and also when she received an award, for raising the most money for the construction of the high-rise building on the Weberwiese in Berlin - back then, no one could have imagined that this girl from Bernau, daughter of a machine knitter and an accountant, would one day go out into the whole wide world, leave the melancholy small-town Sundays behind her and study a language that no one in this country understood at the time: Arabic, a language that would carry her out to cities with fabulous names - to Cairo, to Damascus and Beirut.

If it hadn't been for the Bernau public library, where she read, read and read, and then came across a book entitled: “Bent over ancient manuscripts”, if it had not been for the teacher who gave her the idea of learning this language that the foreigners spoke at the union college, and if it had not been for the school principal who accused her of immaturity when she expressed the desire to study this subject, then perhaps her defiance would not have awakened and her stubbornness, then the wanderlust that drove her from the small town to Berlin and from there to foreign lands would not have been so great. 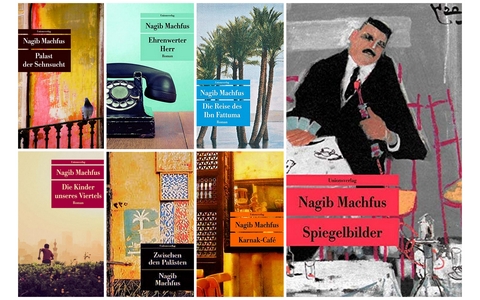 But so my mother enrolled in Arabic and Romance studies at the Humboldt University, learned throat sounds, learned to write from right to left and to turn pages from back to front. Her German handwriting was gradually joined by her second, Arabic, in which she would note, for example, what Christmas presents she wanted to get, a very familiar but never decipherable cipher. In the subway, when Arab men would communicate in their language about the pretty blonde student sitting across from them, this student would say goodbye with a casual “Maas salam” as she got off the train!

When she was offered to go to Cairo for an additional year of study, but on the condition that she leave me, then just five months old, behind in the GDR as a pawn, she knew it was the chance of a lifetime. On the wall of her Cairo room she hangs the plan with the meals to be given to the infant in Berlin, outside in the Egyptian everyday life she learns the Arabic colloquial language, begins to interpret and gets together with young authors whose life's work will later also become her life's work. Back in Berlin, she works for Deutsche Welle radio, at the Weimarer Beiträge, and eventually returns to Humboldt University for her research. While still in the GDR, she began working for the Zurich publishing house Unionsverlag, and from then on translated year after year at least one book by the future Nobel Prize winner Nagib Machfus, as well as works by Mohamed Choukri, Gamal Al-Ghitani and many others. 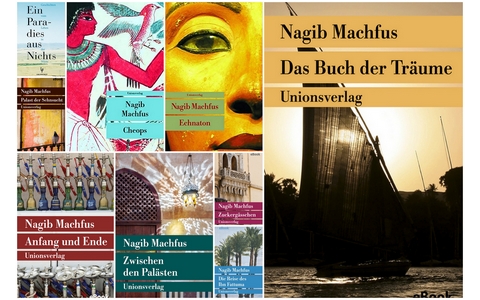 When in 1995, in the course of the evaluations at the HU, a section for Arabic Studies was not established, she was dismissed despite her extensive knowledge. From then on, she started her own business as a translator. From then on, she sits at her desk for eight hours a day. She manages a maximum of two or three pages a day and gets paid as much as a plumber for a trip, but that never diminishes the obsession with which she pursues the words. She leafs through dictionaries, searches for original sources for quotations, draws floor plans for the apartments in which the novels are set, family trees for the families of the main characters, she grapples with customs and terms that seem untranslatable because the concept of God, the rituals, the things of everyday life, food, clothes, simply everything is different from Prussia or Switzerland. Did the father at the beginning of the book also already have five children or four? Was there already cement in Cheops' time? Is Allah God? She writes lists of questions for the authors, meets with native speakers who can justify a political allusion to her, sends versions back and forth, corrects flags, she discusses turns of phrase that she always insists on being translated in the gestural sense, not just from word to word.

While she sits in her very quiet Berlin room, she lives in the alleys of Cairo's old city, lives in Bedouin tents, in Algiers or Riyadh - lives in her books. And it always annoys her when reviews praise the language of the authors she translates without mentioning her name: “They must think he writes in German!” As a translator, she leads a shadowy existence, slipping into the writer's mind, taking a back seat to the author's name, and yet she gives her passion, her life experience, her very own language for that of the other. If she is asked what the most beautiful thing about translating is, she will say: to be someone else for a while.