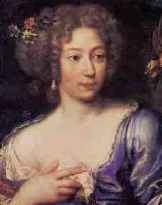 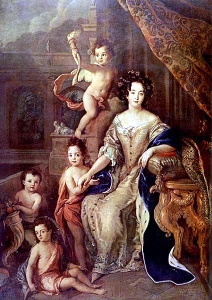 The numerous mistresses of Louis XIV, the French Sun King, added special splendor to his magnificent court. Their careers depended on beauty, wit, and often sophisticated intrigue. There was a kind of hierarchy of mistresses from the highest (maîtresse en titre) to those only temporarily distinguished by the king's favor, the “mayflies,” as Madame de Sévigné, the most famous letter writer of the time, derisively called them. Influence, regular financial allowances, lavish gifts, and the retirement pensions that the king provided for his mistresses depended on their rank, which was determined by protocol.

The young king's mistress from 1661-1669 was Louise de la Vallière, a rather unassuming, shy blonde who was devoted to the king with selfless love. She was succeeded by the Marquise de Montespan, the second maîtresse en titre, who pursued her intention to win over the king with all the means of feminine seduction and mischievous intrigues against rivals. Because she was beautiful, witty, entertaining, stimulating, and always in a good mood, Louis made her a favorite, yet without giving up on the patient La Vallière.

The Montespan came from a distinguished noble family, had been educated in the convent of Saintes and was introduced to the court at the age of 20. She married the Marquis de Montespan, with whom she had two children.

The luxurious life at court, with diversions of all kinds, balls, theatrical performances, ballets and fireworks, appealed to her immensely, as did costly dresses and expensive jewelry, with which the king lavished her. She shared with him an interest in the performing arts and music. Dramatists (Racine, Corneille, Molière) and composers (Lully), architects and garden artists were promoted. The Marquise was involved in everything and was soon the most envied woman at court, but not very popular because of her ruthlessness and sharp tongue.

When the king traveled, including to battlefields and to visit troops on the borders of his kingdom, a carriage with the three ladies - his wife Marie Thérèse, the Lavallière and the Montespan - had to accompany him. The people spoke derisively of the “trois reines”, the three queens. The Montespan gave birth to eight children of Louis, who legitimized all of them and later even enforced that they were included in the succession and throne alongside the legitimate descendants. 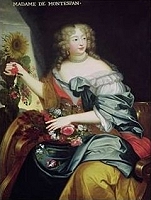 In France, as in other royal courts, mistresses were nothing unusual. However, the Catholic Church caused great difficulties for Louis because of his relationship with the married Marquise de Montespan. The husband also demanded that his wife return to him, threatening her with violence until the king had him arrested and banished. Now the Marquise could once again indulge in her life of luxury without any worries and enjoy unrestricted harmony with the king. It was not until the so-called “poison affair” - Montespan is said to have used poison, sorcery and black masses against her rivals and even the king - that the relationship soured and finally ended. In 1691, the Marquise voluntarily left the court, gave herself over to a life of repentance and penance, cared for the poor and suffering, and died in Bourbon l'Archambault in 1707, mourned neither by the king nor by her children.