Harriet Beecher Stowe was one of the most popular American writers of the 19th century. Today she is best known for her anti-slavery novel Uncle Tom's Cabin, which was printed in over 40 languages, but she also produced several other novels and numerous short stories. She often took inspiration from her experiences growing up in a large, devoutly religious family in Protestant New England. Stowe's father, Lyman Beecher, was a Congregational minister, known for his evangelical sermons and moral reforms; Roxana Foote Beecher, mother of Stowe's eight full siblings, was a well-read and educated woman in an age when few women were literate. She died when Stowe was four, leaving Catharine, her oldest daughter, to fill the maternal role for Stowe for the rest of her life. 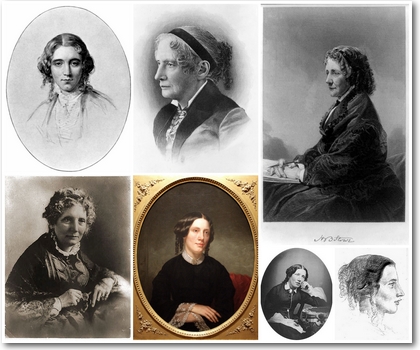 Born into an intelligent and ambitious family, Stowe received an unusually rich education for a girl. She read avidly in her father's study any material she could find: old sermons, theological texts, and a tattered old copy of Arabian Nights. She benefitted from the pioneering spirit of her sister Catharine, a believer in equal educational opportunities for women, who opened a school for girls in Hartford, Connecticut. Stowe studied and later taught at her sister's seminary, learning such subjects as math, history, geography, logic, moral philosophy, and Latin. Stowe's religious and moral education progressed as well, and at the age of thirteen, she confessed to her father that she had experienced conversion after one of his sermons. Religion was a powerful force throughout her life, a theme running through her writing, and the source for continuous self-investigation and dissatisfaction with the state of her soul.

When Lyman Beecher accepted the position of president at Lane Theological Seminary in Cincinnati in 1832, both Catharine and Harriet moved with the family to Ohio. There Stowe wrote a children's geography text which Catharine used in her new school, where Stowe continued to teach. Both sisters joined the Semi Colon Club, a literary club sponsored by their uncle; Stowe was able to take part in frequent literary discussions and found an instant audience for her work. There she met Calvin Stowe, a professor and theologian, whom she married in 1836.

Harriet Beecher Stowe had seen her fiction first published in the Western Monthly Magazine in 1834 upon winning a contest for her story “Uncle Lot”; now she continued to produce little stories and serials to provide additional money for the ever poor and ever expanding Stowe household; within the first four years of her marriage, Stowe gave birth to four of her seven children. She began contributing to one of the most popular and prestigious women's magazines, Godey's Lady's Book, in the 1840s, and by 1843, a collection of her stories was published under the title The Mayflower. She began writing her most famous work, Uncle Tom's Cabin, in installments for the magazine National Era in 1851; it was finally finished and published a full year later. 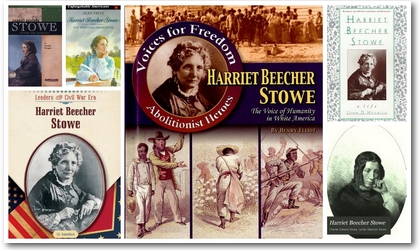 Stowe's antislavery convictions were originally inspired by her father's evangelical Christian beliefs in human equality, but were brought to fruition especially by the move to Cincinnati, where Stowe was able to witness closely the brutality and pathos of the slave system and the increasingly violent clashes between abolitionist and pro-slavery factions. Stowe did not side absolutely with the abolitionists, but rather felt that the Southern slave owners too were victims of the system and had to be peacefully extricated from their ownership of other humans. Her book won instant acclaim, and earned her hatred from the South. Stowe wrote the factual Key to Uncle Tom's Cabin in response to the critical and pro-slavery literature that sprang up immediately. The sudden enormous fame and popularity of the novel ensured the success of her subsequent works, in most of which she returned to the familiar landscapes and characters of her New England Protestant heritage. Among the most praised are Dred: A Tale of the Dismal Swamp (1856), The Minister's Wooing (1859), The Pearl of Orr's Island (1862), Agnes of Sorrento (1862), Palmetto Leaves (1873), Poganuc People (1878). She began writing fiction for the Atlantic Monthly, a new magazine, in 1857, which she continued for the remainder of her active career.

Throughout her career, Stowe was encouraged and supported by her husband and family. She helped her youngest child Charles write her first official biography in 1889. Becoming senile at the end of her life, Stowe wrote, “my brain is tired out;” she died of brain congestion on July 1, 1896 in Hartford.

“Are there any lives of women?” “No, my dear,” said Mr. Sewell; “in the old times, women did not get their lives written, though I don't doubt many of them were much better worth writing than the men's.”(HBS, from The Pearl of Orr's Island)

I wrote what I did because as a woman, as a mother I was oppressed and broken-hearted, with the sorrows and injustice I saw, because as a Christian I felt the dishonor to Christianity - because as a lover of my country I trembled at the coming day of wrath. It is no merit in the sorrowful that they weep, or to the oppressed and smothering that they gasp and struggle, not to me, that I must speak for the oppressed - who cannot speak for themselves. (HBS on Uncle Tom's Cabin in a letter to Lord Denman, January 20, 1853) 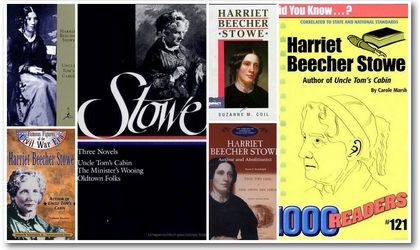