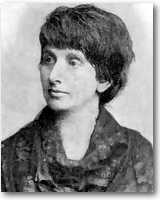 Hedwig Dohm is one of the cleverest and wittiest feminists of the last 100 years. Some of her demands for women’s emancipation have still not been realized. Her critical analyses of works by patriarchal thinkers of her day are astoundingly clear-sighted and humorous, irreverently debunking their inane claims to power and theories “justifying” oppression.

Dohm was a very modern thinker. She saw that the so-called feminine social character has its roots in education and is not determined by biology. She demanded equal education and professional training for men and women and fought for women’s right to university education and women’s suffrage. Household chores and child-raising could be delegated to institutions to enable women to pursue professional careers. Financial independence of women would ‘ethicize’ marriage, since no women would be forced to marry simply for sustenance. According to Dohm, motherly love is not a natural instinct: “Maternalism must be stripped of the layer of ideality that has been attached to it.”

Hedwig was the fourth child of Henriette Wilhelmine Jülich, who came from a poor family, and the Jewish tobacco manufacturer Gustav Adolph Schlesinger.  Her parents did not marry until 1838, after the tenth of a total of eighteen children was born. In 1851, Schlesinger, who had already been baptized a Protestant in 1817, had the Jewish-sounding family name changed to Schleh. 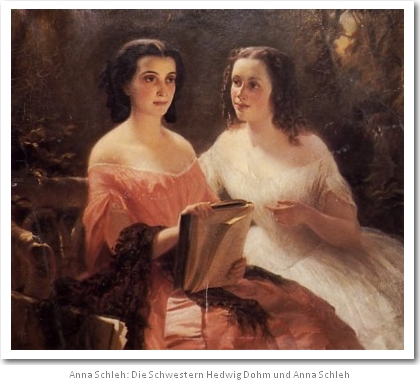 A sensitive girl with a thirst for knowledge, the young Hedwig Dohm did not have an easy childhood and youth: “I was afraid of my mother, of her violence. Heartily and with a good conscience, people were beaten back then. ... Beating and education were almost identical.” “Why did I have to read in secret, as if it were a crime? Why wasn't I allowed to learn anything? My brothers didn't want or like to learn anything, and yet were forced to do so.”

At the age of fifteen, Hedwig had to leave school and submit to the fate of a daughter of the upper class (höhere Tochter), helping in the household and waiting for a husband, spending her time engaging in pointless handicrafts/needlework (?). She fought to at least be allowed to attend a women’s teachers' college (Lehrerinnenseminar), about which she wrote the following in her first feminist pamphlet some twenty years later: “I can give the most positive assurance that ... my knowledge hardly exceeded the most elementary level and hardly reached the level of a seventh-grader ... . Nevertheless, my certificate stated that I was well qualified for teaching.”

In 1853 she married Ernst Dohm, editor-in-chief of the satirical weekly Kladderadatsch. Between 1854 and 1860, Hedwig Dohm gave birth to five children, one boy and four girls. Her house became a venue for Berlin artists and intellectuals. All four daughters (including Hedwig Pringsheim, mother of Katia Mann and mother-in-law of Thomas Mann), received professional training. They were to lead a “self-determined life”.

Her son died at the age of eleven. Hedwig Dohm's first publication, a scholarly work of 600 pages, falls into this period: Die spanische Nationalliteratur in ihrer geschichtlichen Entwicklung (1865-1867) (Spanish national literature and its historical development (1865-1867)). An incredible achievement for a woman without higher education.

It was in the first years after the founding of the German Reich that she fired off her “first salvo” of equally bold and witty feminist pamphlets, for which she is so famous today: 1872 - Was die Pastoren von den Frauen denken (What the Pastors Think of Women); 1873- Der Jesuitismus im Hausstande (Jesuitism in the Household); 1874 - Die wissenschaftliche Emanzipation der Frau (The Scientific Emancipation of Women); 1876 - Der Frauen Natur und Recht (Women’s Nature and Right).

The “second salvo” against the anti-feminists came a quarter of a century later, in 1902: Die Antifeministen (The Antifeminists). Dohm was too far ahead of her time, demanding equal rights for women and men in all domains, including voting rights. Since the desired response did not materialize, she shifted to writing comedy – and had greater success.

In the 1880s, Hedwig Dohm did not publish anything. What might have been the reason for this? Her husband died in 1883, having suffered a stroke a year earlier. The 1880s were the incubation period for the storyteller Hedwig Dohm, who would publish a steady stream of novels and stories between 1890 and 1910, that is, between the ages of 60 and 80. She was a late-comer similar to Theodor Fontane, who held Hedwig Dohm in high esteem. Moreover, in the 1880s Dohm was no longer a voice in the wilderness – a new generation of women had come of age who had learned from her writings. The women's movement was growing stronger and stronger, and the reclusive Hedwig Dohm took part, even becoming a co-founder of the association Reform [Reform] in 1888.

The elderly Hedwig Dohm, alert and writing to the very end, lived with her second daughter Elsbeth, who had married the wealthy banker Rosenberg. A pacifist, Hedwig Dohm experienced with horror the jingoism of her compatriots during the First World War. Having been one of the first to campaign for women’s suffrage, she was pleased that German women finally gained the right to vote in 1918. But the words that were probably her last, written a few days before her death, evoke her deep despair about the madness of warfare: “Did human life have any meaning at all? No, no, a thousand times no. It is grotesque rubbish or a will to commit suicide. Ridiculous, too, the pointless circumstances that the cosmos has produced through the creation of us redundant bipeds. One could laugh oneself to death. And there she was already laughing ... shrill, overloud, and she choked to death on her laughter.”
(Text from 1994)

Do not believe it must be so because it is so and has always been so. Impossibilities are excuses of sterile brains. Create opportunities.

When I read a pamphlet, such as that by Mr. von Bischof, I perceive a pounding at my temples, not as a result of mental exertion, I can assure you, but from fury.

Inactivity is the sleeping draught given to you, old woman. Do not drink it! Be something! To create is joy! And joy is almost youth.

One always feels like a ruminant in the field of women's issues.

There is no freedom for men if there is not freedom for women. If a woman is not allowed to bring her will to bear, why should the man? If every single woman has a tyrant by law, then I am indifferent to the tyranny which men experience from their equals. One tyrant for the other.

My pen is ... my shield to ward off the deadly coups that are aimed at me as a woman.

Everything I write is in the service of women.

One of the last great pains she suffered was the hideous assassination of Rosa Luxemburg. She wept long and bitterly over it. (Hedwig Pringsheim-Dohm)

She was bent like a boomerang and appeared to be barely a meter in height. ... They spoke of the fact that ... this small, legendary person lived not in the past, not in the present, but only in the day after tomorrow with generations yet to come. (Georg Hermann)