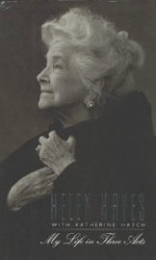 Frequently called the “First Lady of the American Theater”, Helen Hayes led a long and remarkable career as a versatile actress on the stage, radio, television, and in movies. Her mother's career as an actress gave Helen an early fondness for the theater. She launched her professional career at only five years old performing with her mother for a local stock company in Washington D.C. Encouraged and guided by her mother, Helen traveled to New York where she made her Broadway debut at age 8 while her father remained at their home in D.C. Several successful childhood roles followed. After her graduation from high school in 1917, she returned to New York where her adult acting career flourished.

Helen was married to writer Charles MacArthur from 1928 until his death in 1956. They had two children, Mary and James. Both children followed in their mother's footsteps, making acting a family tradition. After Mary's death at age 19 of polio in 1949, Helen started the Mary MacArthur Fund with the March of Dimes to help children suffering from polio and their parents. She also served as the national chairwoman of the women's division of the National Foundation for Infantile Paralysis. She lobbied and worked with the Nyack Hospital in New York to set up the first treatment and therapy department for survivors of polio in the U.S. The hospital was later renamed in her honor. Helen was associated with other charities as well, including Mother Teresa and an orphanage in Mexico.

Hayes' versatility and depth made her one of the leading stage performers of the 1920's and 30's. Moving from the light, comic roles in her early career, she became well known for her moving portraits in historical dramas. One of her most remarkable and acclaimed roles was as Queen Victoria in Victoria Regina (1935); over the course of the play, her talents were required to depict the queen from youth to old age. Hayes' success did not come without hard work. Frustrated by a lack of consistency and control in her earlier performances, she strove to gain command of her craft by taking lessons in boxing, fencing, interpretive dance, breathing and vocal production. Self-described as a small, plain woman physically, Hayes won over audiences with the power and subtle emotion of her performances. Critics and colleagues honored her with several awards, including 3 Tony awards for stage performance, an Emmy for television, and a Grammy. She won 2 Oscars, for best actress in the movie The Sin of Madelon Claudet (1931) and best supporting actress for Airport (1971). Two theaters in New York have been named after her. Helen was awarded honorary degrees from Princeton and Columbia Universities and other institutions. In 1986 she received her country's highest civilian award, the Presidential Medal of Freedom. She died in 1993 of congestive heart failure, leaving a rich legacy of 5 memoirs, performances in more than 80 plays and other productions, and her commitment to charitable causes.

QUOTES from Hayes' autobiography On Reflection (1968):

“There is probably no more spectacular inner experience, midst all the chaos of rehearsals, than the moment of truth when you first become the part and lose yourself in it. The character is infused with a life of its own and the mystery humbles one.” (p 106)

“It is realistic to develop your craft so that you can conquer fear and achieve excellence at will, so that your audience will never be disappointed and never be bored.” (p 111)