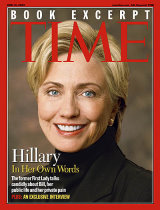 As the dynamic First Lady of the United States (1993 – 2000) and a skillful U.S. Senator (from New York) since 2001, Hillary Rodham Clinton is one of the best-known figures on the American political stage of the last two decades and a leading Democratic contender in the 2008 presidential race. Long recognized as a knowledgeable and forceful advocate of children's and women's rights and a talented and successful attorney in her own right, Clinton has also authored several books, including It Takes a Village: And Other Lessons Children Teach Us (1996), and Living History (2003), her memoir.

Raised with two brothers in a middle-class suburb of Chicago, Clinton credits her parents and her Methodist upbringing with nurturing her sense of social responsibility and commitment to service. Her father, Hugh Rodham, a conservative Republican businessman, instilled values of self-reliance and hard work. Her mother, Dorothy Howell, a homemaker and a closet Democrat, transmitted the importance of education and of standing up for oneself.

Hillary Rodham attended Wellesley College in the late 1960s, where she headed the local chapter of the Young Republicans and engaged in social activism at the college as well as national level. During these years her own sense of social justice combined with the turbulent national events – the struggle for civil rights, the Vietnam War, assassinations of public figures – helped steer her toward a Democratic Party affiliation. At Wellesley she majored in political science and minored in psychology, wrote her senior thesis on poverty and community development, was elected as president of the student government, and graduated with highest distinction. As the first student speaker at Wellesley's commencement, she came to national attention in 1969 with the publication of her speech and picture in Life Magazine. She voiced the impassioned sentiments of her generation as she rebuked commencement speaker Senator Edward Brooke for his out-of-touch remarks.

During her 3 years at Yale Law School, Hillary Rodham continued to pursue her interests in child welfare, community development, and social reform. During the summer of 1970 Clinton worked for Marion Wright Edelman's Washington Research Project, an anti-poverty advocacy organization; she continued her work for this organization, later known the Children's Defense Fund, after she graduated from law school in 1973. As part of her focus on children's welfare and the law, she expanded her studies to children's psychology and development at the Yale Child Study Center, where she helped research the book Beyond the Best Interest of the Child, by Anna Freud, Al Solnit, and Sally Provence.

In 1974 Hillary Rodham was chosen as one of 3 women on a staff of 43 lawyers tasked to prepare impeachment proceedings against President Nixon. By this time, her reputation as an attorney and children's rights advocate had won her national acclaim, and she received numerous offers for jobs at prestigious firms as well as at the Children's Defense Fund. She opted instead to join the faculty at the University of Arkansas Law School in order to be closer to Bill Clinton, whom she'd met while at Yale. Here she taught criminal law, directed the school's legal aid clinic, and pursued prison projects and advocacy work.

In 1975, she married Bill Clinton but kept her own name, a decision which proved so controversial during his gubernatorial and presidential campaigns that in 1982 she adopted the last name Clinton. When daughter Chelsea was born in 1980, Hillary Clinton strove to provide her with as “natural” a childhood as possible and to shelter her especially from the media.

During her husband's 12 years as governor of Arkansas (1979-'80; '83-'92), Clinton played a leading role in making improvements in health care, education, and children's welfare issues in Arkansas. Her work extended to national non-profit and philanthropic organizations addressing poverty and child welfare. The first female partner at the prestigious Rose Law Firm, she ranked as one of the best business-litigation lawyers in Arkansas and served on boards of directors for a number of large corporations.

Clinton's independence, strong opinions on policy, legal writings about women's and children's rights, as well as, by her own admission, her media gaffes early in her husband's presidential campaign, made her a lightning rod for conservative fears about her potential involvement in and influence over the presidency. While special investigations of the Clintons' real estate development and commodity investments during the 70s and 80s (the Whitewater investigations), and Bill Clinton's increasingly notorious sexual infidelities dominated media attention during both administrations, Hillary Clinton remained loyal and publicly defended her husband and their marriage. The third independent investigation of the Whitewater business dealings found no evidence to prove the Clintons were in the wrong, supporting Hillary's consistent assertions of innocence in this matter.

As United States Senator for New York, Clinton has pursued a leadership role in national security and defense, serving on the Senate Armed Services Committee and receiving regular briefings from military officials. After the events of September 11, 2001, she lobbied adamantly for aid to rebuild New York and to compensate the victims. Her interest in and support of military families and issues has garnered respect from different military organizations and an invitation from the Pentagon to join a panel to rethink defense. Having voted to give President Bush the authority to attack Iraq, Clinton now claims she regrets how he chose to act in starting and conducting the war.

While she appears liberal on issues of social justice, race, gun control and judicial appointments, Clinton has developed a more centrist reputation on economic issues, crime, national security and foreign policy. She has won both kudos and criticism for her bipartisan cooperation with leading ultra-conservatives such as Newt Gingrich and Rick Santorum. Her 2007 campaign to win the Democratic nomination for president has shown her to be a formidable political force; leading in most Democratic polls, this super-competent woman politician is also viewed as a polarizing figure in the nation at large.

“My parents always stressed the importance of education, working hard in school and learning as much as possible. They also encouraged me to value myself and believe in myself and do what I thought was right for me…” ( interview in TeenInk )

“Around the world today, too many women are denied what we consider human rights. By honoring the contributions of women and reflecting on the progress we have made, we can inspire women around the world who are working to change their communities and their countries. Women’s History Month is an important time to reinvigorate our belief that ‘Women’s rights are human rights.’” (Senator Clinton, in commemoration of Women’s History Month)

“....of all the jobs I've had, sliming fish was pretty good preparation for life in Washington.” (Living History p. 43)

“Although we had only a short time in each country, I wanted to meet with as many women as possible to stress the correlation between women's progress and a country's social and economic status. Development issues had interested me since my years of working with Bill on behalf of poor, rural communities in Arkansas, but this was my first serious exposure to the developing world.” (Living History pp 268-269 (Discussing a trip to South Asia in 1995))

“I had often joked in my speeches that I had imaginary conversations with Mrs. Roosevelt to solicit her advice on a range of subjects. It's actually a useful mental exercise to help analyze problems, provided you choose the right person to visualize. Eleanor Roosevelt was ideal. I had been tracking her career as one of America's most controversial First Ladies, sometimes quite literally. Wherever I ventured, Mrs. Roosevelt seemed to have been there before me.” (Living History pp 258-9)