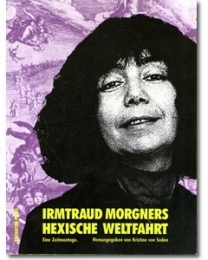 With humor, imagination, and close observation of reality, Irmtraud Morgner endeavored in her large-scale, montage-like novels to do literary justice to her basic theme, the “entry of women into history.” Her books, bold in both form and content, especially “The Life and Adventures of the Trobadora Beatriz, Based on Testimonies of Her Minstrel Laura” (1974) and “Amanda. Ein Hexenroman” (1983), took as their subject the battle of the sexes and the unrealized equality of women in the GDR. They would become seminal – both to the subsequent spate of treatments of this problem by younger women writers in her own country and to discussions within the Western women's movement.

As a child, Morgner wanted to be a locomotive engineer like her father:

Perhaps this desire revealed the seed of natural unruliness that a conventionally raised female needs in order to take a chance on eventually swimming free against the current of custom.

She dismissed her early writing, still in the tradition of socialist realism, when she began to develop her own style in the mid-1960s, in which she examined her society critically, especially as it related to the possibility of women (or men) becoming true subjects. In the first novel she has the legendary troubadour Beatriz de Dia come back after a sleep of 800 years to look for a more women-friendly climate in the GDR than the Middle Ages had offered. But the hoped-for “paradise” remains imperfect there as well. In the sequel, “Amanda,” the world is even bleaker. The witch Amanda tries to incite the other witches to overthrow the destructive male system of meaning.

Although her books were highly inconvenient to the ruling GDR authorities, Morgner received many honors (Heinrich Mann Prize in 1975, National Prize in 1977, membership of the Academy of Arts of the GDR, election to the presidium of the GDR Writers' Association). She also enjoyed great success in the West (1985 Roswitha Memorial Medal, 1989 Literature Prize for Grotesque Humor of the City of Kassel); she was invited to numerous readings and also visited the U.S. as guest author (with Helga Schütz) for the annual meeting of the association of feminist Germanists, Women in German.

After four operations and lengthy illness, Morgner died of cancer just as her nation was overthrowing the old regime. She hoped that women would show solidarity in the upheaval and fight for their own cause:

The joy of the awakening in my country almost overwhelmed me. The joy, but also the pain of being bedridden right now, of not being able to be there ...

Literature needs a certainty of the future, just like a human being. Whoever writes, promotes, and reads literature today strives to remain an optimist in spite of evil forebodings, is someone who believes that the future will be preserved after all.

Only self-discovered answers that have been lived through in one's own head leave their mark on a person. What has been talked into one's head quickly fades, is forgotten or arouses opposition.

By complaining a woman can of course annoy much less [than by mocking]. Or by scolding, either. Especially in dictatorships. Because complaints and curses are unambiguous and can be reprimanded accordingly, or even forbidden. But laughter? Laughter is ambiguous - ostensible, therefore it can also be subversive.
(Interview, Emma 1990/2:35)