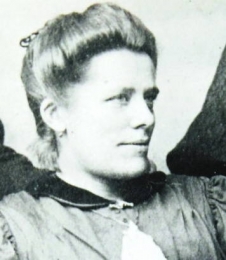 “Strong, masculinized features” (Lily Braun) marked the face of Luise Zietz – traces of a childhood and youth spent toiling in her father’s wool weaving mill: “In order to earn just the barest necessities… our mother and we children had to work, too…. We would squat for hours on the low stools behind the winding wheel doing the terribly monotonous and tiring work of winding, winding, winding….” These experiences would become the impetus for her untiring and uncompromising commitment to the Social Democratic workers’ and women’s movement, to which she had been introduced in the 1890s during her brief marriage to the Hamburg dockworker Carl Zietz. Along with Clara Zetkin, she was the most influential and popular woman activist and organizer within the Social Democratic Party. Her speeches were trenchant and critical – or “venomous,” according to police reports.

In one of her many political writings, Zietz methodically outlined how women, most of whom were apolitical, could be won over to the socialist cause. She believed that party meetings should also be entertaining, and so suggested that the local choral society open meetings by singing an inspiring song of struggle. Under no circumstances should an event be held on women’s washing day; fiery speeches should deal with current topics of interest to women. At the end of a meeting, experienced women comrades were to work the crowd with pencil and paper in hand, urging the women in attendance to join the party and subscribe to the SPD women’s magazine Die Gleichheit (Equality). In 1901 alone, Luise Zietz organized 209 such events. What August Bebel achieved with his book Die Frau und der Sozialismus (Woman and Socialism), Luise Zietz achieved with her rousing speeches: From 1900 on, the Social Democratic women’s movement grew into a mass movement.

After the law prohibiting women from joining political parties was repealed in 1908, Zietz played a key role in securing influence for women in the party by enacting relevant statutes. She was the first woman to be elected to the SPD executive committee and a member of the Reichstag for the Independent Social Democratic Party of Germany (USPD) until her death in 1922. “She had always lived far beyond her strength, and so her life could only be short.”
(Text from 1989; transl. Julie Niederhauser 2021)