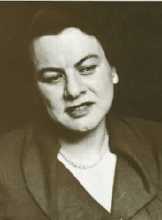 Muriel Rukeyser inspired many readers and writers of our time with her passionate, life-affirming poems and courageous, lifelong advocacy for social justice. Two important anthologies of the U.S. women's movement have lines from her work as their titles: No More Masks! (1973 ed. by Ellen Bass and Florence Howe) and The World Split Open (1974, ed. by Louise Bernikow). In her 50-year career, this enormously prolific woman published 16 volumes of poetry, three biographies, two novels, a volume of essays, translations, and six children's books. Rukeyser saw her mission as transforming herself and others through the poetic struggle to communicate, thereby making new realities possible.

Muriel Rukeyser was the first daughter of a wealthy Jewish-American family and experienced a privileged, sheltered childhood. She studied at Vassar College for two years, but quit when her father went bankrupt during the Great Depression and began writing. Because of her reporting and poetry on sociopolitical issues, Rukeyser is associated with the proletarian writers of the 1930s. She wrote about injustice against blacks in the South (in the trial of the “Scottsboro Boys”), lung disease among miners in West Virginia, and the Spanish Civil War.

In 1947, she gave birth to a son and raised him alone. During the next 15 years Rukeyser published little but continued to teach, for example, at Sarah Lawrence College for Women. Here she had to stand up to conservative moralists who saw the “single mother” and political radical as a questionable role model for their daughters.

In the last 15 years of her life, Rukeyser became fully active again, both literarily and politically. In 1972, she undertook an unofficial peace mission to Hanoi with poet Denise Levertov. Then, at 60, she traveled to South Korea as president of the American PEN Center to speak out on behalf of Kim-Chi Ha, a dissident poet sentenced to death.

From the beginning, Rukeyser's poems often had women-centered themes, criticizing the silencing of women in society, celebrating their strength, and breaking taboos – she wrote unsentimental poems about pregnancy and childbirth, menstruation, and the sexual feelings of older women. She sang about love relationships with men and with women, and in the poem “Käthe Kollwitz” cites androgyny as an important element of artistic productivity.

What would happen if one woman told the truth about her life? The world would split open.

Herzog, Anne F. & Janet E. Kaufman. 1999. How Shall We Tell Each Other of the Poet? The Life and Writing of Muriel Rukeyser. New York. St. Martin's Press.