Preliminary Note: Six hours after I had put this text online Sarah Horsley called my attention to a 2-hour video broadcast about Egypt on the “Democracy Now” web site. Approximately 90 minutes into the broadcast we are shown an extraordinary video made by the young Egyptian woman Asmaa Mahfouz and first circulated on Facebook on January 18. She calls on all Egyptian women and men to congregate in Tahrir Square on January 25 and demonstrate for their rights. Amy Goodman of “Democracy Now” comments that this video, which spread virally through all the media, is generally regarded as the catalyst for the Egyptian revolution. Many of those who went to Tahrir Square on January 25 did so because of Asmaa Mahfouz’ call for a revolution.

Here is the link to Asmaa Mahfouz’s appeal. It begins at approximately the 90th minute.

Could Asmaa Mahfouz be related to fellow Egyptian Nagib Mahfouz, who won the Nobel Prize for Literature in 1988?

Why haven’t we heard anything about her in the malestream media until now?

Here is the link to an interview with the well-known journalist Mona Eltahawy concerning the role of Egyptian women in the resistance against the regime.

128 photos showing women of the Egyptian Revolution "whose voices and faces were hidden from the public eye during the first days of the revolution".

_•••••••••••• This picture from the New York Times is captioned: “Hundreds of thousands of people packed Tahrir Square on Friday.” 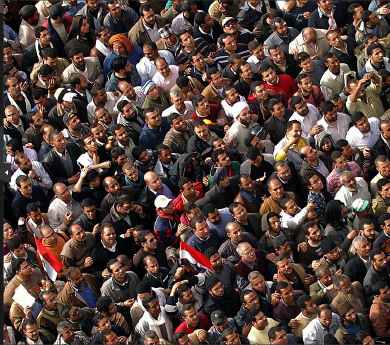 Is “the Egyptian people” made up only of men? Among these hundreds of thousands of “people” I can’t make out a single woman. And no or only very few women are to be seen in the many other images that reach us from Egypt. But the world keeps talking about the uprising or revolution of the Egyptian people, about a democracy movement. What a case of false advertising! Demos (Greek) means “the people.” What we have here is at best a demi-cracy movement (from French demi “half”).

The driving force of the unrest are young men, we hear. Men without work or the chance to have a decent life. If the Egyptian girls have not all been aborted or murdered this characterization should apply to just as many young women: unemployed and without opportunities. Why aren’t they in the streets? The men we get to see in the Western media were born of women, after all, who moreover have given birth to girls as well. Where are all these women and girls?

But most disturbing is the fact that the blatant absence of women is almost never commented on in the nonstop reporting of the Western media about the uprisings in Egypt. It is reminiscent of how most people in the Western world also hardly notice the glaring absence of women in virtually all positions of power.

Once again, the one (German) exception is Alice Schwarzer. She speaks out and warns as usual against the naïve revolution-infatuation of the West. She reminds us of Iran: how 32 years ago a hated dictator was also overthrown by the people, and how the Islamists then established their much more terrible theocracy. Have we already forgotten Marjane Satrapi’s film “Persepolis,” which takes precisely this perversion of the Iranian revolution as its theme?

Schwarzer cautions that this danger has returned – and condemns the selective blindness of Western reporting that speaks of “democracy movement” while half the population is missing or kept from participating. But this “false advertising” should be familiar to us. In ancient Greece, often referred to as the “cradle of democracy,” only very few, privileged males were allowed to participate. And Switzerland, where women did not gain the right to vote until 1971, is viewed by many as the “mother land of democracy.”

It is common knowledge that Egyptian women are subject to unbearable sexual harassment and molestation when out in public. And we should not forget that almost 100% of Egyptian women are the victims of genital mutilation (Source: Wikipedia –English).

During the French Revolution of 1789 and in the “peaceful” revolution of the Eastern bloc 200 years later women were just as actively involved as men. True, once these revolutions had succeeded, the women were shoved aside by slogans of “Freedom, Equality, Brotherhood” and by “expert roundtables” made up exclusively of men. Nonetheless, we do now have a woman Chancellor precisely from the former Eastern bloc.

In the Egyptian demi-cracy movement, by contrast, women have been few and far between from the outset. And if the revolution succeeds they may perhaps completely disappear behind the confining walls of the family, into the private sphere. Given its name, the Muslim Brotherhood is not particularly confidence-inspiring either. And the military is a further force to be reckoned with. Any women there? I haven’t noticed one.

In spite of all that: Let’s follow the example of the young Egyptian demonstrators, male or not. If just one or two million of them can topple an old Mubarak, imagine what the millions and millions of women the world over could achieve if we poured into the streets everywhere to claim our rights once and for all! (Trans. Joey Horsley)