German insiders in the field of information technology call their computers “Rechner” (calculators, computers). “You have to shut down your “Rechner” and reboot” – that’s how the initiated talk. Although I’ve owned a computer since 1983 (by now I’m on my 10th at least), it’s only recently, since I’ve read Julie des Jardins’ book on the ”Hidden History of Women in Science,” that I realize that computer originally referred to a profession: A writer writes, a computer computes, a worker works.

As I’ve learned from des Jardins’ book, professional calculating in the days before computers was by and large a female activity. In the field of astronomy, for example, endless hours of dreary computation were required – and this job was assigned to women. Men were too important for that; they were in charge of the higher order (and higher-paid) activities of theorizing about and interpreting the computed data.

The occasional woman was able to emerge from the sea of numbers and get a whiff of theoretical air. She was permitted to make her epochal contribution to astronomy – as in the cases of Annie Jump Cannon, Williamina Fleming and Henrietta Leavitt – only to be then quickly shooed back to the entry-level tasks of counting and calculating.

Since “computers” were originally women, shouldn’t the techies actually be talking about their “Rechnerinnen” (the feminine form of “Rechner”) to honor a female tradition and preserve the historical memory of an oppressive practice?

Perhaps. On the other hand, there’s plenty to be said for leaving this tradition behind for good and heading off to new shores instead. Of course, it is always a good idea to “feminize” our environment. And with that in mind I proposed, way back in 1984, that we should name the marvelous new tool the Computa (German Compute).

Is there more room for women in the higher reaches of astronomy and the other sciences, now that computational work has been delegated to the calculating machines and computas? – Not really, as we know.

Anybody who still believes that science is primarily concerned with objective truth and gaining knowledge should read des Jardins’ book. In fact, science is much more interested in fame, honor and profit – for oneself, the corporation, the university or the nation. Female competition merely gets in the way (and besides, who would then take on all the computational work, let alone the housework?) It’s a matter of mastering nature, which is often conceived as female. It doesn’t befit a woman to master nature; she is more likely to be seen as nature herself, the physical body, while man is the mind who tames it.

These cultural patterns are rooted more deeply within us than we would like to admit. Recent studies have shown that women who apply for graduate scholarships must achieve at – at least – five times the level of men in order to be perceived as equally qualified (des Jardins 292). To overcome this injustice, des Jardins calls in her conclusion for the following (292):

As more women enter science institutions, we cannot be content with statistics alone. We must ensure that the presumptions made, questions asked, and ends sought in these institutions reflect a more egalitarian, depolarized culture than that which has characterized most twentieth-century science. Until then, the scientist conjured in the American mind will be male, and the woman scientist an oxymoron, one who suffers conspicuousness and invisibility at once. 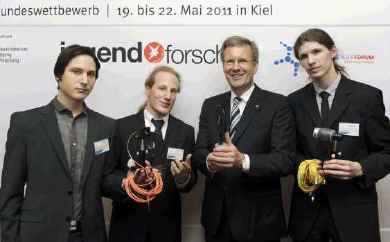 How embarrassing – but not atypical for the scientific and intellectual culture of Germany. When I had to endure my habilitation examination (oral exam on one’s advanced post-doctoral research, required for title of professor) in 1978 at the so-called Reform-University of Constance, some 60 academic luminaries sat in judgment over me, all men except for Senta Trömel-Plötz, herself just having gained habilitation and thereby admitted to the hallowed inner circle. I entered as though to an execution and barely survived the experience: for I, a linguist, had foolishly formulated my ideas so that they could also be understood by the scholars from the fields of philosophy, history and literary studies – and that seemed highly suspicious to them. In the wider world, thank goodness, things are less provincial: In July the first Google Science Fair was concluded, in which over 10,000 young people from 90 countries took part.

In each of the three age-groups the first prize was awarded to a young woman. The grand prize went to the 17-year-old Shree Bose (in photo, center), whose research involves ovarian cancer. According to Shree, all the male professors she approached with the request to work in their lab refused. A woman professor, however, responded positively …. 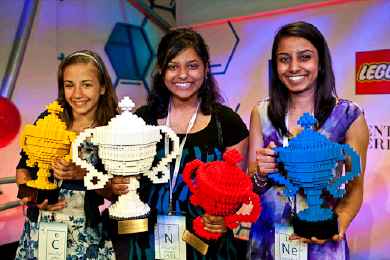 (More information here.) An important element in this was surely the fact that the 12-member jury included 5 women. By contrast, in the regional competition Jugend forscht: Sachsen (Youth Does Science: Saxony) the jury consisted of 21 men and 3 women – in other German Federal States the situation was no doubt similar.

(Thanks go to Senta Trömel-Plötz for recommending Julie des Jardins’ The Madame Curie Complex: The Hidden History of Women in Science. (2010)).