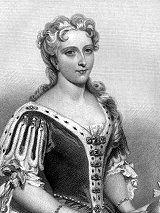 Caroline von Brandenburg-Ansbach, the first Hannoverian on the English throne, must have been an impressive person. Although only »Queen Consort«, she had a major influence on English politics and earned much respect for herself and the Guelph Dynasty, which was at first quite unpopular in England.

Born in 1683 in Ansbach in central Franconia as a princess from a side branch of the House of Hohenzollern, she came to Berlin as a 13-year-old orphan, and received there an excellent education from her godmother, the open-minded Electress Sophie Charlotte. In Berlin she met among others the philosopher Leibniz, with whom she later, as English Queen, maintained a lively correspondence.

She was intelligent and charming, blond, blue-eyed and chubby, in short an exceptionally desireable match, and at age 22 she was married to Georg August in Herrenhausen. He was the grandson of Electress Sophie of Hannover, who herself was in line to inherit the English throne. The union was unusual – although often the victim of his uncontrolled rages, Caroline always remained loyal to her husband, even when he wrote long love letters to her, the wife he admired (“in my heart nothing is hidden from you”), in which he let her share in the details of his extramarital affairs. She fulfilled her dynastic obligations in exemplary fashion: between 1707 and 1724 she bore nine children, of whom seven survived.

The turning point in her life came in 1714 when Georg August’s father was called to the English throne to become George I; that made Caroline the first lady of the land, since the King had left his divorced wife Sophie Dorothea, the unfortunate “princess of Ahlden” in Germany. Caroline devoted herself to her new task with alacrity.

She became fluent in English, in contrast to her husband and father-in-law, who were barely competent in the language of the country they ruled. Her diplomatic tact was especially important. She endeavored to mediate a conflict between George I and his son that went on for years and at times resulted in the banishment of the crown prince and his wife from St. James Palace in London; in 1720, with the help of Prime Minister Robert Walpole, she was able to bring about a reconciliation between the two.

George I died in 1727, little mourned by his subjects, and Caroline, by then 44, was crowned Queen as her husband became King. She was able to keep her confidant Walpole on as Prime Minister, and with him she shaped English policy for the next ten years, a time in which the nation was kept out of the various European conflicts and expanded its trade and colonial influence in North America and India.

Although her rather dull husband had no sympathy for her intellectual interests, she supported literary men (such as Voltaire) and artists, in particular – together with her highly musical daughter Anna – the composer Händel. Especially important was her role as patroness of the English garden, a landscape style which evolved during the 18th century; for her various residences (Richmond Lodge, Kensington Gardens and Hampton Court) she commissioned extensive structural development and redesign of the magnificent gardens from the well-known architect William Kent among others.

She knew how to prevail in private matters as well. She had the King’s relations with his mistresses more or less under her observation; for example, Henrietta Howard, for years the »maitresse en titre,« was at the same time her lady-in-waiting. And in the competition against the incompetent Frederick Louis, her first-born, she also maintained the upper hand: whenever George II was on one of his frequent long visits in Hanover he named Caroline as regent rather than his unloved son, much to the latter’s embitterment.

In death Caroline was as disciplined as in life. She suffered in secret for years from terrible abdominal pains, probably the after-effects of an umbilical rupture during the birth of her last child. She died at age 54, after doctors had performed a hopeless operation (without anaesthetic!). George II mourned deeply and long; he survived his queen by 23 years. They lie side by side in Westminster Abbey.

You may strut, dapper George, but ‘twill all be in vain,
We all know ‘tis Queen Caroline, not you, that reign.

Oh, my lord! If this woman should die, what a scene of confusion will here be! Who can tell into what hands the king will fall?

The queen loved reading, and the conversation of men of wit and learning. But she dared not indulge herself so much as she wished to do in this pleasure for fear of the king, who often rebuked her for dabbling in all that lettered nonsense (as he called it).

9 WorldCat: Caroline of England. Literature before 1900. Compiled by Almut Nitzsche for fembio.org. (WorldCat lists some titles more than once; additional searching may be necessary.)

For older literature see the WorldCat-weblink!