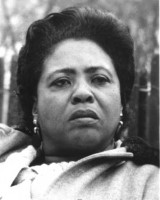 Fannie Lou Hamer was a black orator, educator, and farmer in rural Mississippi. Coming from one of the poor, rural communities in which civil rights groups organized, she became a local leader who took it upon herself not only to fight for her rights, but also to encourage others to do so.

Fannie Lou was born on October 6, 1917 in rural Montgomery County Mississippi, the twentieth child of parents Jim and Lou Ella Townsend. The family moved to Sunflower County when Fannie Lou was two years old, and she began working in the cotton fields at age six. Sharecroppers, her parents finally earned enough to rent land and buy mules and a car. However, the family was plunged back into poverty when a white neighbor poisoned the mules because he did not want to see the Townsends succeed. In 1944 the owner of the plantation on which the Townsends worked discovered that Fannie Lou could read and write, and employed her as the time and record keeper. A year later, she married a tractor driver on the plantation named Perry Hamer. The Hamers made their home in Ruleville, and Fannie Lou spent the next eighteen years as a sharecropper and plantation record keeper.

When the Civil Rights Movement came to Ruleville in 1962, Fannie Lou Hamer quickly became an active participant. With training and encouragement from the Student Nonviolent Coordinating Committee (SNCC), Hamer and several other local residents attempted to register to vote, but were unsuccessful because they did not pass the infamous literacy tests. In retaliation for trying to register, Hamer was fired from her job, received phone threats, and was nearly a victim of gunshots fired into a friend's home. But Hamer was not intimidated: by 1963 she was a field secretary for SNCC and had successfully registered to vote.

Recognizing a connection between lack of access to the political process and severe poverty among Black Americans, for the next decade Hamer balanced political work – largely voter registration, with economic work – mainly advocating for assistance programs for poor families. In 1963 she started Delta Ministry, a comprehensive community development program. A year later, Hamer helped found and became vice-chairperson of the Mississippi Freedom Democratic Party, an alternative to the “Regular” Democratic Party of the state, which excluded Blacks. Hamer’s most well-known moment of resistance came when the Freedom Democrats challenged the legitimacy of the all-white Regular delegation at the 1964 Democratic National Convention in Atlantic City. The convention leadership proposed a compromise, which included seating the all-white Regular delegation and seating two MFDP members as at-large delegates. Many national civil rights leaders urged the Freedom Democrats to accept this compromise, but Hamer and other members strongly objected, and insisted that the MFDP decide by consensus. Hamer stated that the two “at large” seats were “token rights, on the back row, the same as we got in Mississippi” (Williams, p. 243). She then led the MFDP delegation in freedom songs on the convention floor, enabling them to make a group statement of resistance in front of numerous TV cameras.

The MFDP lost the convention challenge to the Regulars in 1964, but Hamer and the Freedom Democrats continued their fight in Mississippi. Hamer ran for Congress in 1964, losing only because the Regulars disallowed her name on the ballot (she received more votes than her opponent on the “Freedom Ballots” distributed by MFDP). A year later, the MFDP unsuccessfully appealed to the U.S. Congress that Mississippi’s all white representatives should not be seated because they were elected without the participation of Black voters.

At the same time, Hamer continued her anti-poverty work. She testified before the Senate’s Subcommittee on Poverty in 1967. Two years later, she founded Freedom Farms Corporation, a land cooperative that provided poor farmers with land they farmed and lived on, and eventually purchased themselves. When the National Council of Negro Women started the Fannie Lou Hamer Day Care Center in 1970, Hamer became the chair of the board of directors.

In the last decade of her life, Hamer received wide recognition, including an award from the National Association of Business and Professional Women’s Clubs and honorary degrees from many colleges and universities. She gave numerous speeches into the 1970s. Suffering from cancer, diabetes and heart disease, Fannie Lou Hamer died on March 14, 1977 at Mound Bayou Community Hospital, not far from her home in Ruleville, Mississippi.

Because she consistently wove humor, songs, and Biblical stories into her organizing, Hamer demonstrated to others in the Civil Rights Movement and the nation that so-called “professional” skills were neither necessary nor always effective in a leader. In fact, she emphasized that every person could contribute to the Movement, regardless of class or educational background, saying, “whether you have a Ph.D., D.D., or no D, we’re in this bag together.” (Hamer, NAACP speech). On one memorable occasion, she urged people to depend on themselves to bring about change, saying “you can pray until you faint. But unless you get up and try to do something, God is not going to put it in your lap!” (Hamer, “on the day of her death” radio program.)

Sometimes it seems to tell the truth today is to run the risk of being killed. But if I fall, I’ll fall five-feet four-inches forward in the fight for freedom.

At the 1964 Democratic National Convention, Hamer demanded: If the Democratic Party is not seated now, I question America … Is this America? The land of the free and the home of the brave? Where we have to sleep with our telephone off the hook, because our lives be threatened daily?