Fleur Adcock was born in New Zealand but has lived in England since 1963. Her collections of poetry, all published by Bloodaxe, are: Poems 1960-2000 (2000), Dragon Talk (2010) and Glass Wings, (2013). She has also published translations from Romanian and medieval Latin poetry, and edited several anthologies, including The Faber Book of 20th Century Women's Poetry. In 2006 she was awarded the Queen's Gold Medal for Poetry.———A short anecdotal tribute by Jan Kemp

London, March 2011: Fleur & I have arranged to meet in the queue outside Westminster Abbey. There she is, just caught her at the door or I’d never have found her in this crowd. She gets in free as a 65+ Londoner & I pay £15. We whisk round the marble tombs, she pointing out 'ur-great uncle or aunt so and so' as we go … she’s related to half the kings & queens of England I think … 'yes, I’m writing poems for some of my ancestors', she says. At Poets' Corner we don't spend long enough for me, but she's been here so many times; then onwards amidst the flow of Japanese tourists, I find a plaque to New Zealanders in the cloister and photograph it, but she'd 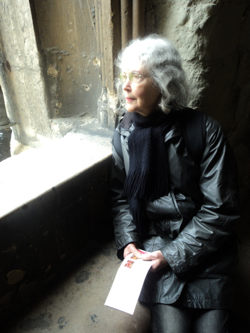 like to leave. First though, I persuade her to let me photograph her, sitting looking into the cloister courtyard - there's something so still and yet searching in her eyes as she looks into the light - all the fine elegance of her face and slight frame, the silvery hair, so fragile yet as strong as the stone pillar behind her. She's holding a leaflet, pays it not the slightest attention, yet it's firmly in her grasp. Just like the fair copy of a new poem?

We buy health food in the lane market nearby, near where she worked for years as a librarian. 'Yes, this is the building, that’s the turnstile door I went in and out of, every day'; and soon we’re sitting in St James's Park (‘St James’s Pahk’!), her, and now I know it too, my favourite London one, nestled against a tree, having a picnic and chatting. I ask a passerby to photograph us together, Fleur balks again…'but you always come out so well in photos' I assure her, thinking of her in the half-light looking out a window in that photo on the back cover of her Selected Poems, which I've just hopefully updated. Then boldly say … 'do you remember, about thirty years ago, you reviewed my book Diamonds & Gravel and said: “Jan Kemp decks her poems with flowers & jewels as if she’s advertising a boutique”'. There it’s out, after all that time, since I was cut to the core. 'Did I', she says? And we both laugh. After all, perhaps she'd been quite right. And I'm sure it helped me cut out my 'melting moments', as Sam Hunt once called them. You do learn. And why not from a true queen of poetry?! With whom you can picnic in a London park? The photo came out in Landfall 226 in 2013, along with my review of her latest collection Glass Wings.

Our first picnic was in 1987, on my first-ever visit to London when we met on the steps of the British Museum. She took out a few biscuits and offered me some. 'I always take something to eat with me', she said, 'something small'. An expatriate and a traveller's tip. I've done it ever since. We meet again many times at London and Oxford parties, when I'm there, over the intervening years and always have a chat; but I particularly remember being at the New Zealand actor Bruce Purchase’s wake when I read my poem for Bruce at Phil Thwaites’ Pacific Playhouse Theatre near the new Globe. Fleur arrived later – she’d been giving a reading herself elsewhere. We leaned against the door jamb and she bemoaned having given up smoking which she had so loved for so long. 'But you’ve got your smoking poem! And you look so well now', I said, 'and we don't now have grey faces and don't stink!' And told her I’d given up on Bloomsday 1983 in Hong Kong, partly because Nina the American had said, 'Jan you do'. These home truths. We always mentioned what we were working on - just briefly, from poet to poet. How terribly comforting it is, to know someone has been at it fifteen years longer than you have, who is still alive and kicking, still seeing and thinking and weighing up and listening to their inner voice, attentive to the world and the word, still getting it all down. With dedication. And still taking time to meet up, have picnics, talk a little. Enjoy each other's company. May you have many more years yet to write fine, fragile yet strong, intelligent, witty and very readable poems, dear Fleur! May we both have many more London picnics together!

The tribute appeared in the Festschrift dedicated to Fleur Adcock: For Fleur. Poems and Other Messages on her 80th Birthday. Compiled by Janet Wilson and Rod Edmond. Produced in association with The New Zealand Studies Network (UK & Ireland), University of Northampton. 14.02.2014, pp. 62-63.