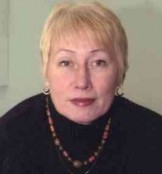 Thus reads the translation of one of Galina Gorelova’s favorite haiku. The Japanese poetic form inspired her desire, already present at age 13, to express herself in music using her own stylistic ideas. Condensed, short, expressive as a haiku—for Gorelova the quintessence of an idea, her credo regarding music.

Her father, by profession an economist, and her mother, a construction engineer, were both music-lovers, and Galina Gorelova and her two sisters grew up in a musical environment. She began piano lessons at an early age – it was assumed as a matter of course that the child would learn to play an instrument. Encouraged by her father, who taught her the alphabet and spent much time reading to her, Galina Gorelova was able to read by the time she was five. To be sure, this led to her later habit, strongly disapproved by her parents, of reading under the bed-covers till late at night.

Her love for literature left its mark in the numerous chamber musical song-cycles in which she set to music poems from various epochs and languages. Similarly, the titles of many of her instrumental chamber pieces are quotations from poetry. Gorelova’s belief in the inexhaustible richness of lyrical themes is reflected in her compositions.

Galina Gorelova began her studies of composition in 1972 at the conservatory in Minsk with Professor Dimitry Smolsky, together with Ljudmilla Shleg and Larisa Muraschka. The three represented the first generation of women in Belarus to study composition after some 30 years of exclusively male students. And they remained the exception; after their generation it wasn’t till the mid-1990’s that women once again began to study composition at the Minsk Academy of Music.

Galina Gorelova completed her studies in 1979 with recognition as the top graduate and was sent to teach at a secondary school for music in Boranovichi. At the same time she took on the position of assistant to Prof. Anatol Bogatyrev at the Conservatory (later the state Academy of Music) in Minsk.

At the beginning of the 1980’s Gorelova gave birth to a son. She did not marry, and it was only with the help of her family that she was able to continue earning a living and thereby secure her existence as a single mother. Between 1983 and 1990 she completed master courses with Juri Fortunatov in Moscow, taught at what is now the state Academy of Music in Minsk and composed many vocal and instrumental works.

Considered an important exponent of Neo-Romanticism in Belarussian music, Galina Gorelova founded in 1990, together with colleagues, the “Belarus Society for Modern Music.” During the last two decades the carillon has played a particularly important role in her music: the bell-sound as medium of connection between past and present. While the sound of church-bells was a part of the early acoustic landscape of White Russia, they were completely silent during the Soviet era, only to resound once again beginning in the early 1990’s. Gorelova also views the sound of bells more personally, as a source of positive energy with healing effects: it soothes the pain of her frequent migraines.

Since 1980 Galina Gorelova has taught composition, orchestra history and counterpoint at the Conservatory (now the state Academy of Music) in Minsk. Her own music is influenced by images from nature and the visual arts, as well as poetic sources, and many compositions are named after paintings.

Gorelova’s music expresses the spiritual life of woman, her life and love. But commissioned compositions for radio, television and stage productions have also become a part of her work. In 1992 she was awarded the Belarus State Prize for her Anno mundi ardentis (In the Year of the Burning World). The title is taken from a poem by Maximilian Woloschin. In this cantata she treats the idea of resistance against war and preservation of peace. The text is based on poems of Aragon, Apollinaire und Arseni Tarkovsky. In 2001 Gorelova was honored with the Prize of the President of Belarus for her “Concerto” for two trumpets (1998).

Because of her many achievements and both national and international renown Galina Gorelova was promoted to the position of professor in 2005.