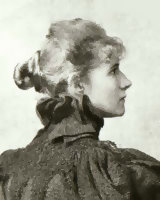 “Possessions and assets had been stolen from us, but not the work achieved in the struggle for freedom, justice and peace,” Lida Gustava Heymann wrote in her memoir, composed in 1941 while in exile in Zurich. A vocal and dedicated opponent of the Nazi regime and a committed pacifist, she had escaped the political terror in Germany by not returning after a trip abroad with Anita Augspurg in 1933.

She and Augspurg were united in a partnership in work and life spanning 40 years. The two were the most prominent figures in the radical wing of the bourgeois women’s movement, which was uncompromising in its demand for women’s suffrage.

Lida G. Heymann used her considerable inheritance for social work, with the aim of helping women liberate themselves from male domination. She set up what today would be considered a kind of feminist women’s center. It offered a hot lunch for working women as well as programs and events; there were daycare centers for children and a counseling center. She founded a coeducational, modern-language high school (Reformgymnasium) for girls and boys as well as professional associations – for women sales employees and for young female stage performers.

Her confrontation with the Hamburg vice squad caused a stir: She protested the degrading treatment of prostitutes and demanded the abolition of state regulation of prostitution – activities which earned her the epithet “crazy woman.”

Lida G. Heymann was co-founder of the women’s suffrage association Verein für Frauenstimmrecht and, together with Anita Augspurg, published the journal Die Frau im Staat. Like the autonomous women’s movement of today, the pair kept a skeptical distance to the established, male-dominated political parties. We no longer share their optimism that equal political rights would also give women equal status.
(German text from 1992; transl. Julie Niederhauser 2020)

Dr. Alice Hamilton had recounted that in their favourite sport of country bicycling, Lida Gustava Heymann had declared that if they had to choose between running over a man or a dog, they wouldn't hesitate to run over the man. Emily Balch said: “I try to be as candid as I can in this complicated world, but when Lida Gustava Heymann got up and said she was going to be »aufrichtig« it was devastating.
(Randall, Mercedes M. 1964. Improper Bostonian: Emily Greene Balch, Nobel Peace Laureate, 1946. New York. Twayne. S 441f)

A Europe with women’s suffrage would not have fallen victim to a World War.

Even as a very young person… I was outraged by the hubris and vain arrogance of men. Their chivalrous as well as contemptuous way of treating women – particularly their wives – both disgusted me. As an adult, aware of myself, I swore never to let men impinge upon my personal freedom; i.e., as far as this is possible under the prevailing conditions in the male state (Männerstaat). I have kept my vow; I could do so without great difficulty, as after my father’s death I was completely financially independent.