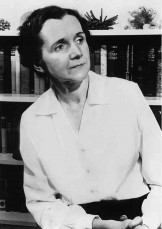 U.S. writer, marine biologist and ecologist, "mother of the environmental movement"
115th birthday on May 27, 2022

“The power of her knowledge and the beauty of her language made her one of the most influential women of our time,” wrote the New York Times when Rachel Carson died of cancer in 1964, a year and a half after her revolutionary book Silent Spring was published.

Rachel Carson grew up on a farm in Pennsylvania. She wanted to be a writer at the age of ten, but later studied biology. In the midst of the Depression, her father and sister died in the course of a year. Carson gave up further professional training to earn money for herself, her mother and her two motherless nieces. For 14 years she worked for the government Fish and Wildlife Service, most recently as editor-in-chief of its publications program. 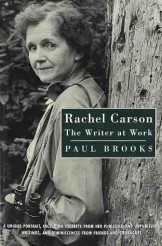 In 1951, Carson published The Sea Around Us, which remained on the New York Times bestseller list for almost two years without interruption and was translated into more than 30 languages. Now she could devote herself full time to writing. One of her nieces died, and Rachel adopted her infant son. Carson's mother was dying, and she herself was constantly ill - but despite the responsibility for others and her own heavy burdens, she undertook to stand up single-handedly against the chemical industry in the United States, and ultimately the entire world. She received full support from her publisher and, above all, from her friend Dorothy Freeman, with whom she shared a deep love during the last ten years of her life.

In the 1950s, vast quantities of DDT and even more dangerous pesticides were sprayed over farmland in the USA, because it was believed that this would finally eradicate the insect plagues that often destroyed harvests. The fact that this destroyed the ecological balance was not acknowledged, even at the highest levels. The chemical industry was overpowering. Carson now became the collection point for all the information that proved that the pesticides were not only killing the insects, but also the birds that lived on them, the ecological balance and thus ultimately our livelihoods. All common thinking today, but revolutionary at the time. 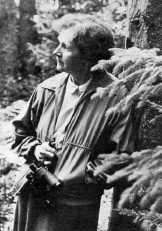 Carson knew that her indictment had to be completely watertight, so she worked on it, already marked by serious illness, to the point of complete exhaustion.

The book appeared in 1962 - it was a sensation. It fundamentally changed the agricultural and environmental policies of the U.S. government and the way we all think to this day.