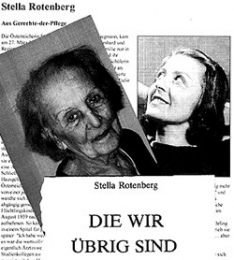 Her work is shaped by her exile experiences, as well as by the murder of a large part of her family. And it makes clear that it is possible to write poetry even after Auschwitz.

Born Stella Siegmann, she grew up in Vienna with her older brother in an assimilated Jewish family in a sheltered atmosphere. She attended a humanist high school, where she learned French and ancient languages, and became involved in the Association of Socialist Middle School Students.

She was 18 when, in 1934, the civil war in Austria put an end to hopes of democratic development. She had to witness that suspects could be sent to camps without trial. Freedom was no longer a matter of course for her as a result, and she became an insecure person.

On a trip through Europe with her brother and a friend in the summer of 1934, which took her to Italy, where she had already met refugees from Germany, France, Belgium and the Netherlands, she became aware of the anti-Semitism that was growing stronger.

She wanted to become a doctor, but was only able to study for two years, until in 1938, as a Jew, she had to abandon her studies after the “Anschluss”. Her parents' apartment was expropriated, her mother mistreated, her uncle severely beaten. Her brother managed to escape to Stockholm, where he remained for the rest of his life.

Stella Siegmann applied for a visa in both the Netherlands and Great Britain, the one from the Netherlands came first and so she went to Leiden into exile in 1939. She was to work there as a domestic helper for a man who probably expected more from her and regarded her literally as a “girl for everything”. Through the Refugee Committee in The Hague, she managed to get a job as an unpaid helper in an orphanage. Because of the change of job, she was monitored by the police, to whom she had to report daily and who even took her all the way to the ship when she finally received a British visa in August 1939. She did not know English, but learned it quickly.

In Britain, she first worked as a nurse in a hospital for the mentally ill in Colchester in Essex, where, in her own words, she had to work harder than ever before or since in her life.

When refugees were partially interned after the outbreak of war, she was considered a “friendly alien,” which meant that she was hardly restricted in her daily life.

In October 1939, she married the physician Wolf Rosenberg, a former fellow student from Vienna who had also fled to Great Britain in the meantime. The latter had joined the British army as a volunteer immediately after his arrival. Stella Rotenberg was therefore considered a soldier's wife, which on the one hand meant that she was accepted, but on the other hand meant that she had to move again and again, depending on where her husband was stationed at the time. Among other places, she lived in Somerset, where she worked for a doctor for pocket money, and later in Darlington, which was spared from heavy air raids during the war. There she worked first as a saleswoman in a pharmacy, later as a bookkeeper.

In 1946 she obtained British citizenship and in 1948 moved to Leeds with her husband, who had a degree in medicine, where they lived in a small apartment provided by the hospital where he was doing his clinical internship. In 1951, their son Adrian was born there.

Only after the war did she learn that her parents and other family members had been murdered by the Nazis.

A return to Austria was out of the question for her after 1945, as she perceived the anti-Semitism that she had known there since her childhood as an unmistakable fact. But England could not become a home for her either, since German was not spoken there. She could not separate herself from her language. As she writes in the poem “Ohne Heimat” in the volume Scherben sind endlicher Ort: “We have no homeland”.

It was not until she was in exile, starting around 1940, that Stella Rotenberg wrote her first poems, which were not intended for publication at first. In her family, she spoke only English with her husband and child, but she wrote her poems in German, as Beate Schmeichel-Falkenberg writes, “(...) writing in this language in the awareness that it is the language of her parents' murderers, a language she loves, fears for, and yet does not want to lose at any cost in the foreign environment.“She describes Rotenberg's tone as a clear, unadorned, concise, unambiguous linguistic style and finds that “writing poetry after Auschwitz about Auschwitz, and doing so in immaculate, perfectly formed, clear German” succeeds for her.  For Rotenberg, writing poetry was an indispensable necessity; she understood writing as an act of resistance.

Until about 1970, she wrote only for herself, and only since the 1980s has she written prose as well as poetry. She lived in the English provinces and had no contact with other exiles (except her husband), exile organizations or literary associations. When she became seriously ill in 1971, she wanted her poems published in the event of her death. Just one year later, a first volume of fifty poems was published with the simple title Poems in Israel. This book was also reviewed in Germany, which brought the poet to the attention of the Berlin writer Ingeborg Drewitz. Through her mediation, Stella Rotenberg, who until then had refused any contact with Austria and Germany, was able to publish a first volume of poetry in 1978 at the Bläschke Verlag in Darmstadt, which, however, had to cease operations shortly thereafter.

Poems by Stella Rotenberg have since appeared in German and German-language American and Israeli publications. She has also published several volumes of poetry and prose.

In her prose she recounts, among other things, her mother's childhood stories, often dealing with abandonment and homelessness, they are observations of a child. But she also wrote texts related to Britain, such as one about women's suffrage and one about Elizabeth Garrett, Britain's first woman doctor.

Her poem “Visiting Germany after 1945,” from the volume Scherben sind endlicher Hort, states:

To whom do I speak?
Whom do I trustingly follow into the house?
Which one killed my mother?
They all look like human beings.

It was not until 1990 that Stella Rotenberg presented her works to the public, first at a symposium in Scotland, later in Germany and Austria; her contacts with the Theodor Kramer Society in Vienna were essential for this, as well as for further publications.
(Text from 2021)
Translated with www.DeepL.com/Translator (free version)

AWARDS:
1996: Austrian Cross of Honor for Science and Art, I. Class.

Links and detailed literature references can be found on the German Rotenberg page (click top right).