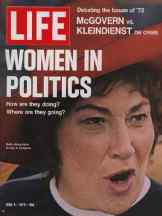 “I am a very serious woman.” So Bella Savitzky Abzug responded simply and practically to the various characterizations and caricatures made of her. Bella’s forthright, forceful manner and flamboyant appearance may often have inspired controversy and criticism in the American political arena, yet this very serious woman spent her lifetime dedicated to public service and activism on behalf of the oppressed and ignored. She gained fame nationally as the first Jewish woman elected to the US Congress and later internationally as a leader in the global women’s movement, where she made a lasting impression among younger activists for her “courage and dominating spirit to speak out for women and be heard” (quote by Vanita Nayar Mukhertee in Lizarde, Remembering Bella).

Bella Savitzky, the daughter of Russian Jewish immigrants, grew up in the Bronx (NYC), where her father owned the Live and Let Live Meat Market. By the age of 11 she had already decided to become a lawyer; she first practiced her public speaking skills in the subway while she collected money for Zionist causes. After attending Hunter College in New York, Bella graduated from Columbia University Law School in 1947, where she was editor of the Columbia Law Review. Having specialized in labor law in school, Bella focused in her private practice on leftist issues: union workers, civil rights, and labor and civil liberties law. During the McCarthy era in the 1950s, she represented clients accused of Communist activities. In one of her most controversial cases, Bella faced threats from white supremacist groups while defending Willie McGee, a Southern black man accused of raping a white woman. During the 1960s Bella began to mobilize people in opposition to the Vietnam war and nuclear testing; she was a co-founder of the Women’s Strike For Peace, and led groups to Washington to lobby for peace.

Convinced that she could effect more change working within Washington, Bella ran for Congress on a platform of peace and women’s rights, with the campaign slogan “This woman’s place is in the House—the House of Representatives.” As the first Jewish woman in Congress (and one of only 9 women in a House of 435 members) she served from 1970-76. While in the House, Bella earned a reputation for uncompromising convictions, outspoken political and personal opinions, and skillful use of the parliamentary system. She was known as a powerful, motivating speaker, who often delivered stirring extemporaneous speeches. Bella’s most ardent wish, to be appointed to the Armed Services Committee so that she could work to limit the influence of the military-industrial complex, was denied; this disappointment didn’t stop her, however, from pushing forward her agenda for peace and popular empowerment. From her first day on the job, Bella ceaselessly lobbied for the end of the draft and of the war in Vietnam, and she also took an interest in veterans’ needs. Bella fought hard in Congress for women’s rights, minority rights, the rights of gays and lesbians; she tried to secure funding for childcare, affordable housing, and healthcare. She was one of the founding members of the National Women’s Political Caucus in 1971.

While she earned her admirers, Bella also left many others, both liberal and conservative, feeling uncomfortable and hostile, for she quickly and loudly voiced her disgust with the “old-boy network” that operated throughout the national political system. She was especially harsh in her open criticism of “so-called” liberals who compromised, capitulated and exchanged favors rather than serve the interests of their constituencies. Consequently, her colleagues and foes in turn made Bella’s style, appearance, and personality objects of discussion or contempt, and the media often reported sensationally about Bella and her activities. Her trademark wide-brimmed hats, her loud, forceful voice and frank speech elicited frequent humorous and disparaging remarks. As politician and friend Geraldine Ferraro remarked at Bella’s memorial service, “Let’s be honest about it: she did not knock politely on the door. She took the hinges off it.”

Bella was also known for her serious work ethic; she was a whirlwind of activity, sacrificing sleep and health in her determination to serve her constituents and America well. She complained that her rigorous schedule caused her to become lonely and isolated from her friends. During this exhausting time in Congress, Bella was sustained by her biggest supporter and admirer, her husband. Bella had married Martin Abzug, novelist and stockbroker, in 1944. After Martin’s death in 1986, Bella confessed that “I haven’t been entirely the same since.” Their two daughters, Eve and Liz, were also a constant presence and support in Bella’s busy life.

In 1976, Bella left the House to run for the Senate, but lost. Subsequent campaigns, for mayor of NYC and again for Congress, were also unsuccessful. Bella returned to private law practice, but still remained a visible and vocal activist on the national and international levels. President Jimmy Carter appointed her co-chairwoman of the National Advisory Committee on Women, though he dismissed her when she objected to federal budget cuts that hurt women; many other members of the committee resigned in solidarity with her. Though battling breast cancer and general ill-health during the 1990s, Bella became increasingly instrumental in the global women’s and environmental movements. She was co-founder and president of the Women’s Environment and Development Organization, an advocacy group that worked with international organizations. First as chair of the NYC Commission on the Status of Women, and subsequently in the First World Conference on Breast Cancer, Bella oversaw hearings on the link between breast cancer and the environment. She served as special adviser to the Secretary-General of the United Nations Conference on Environment and Development, and in 1991 she organized the Women’s Congress for a Healthy Planet as part of the UN sponsored Earth Summit in Brazil. Only 2 nights after an address at the UN, in March 1998, Bella died of complications following heart surgery. Longtime friend and colleague Mim Kelber summed up Bella’s wide-ranging activism: “She was honored for her championship of the world’s women, human rights, the poor and oppressed, and most of all for her people-nurturing vision of a healthy, peaceful planet.”

“I’ve been described as a tough and noisy woman, a prizefighter, a man-hater, you name it. They call me Battling Bella, Mother Courage and a Jewish mother with more complaints than Portnoy. There are those who say I’m impatient, impetuous, uppity, rude, profane, brash and overbearing. Whether I’m any of these things or all of them, you can decide for yourself. But whatever I am—and this ought to be made very clear at the outset—I am a very serious woman.” (Bella! p. 3)

“I am an activist. I’m the kind of person who does things at the same time that I’m working to create a feeling that something can be done. And I don’t intend to disappear in Congress as many of my predecessors have. My role, as I see it, is among the people, and I am going to be outside organizing them at the same time that I’m inside fighting for them. (Bella! P. 5)

“Some guys would like to dismiss me with silly comments about my hats or my four-letter words or my figure. Maybe they think that by dwelling on aspects of my flamboyant character (Norman Mailer has said my voice “could have boiled the fat off a taxicab driver’s neck. It was as full of the vibrations of power as those machines which rout out grooves in wood.”), they can divert attention from the things I really dwell on such as child care, repeal of the draft and an end to the war. All I say is that anybody who thinks he can take me lightly because I’m fresh and colorful had better watch out.” (Bella! p 49)

“Women have been trained to speak softly and carry a lipstick. Those days are over.”