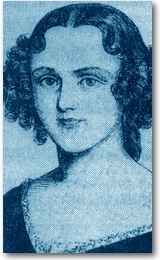 The youngest daughter of a Konsistorialrat (consistorial councilor) receives a private education and, barely 17 years old, is forced into marriage with the English factory owner Samuel Aston:

Despair spoke the wedding blessing,
Spoke her curse at the altar!

The marriage, which she elaborates in the novel Aus dem Leben einer Frau (1847), is divorced twice, finally in 1844. 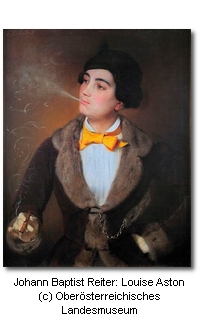 Aston settles in Berlin with the only surviving of her three daughters and strives for a literary career. She associates with Young Hegelians and is soon notorious as a pants-wearing “man-woman.” Anonymous letters prompt a police interview in which Aston confesses that “she does not believe in God and smokes cigars. She intended to emancipate women and should it cost her lifeblood. She thinks marriage an immoral institution [...]”

Even before her first book of poems, Wilde Rosen (1846), was published, she was banished from Berlin. Soon after, she publishes Meine Emanzipation, Verweisung und Rechtfertigung, in which she radically formulates the principle of equality and a woman's right to the free development of her personality. Apparently, she loses custody of her daughter because of her lifestyle.

However, she remains “a struggling child of the struggling times.” In the revolutionary year of 1848, she returns to Berlin and experiences the March Revolution there. She joins the Freischaren and takes part in the Schleswig-Holstein campaign as a nurse. While there, she meets her second husband, Daniel Eduard Meier, MD.

Aston publishes a second novel, Lydia, and edits seven issues of the journal Der Freischärler before she is forced to leave Berlin again as a radical democrat. After several expulsions she is temporarily tolerated in Bremen, where she writes the novel Revolution und Contrerevolution (1849).  Freischärlerreminiszen of 1850 is her last publication. 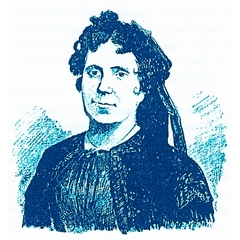 Even before the marriage in November of the same year, Meier encounters his first professional difficulties, for Aston was considered an “active tool of propaganda.” After Meier's dismissal in 1855, a 20-year wandering began for the couple. The first stop was Russia during the Crimean War, the last Wangen im Allgäu, where Louise Aston-Meier died soon after arriving in 1871.

(Text from 1995, translated in 2021 with www.DeepL.com/Translator (free version), edited by Luise F. Pusch)

I claim the right to be blessed in 'my way', to communicate with the universe in my way, a right which women are entitled to as well as men.

Yes, in fresh floods of life
I will cool the blazing soul's embers!
I will be preserved from sin and cross,
Strong in my own spirit's strife,
From bonds and fetters I will swing
Up to enthusiastic Ascension!