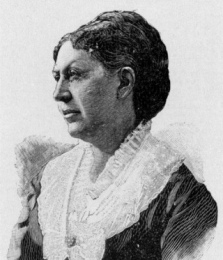 She was lucky, her family was well-to-do, her mother a writer and her father a high-ranking military man.

From the age of six, Marie received piano lessons from Frédéric Chopin and also lessons in singing and composition. There, too, big names were involved, for her composition teacher was none other than Friedrich von Flotow; and she took singing lessons from Laure Cynthie Damoreau, Rossini's and Auber's prima donna.

Soon Clémence, as she preferred to be called, appeared in public with her own compositions, and gained the attention of the young Saint-Saëns with a performance of her song La Source (The Source). It was not so much her singing voice that captivated him, but rather her “calm, flowing, pure playing without unnecessary nuances [...] which she had probably learned from Chopin.”

She quickly established herself on the Parisian music scene, and both her interpretation and compositions were highly praised.

Clémence de Grandval - Valse Mélancolique - Loving Duo
No data is submitted to YouTube unless you playback this video. By clicking on the play-button you give your consent for YouTube to set cookies on the device you are using. Further information about cookie-usage by Youtube can be found here.

Since the young woman had not completed any musical studies, she was considered an amateur in every respect. Yet many a colleague praised precisely her “compositional style unspoiled by scholastic pedantry.” Hector Berlioz not only praised her in the highest tones, but also supported accruing premieres. A memorable concert must have been the one on February 25, 1851, when Berlioz conducted the orchestra of the Grande société philharmonique de Paris. The program included new compositions by Clémence, the first four parts of his own Symphonie dramatique, Roméo et Juliette, and several arias sung by Pauline Viardot.

Also in 1851, Clémence married. The chosen one was Charles Grégoire Amedée Amable Enlard Vicomte de Grandval, with whom she had two daughters in the next few years. Despite her already considerable success, she took up composition studies with Camille Saint-Saëns and in the following years, now under her married name Clémence de Grandval, became one of the most successful composers in France. She also runs a salon, which will always be reported on in the relevant magazines and journals.

Although her very varied and extensive oeuvre encompasses almost all instrumentations, between 1860 and 1892 she is celebrated primarily for her stage works, and from the 1890s onwards her song output also came to the fore. For her oratorio La Fille de Jaïre she finally received the Prix Rossini in 1879, which had just been newly established by the Académie des Beaux-Arts.

Probably her greatest success, with the highest number of performances over the years, was the Stabat mater of 1871.

Clemence de Grandval Stabat Mater Juxta Crucem
No data is submitted to YouTube unless you playback this video. By clicking on the play-button you give your consent for YouTube to set cookies on the device you are using. Further information about cookie-usage by Youtube can be found here.

From this year on, Clémence de Grandval was also intensively involved in the newly founded Société nationale de musique as a composer, singer and pianist, and four years later was admitted to the Société des Compositeurs. It was during this period that she wrote her five-movement Suite for Flute and Piano, the premiere of which was played by Paul Taffanel, to whom the work is dedicated. Taffanel was one of the most famous flutists in France at the time. What a pity that nothing is known about the genesis of the work.

A large number of works are also dedicated to her herself, indicating that she encouraged young composers. Unfortunately, the state of research on her life and work is very poor, as is the case with many formerly famous women composers. Clémence, however, is one of the few who is at least listed in Joseph-François Fétis' Biographie universelle des musiciens.

In 1892, her last opera Mazeppa was published, followed by several songs and mélodies.

The artist remained present in French musical life, but slowly withdrew from the concert podium. In November 1907, Marie Clémence de Grandval died in Paris a few days before her 77th or 79th birthday.