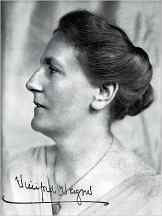 The feisty widow of Richard Wagner's son and heir Siegfried directed the Bayreuth Festival during the “Third Reich” and became notorious in postwar Germany for her longtime friendship with Hitler, a friendship she never later denied or regretted. But although she remained loyal to Hitler the man and to the völkisch “ideas” of his movement throughout her life, she repeatedly used her great influence to help victims of Nazi persecution, often with success – and ultimately with the result that Hitler withdrew his favor from her in 1940. After the war, the former ” Mistress of Wahnfried ” was relieved of her post as festival director and for a long time – as a kind of scapegoat for the entire Wagner clan – was considered the only Nazi in the family. It was not until 2002 that Brigitte Hamann's book brought to light the extent to which other family members, especially Siegfried and his son Wieland, had also been infected by antisemitism and National Socialism.

Winifred Marjorie Williams was the daughter of John Williams, an English writer and theater critic, and actress and painter Emily Florence (Karop) Williams. Both parents died very young, and Winifred went first to live with relatives and then to an orphanage. At the age of nine, she was brought to Berlin for convalescence by a 70-year-old distant relative, Henriette (Karop) Klindworth, and her husband Karl Klindworth (77), a pianist and former master student of Franz Liszt, and adopted a year later. Klindworth, an admirer of Richard and Cosima Wagner, gave the girl piano lessons and a basic musical education and introduced her to Wagner's works. The young girl was particularly taken with Senta, a character from Der fliegende Holländer who falls in love with the image of a strange man and sacrifices herself to redeem him (Hamann 12).

At 17, she met Siegfried Wagner in Bayreuth, the only son of Cosima Wagner and “the master,” who had succeeded his mother as festival director. The aging Cosima was anxious to find a wife for her bisexual son in order to secure the family legacy and inheritance and avoid public scandal. The young, tall Winifred was impressed by the composer, who was 28 years her senior, and married him a year later, on September 22, 1915. The first years in the Wahnfried household were difficult for the young woman, and not only because of the privations of wartime and the post-war period: the household was dominated not only by mistress Cosima, but also by her two daughters Daniela Thode and Eva Chamberlain, the latter being the wife of the anti-Semitic race theorist Houston Stewart Chamberlain. Nevertheless, Winifred proved energetic and loyal, managing Siegfried's daily work and taking over his correspondence while he tried to earn money for the growing family on concert tours. Between 1917 and 1920 Winifred gave birth to four children: Wieland, Friedelind, Wolfgang and Verena. Winifred stood by her husband, the son of the “master” after all, and concealed his homosexual affairs for life, even from her children.

Winifred Wagner und die Geschichte des Hauses Wahnfried 1975 Hans Jürgen Syberberg
No data is submitted to YouTube unless you playback this video. By clicking on the play-button you give your consent for YouTube to set cookies on the device you are using. Further information about cookie-usage by Youtube can be found here.

Like everyone in the Wahnfried household, Winifred Wagner was an enthusiastic supporter of the anti-Semitic völkisch movement, which hated the leftist Weimar government and yearned for a “renewal” of German greatness after the humiliations of the Treaty of Versailles. Although they rejected the style and tactics of the early National Socialists, the Wagners, like many “good” citizens of Bayreuth (and Germany), were enthusiastic about Hitler as a possible savior of the nation. Hitler, in turn, depended on the support of reputable and prestigious families like the Wagners to make his movement “respectable” and to raise money. At Winifred's invitation and to mutual enthusiasm, the Wagner admirer Hitler visited Haus Wahnfried and Wagner's grave for the first time in 1923. Soon after, during the failed putsch in November, Siegfried and Winifred, who were in Munich for a planned concert, experienced the turbulent crowds around the Feldherrnhalle. Winifred was electrified: “November 9 opened up a completely new field of activity for me, namely the passionate advocacy of Hitler and his ideas,” she wrote to her friend Lene Roesener (quoted in Hamann 91)

During his imprisonment in Landsberg, Hitler regularly received food parcels from Winifred and also paper for the manuscript of Mein Kampf. From Landsberg, he thanked the Wagners in a letter to Siegfried, saying that the election success of May 1924 was “primarily due to you and your wife,” since “you, Herr Wagner, and especially your so revered wife ... have given your name to the völkisch movement.” (quoted in Hamann 119-20) In 1925, Hitler attended the Bayreuth Festival for the first time, which Siegfried had reopened a year earlier, and a close friendship began between “Winnie” and “Wolf,” who had moved quickly to a first-name basis. At first, attempts were made to keep Hitler's relationship with Haus Wahnfried a secret, so as not to alienate festival-goers and supporters (especially Jewish ones) who were repulsed by National Socialism and thus affect ticket sales. Winifred, who had been the first woman in Bayreuth to obtain a driver's license, often drove the esteemed guest from his hotel to the family's fireside at night without being recognized. With the children, especially to the firstborn Wieland, “Uncle Wolf” had a cordial relationship that even outlasted his friendship with Winifred. 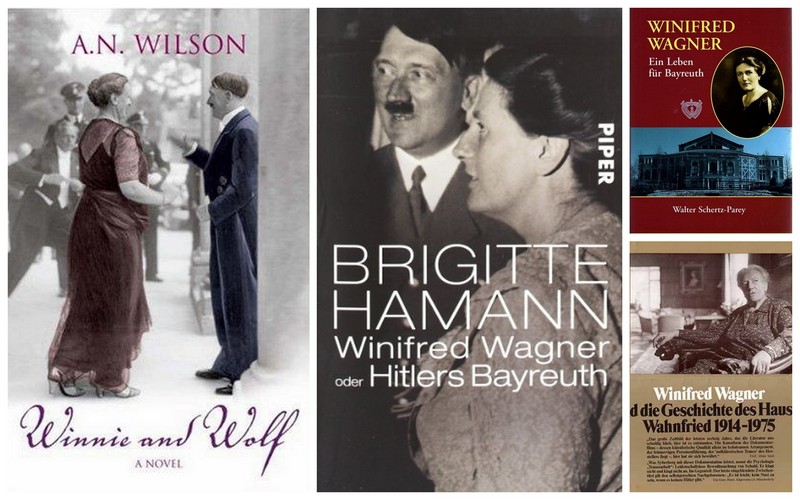 In 1930, both Cosima and Siegfried died, and Winifred, at the age of 33, took over the direction of the Festival in accordance with her husband's will. She did so with typical energy and determination, as her confidante and assistant Lieselotte Schmidt wrote: “All invitations and negotiations about participation, from the soloists to the last ballet student, everything emanates from Frau Wini . . without her, absolutely nothing happens” (quoted in Hamann 191). Winifred strove for a fundamental improvement in the quality and modernization of the festival and brought the renowned director and artistic director Heinz Tietjen from Berlin to Bayreuth as artistic director, along with conductors such as Toscanini and Furtwängler and the stage designer Emil Preetorius. Soon “the boss” fell in love with the urbane Tietjen, 16 years her senior, and hoped for a marriage which however never came to pass.

When Hitler came to power, he became a powerful protector and financial supporter of Winifred and the Festival, for he saw Wagner's Bayreuth as a cult shrine of National Socialist values and Germanic culture. Winifred used her status as a favorite to assert her free decision-making power as director of the Festival against Nazi officials and tradition-bound old Wagnerians alike. She successfully refused to join the Reichstheaterkammer, which was mandatory for theater directors, and was able to keep racially or politically disapproved and vulnerable employees at the Festival for a long time. Moreover, she also tirelessly and repeatedly stood up for people who felt unjustly treated by the government. “She raised heaven and hell to get me out [of confinement],” said one grateful beneficiary. Winifred: “Wherever I can prevent an act of violence by the Party, my passionate resistance will begin, and wherever I can help a decent person, I will do it for the sake of my conscience” (quoted in Hamann 266).

After the war, she was summoned to a Spruchkammer (a civilian court handling denazification) and was forbidden, among other things, to continue directing the festival. She handed over this task to her two sons. The daughters never came into consideration for her as directors, although Siegfried had appointed all four children as equals in his will.

Hitler in Bayreuth
No data is submitted to YouTube unless you playback this video. By clicking on the play-button you give your consent for YouTube to set cookies on the device you are using. Further information about cookie-usage by Youtube can be found here.

In old age, Winifred's views of the past solidified: “For me, the time from 33-39 still remains the best!!!!!!” (quoted in Hamann 605). She still caused scandal by speaking her mind freely, as in Hans Jürgen Syberberg's 1975 film Winifred Wagner und die Geschichte des Hauses Wahnfried 1914-75. However, according to Winifred, Syberberg recorded parts of the interview that she had intended to be purely private: “That scoundrel, however, let the tape run in the meantime without my knowledge and without a second thought also revealed these parts to the public” (quoted in Hamann 624).