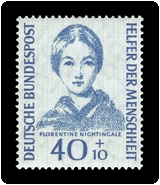 British social reformer, statistician and pioneer of nursing profession
200th birthday on 12 May 2020

Florence Nightingale, the legendary „Lady of the Lamp,” gained initial fame for ministering to British soldiers during the Crimean War, and later for leading the professionalization of nursing as a career for women. But while her early exploits were romanticized in the media of the time – she had become a national icon by the age of 36 – her achievements in subsequent years extended far beyond the education of nurses. A tireless reformer and talented mathematician with a gift for administrative analysis, Nightingale made major contributions to the fields of statistics, military and public sanitation, and epidemiology in England and British India. Although she herself epitomized the independent-minded woman idealized by modern feminists, Nightingale herself was ambivalent about aims of the women’s movement of her day.

Born into a wealthy but liberal Unitarian family, Florence and her older sister Parthenope received an early education like that usually reserved for boys. Their Cambridge-trained father, William Nightingale, instructed them himself in Latin, Greek, German, French, Italian, mathematics, history and philosophy. The sisters accompanied their mother, Fanny Smith Nightingale on her visits to care for sick villagers, and young Florence absorbed a strong ethos of service. In 1837, moreover, she experienced the first of several what she interpreted to be calls from God urging her to dedicate her life to service to others. She rejected for herself the role expected of an upper-class woman to marry and devote herself to a life in society, and turned down more than one eligible suitor, including poet, man of letters and politician Richard Monckton Milnes..  Nightingale’s early essay Cassandra (1852) offers a brilliant critique of the Victorian ideal of passive and dependent femininity, and has been deemed “a major text of English feminism, a link between Wollstonecraft and Woolf” (Showalter).

Despite her parents’ rejection of her desire to devote her life to service, Nightingale determinedly sought opportunities to learn the skills of nursing. Through travels with her family and friends, she acquainted herself with models of medical care in France and Germany, where religious orders provided training and occupational opportunities for female nurses that were unknown in England. She herself undertook training at the institute for deaconesses at Kaiserswerth. Finally, in 1853, her parents relented, and Nightingale accepted an unpaid post as superintendent of a hospital for “gentlewomen”; she also received an income of 500 pounds annually from her father.

As news of the disastrous plight of sick and wounded British soldiers in the Crimean War caused public outrage on the home front, Nightingale was sent in October 1854 with a contingent of 38 nurses to the hospital barracks at Scutari on the shores of the Bosporus.  Creating order out of chaos, she saw to it that the soldiers received adequate supplies previously withheld by a cumbersome bureaucracy, and successfully fought an obstructionist military medical corps. Nightingale gained an enormous propaganda victory with her work and earned immediate and lasting fame. As recent historians have pointed out, however, the death rate – with many more deaths occurring from disease than from war wounds – was in fact higher in her hospital than in others in the region, and only began to decline after a Commission sent from England six months into her stay flushed out the clogged sewers and created more sanitary conditions.  Once back in England, Nightingale analyzed the mortality statistics and came to the conclusion that proper sanitation was the key to saving lives. This insight would propel her reform efforts in the decades to come.

In 1856 Nightingale had returned to England a sick woman who would be intermittently bedridden for many years. Historians now believe she most likely contracted brucellosis, a highly infectious disease spread by drinking unpasteurized milk or consuming undercooked meat from infected animals. Despite her illness Nightingale continued her work, gathering and analyzing vast amounts of data and utilizing her many connections in high places to effect change. 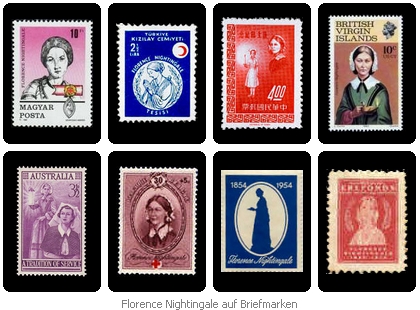 A fund had been established to enable Nightingale to continue her work in training nurses, and in 1860 her School of Nursing was opened in London’s St. Thomas Hospital. The school came to serve as a model for preparing nurses to serve in hospitals nationwide and formed the basis for professionalization of the field. Nightingale’s Notes on Nursing (1859) is still read today. In all, she wrote over 200 books and articles.

Her analyses and advocacy brought improvements in medical care and social conditions in India as well, where she also campaigned against recurring famine and exploitation of farmers.

Nightingale’s reforms drew upon her exceptional knowledge of statistics, a field in which she was a pioneer and which she applied to the science of epidemiology with particular success. She developed a tool known as the polar area diagram, for example, which makes statistical data graphically visible, and used it to document the mortality rates of soldiers in the Crimean War. In 1858 she became the first woman to join the Royal Statistical Society.

Although she originally opposed the training of women as doctors, believing that they would not prove competent, this view softened in her later years, and the last two doctors who attended her at the end of her life were women. Nightingale supported women’s right to vote, but did not believe it would bring much of value. In 1870 she joined other early feminists, however, in opposing the Contagious Diseases Act, a law which penalized prostitutes and held male patrons harmless.