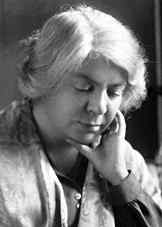 “And the sky promised a good harvest this year, making the almond trees and peach bushes in the valley floor bloom luxuriantly; and this, hemmed in by two white ranges of hills, with the blue-hued mountains far to the west and the shimmering sea to the east, was as if embedded in green and blue veils, beneath which the river murmured its soporific way.” (from: “Canne al vento”, translation 1930)

Such impressive descriptions of nature are typical of the Sardinian writer Grazia Maria Cosima Damiana Deledda. The quotation comes from the novel “Reed in the Wind” (Italian: “Canne al vento”, 1913), the author's favorite novel.

She became famous with stories of human destinies from the interior of Sardinia, more precisely from Nuoro, a small town at the foot of Mount Ortobene and its wild surroundings, the Barbagia. An inhospitable mountainous area, known for its harsh climate, villages difficult to access, proud and stubborn inhabitants.

Grazia Deledda was born in Nuoro on September 27, 1871, the fifth of seven children. Her father was mayor there; a stern and respected merchant who dealt in cork, coal and cheese, lawyer and also poet. The mother - illiterate, like almost all women in Sardinia at that time - took care of the large household. She was withdrawn and seemed silent and almost enigmatic, as it says in the autobiographical novel “Cosima”.

Grazia was an open-minded and talented girl with a good and quick grasp of things, as well as being curious and determined. Even before starting school she could read and write, but she attended school only until the 4th grade; at home only the Sardinian dialect was spoken. Grazia studied Italian, French and Latin privately. She became interested in literature at an early age, reading everything she could get her hands on, from the Bible to Italian novels to the great foreign authors of her time.

She published her first novella, “Sangue Sardo” (“Sardinian Blood”), in a Roman newspaper at the age of 17. In Nuoro this was badly noted, because there they were not used to seeing a female being occupied with anything other than domestic matters. Her relatives were also against writing, because they feared that no man would want to marry a woman who wrote and that she would bring her family and the entire village into disrepute.

These hostilities caused Grazia to write in secret for a long time. In addition to financial prosperity, she also experienced several dramatic and tragic events in her family: one brother gave up his medical studies because of alcoholism, another brother became a criminal, her father died of a heart attack in 1892, and four years later her sister Vincenza also died.

Although there was a lively cultural life in Nuoro at the turn of the century, and illustrious men came and went at the Café Tettamanzi, life - especially for women - took place far from the world. The monotonous daily routine was only livened up by the folk festivals and carnivals, where people danced and sang.

In 1899, Grazia Deledda moved to the Sardinian capital of Cagliari; she hoped to find a better literary environment there. Under the mayor of the time, Cagliari was developing into a fashionable town during the Belle Époque; there was a lot of building going on, and an open and lively climate. Grazia was a guest of Maria Manca, the editor of the magazine “La donna sarda” and there she met her future husband Palmiro Madesani, an Italian financial official, whom she married in 1900.

With him she moved to Rome, where she remained until her death. She divided her life between family duties - she gave birth to two sons, Franz and Sardus - and writing. Her husband supported and encouraged her in her work and became her most important collaborator. She took little or no part in the political, social and literary struggles of her time. Her discovery was Sardinia. She wanted to make her beloved Sardinia known all over the world. And not by recounting historical events, but by meticulously describing the timeless cosmos of seasonal changes, the things that move people in their hearts and the objects of daily use.

In 1908 she participated in the first Italian women's congress organized by the educator Maria Montessori. In “Cosima” (1937 posthumously) she describes herself: “Of small stature, with broad head, the tiny hands and feet, she had all the characteristic external features of women of her - perhaps Libyan - race. The profile was somewhat blunt, the dentition strong, the upper lip greatly elongated. But she had white, velvety skin, very beautiful black, slightly wavy hair, and large, almond-shaped eyes of that golden black which sometimes shimmers green, and the large pupil of Hamitic women, which a Latin poet called 'the double pupil,' and whose flash is irresistible.”

“La Deledda”, as she is benevolently called by the islanders who bask in the glow of her success, wrote 350 novellas, 30 stories, 8 fables, 15 sketches, 35 novels and countless letters.

Her most important book is “Canne al vento” (“Reeds in the Wind”) from 1913, repeatedly published by various publishers and translated into many languages. In it, she describes the dreary and hard-working everyday life of an impoverished family in the barren inland of Sardinia; the story of the three sisters Ruth, Noemi and Esther Pintor and the farmhand Efix gives a good insight into the archaic and sensual natural world of the island, animated by magical beings and magical powers.

She is still the only Italian writer and the only Sardinian to receive the Nobel Prize for Literature and the second woman after Selma Lagerlöf (1909). She received the prize in 1926 for “her works inspired by idealism, which depict with vividness and clarity the life on the island of her birth, and which treat with depth and warmth the problems of human life in general”.

Grazia Deledda died of cancer in Rome on August 15, 1936, at the age of 64. She is buried at Monte Ortobene, in a sarcophagus in the “Chiesa della Solitudine” (“Church of Solitude”). Her birthplace in the historical center of Nuoro is located in today's Via Grazia Deledda and is the three-story “Museu deleddiano”. The literary park “Grazia Deledda of Galtellì” invites regularly to walks to the settings of “canne al vento”.
(Translated with www.DeepL.com/Translator (free version); edited by Luise F. Pusch, September 27, 2021)