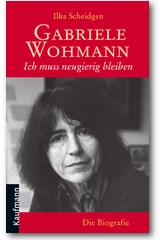 The most important German literature prize, named after Georg Büchner from Darmstadt, has not been awarded to Gabriele Wohmann from Darmstadt. The hope that the German Academy for Language and Poetry would eliminate this embarrassment on Wohmann's 80th birthday in 2012 was not fulfilled.

A biography about Gabriele Wohmann did not appear until 2012 (see Scheidgen below); until then, there were only autobiographical writings, interviews, short biographical outlines in “material books” and the like. The key data are quickly listed: Born in Darmstadt in 1932 as the third of four children in a parish family, happy childhood with loving parents and siblings who together resisted the Nazi madness. After the war, boarding school student on Langeoog, studies in Frankfurt in the early 1950s, then teacher. Freelance writer since 1956. Unusually versatile and extensive oeuvre (“I don't feel well if I don't write”): Short stories, novels, poems, radio plays, television plays, essays, reviews. Numerous honors, including the Hessian Culture Prize (1988) and the Grand Federal Cross of Merit (1997). Lives in Darmstadt's Rosenhöhe Park with her husband Reiner Wohmann, whom she married at 21 and who gave up teaching for her sake and now acts as a househusband and her agent, while she brings in the money through her writing, reading tours and television appearances. 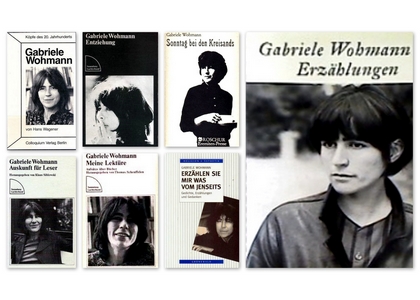 Critics complain that Wohmann repeats herself endlessly with her stories about screwed-up married couples and families, and that her range of topics is too narrow. In fact, she “always stays close to herself,” and since she doesn't do much, but rather depends for her well-being on as little change as possible, her pool of events and characters is limited, but is fully exploited. She deals with larger incisions - in the last 30 years naturally often old age, illness and death of close relatives (father, mother, aunts, sister) - in novels or diaries: Ausflug mit der Mutter (1976), Unterwegs (1986), Bitte nicht sterben (1993) or Abschied von der Schwester (2001). In addition, Wohmann's entire oeuvre is an ongoing commentary on contemporary events. Her best-known novel, Paulinchen war allein zu Haus (1974), is a satire on anti-authoritarian education; Frühherbst in Badenweiler takes the German Autumn as its theme. Der Flötenton (1987) reflects on the Chernobyl catastrophe, and Holt mich einfach ab (2003) on September 11, 2001.

Reich-Ranicki's oft-cited early verdict, “In the field of the short story, there are few writers in the entire German-speaking world who can even equal Gabriele Wohmann,” is perhaps even more applicable to her essays, reviews, and autobiographical writings, for which she was awarded the Johann Heinrich Merck Prize in 1982. Linguistic and intellectual brilliance and observational acuity, wit and (wry) humor combine in her non-fiction with high sensitivity, even vulnerability, and a kind of brittle intimacy, especially when Wohmann writes about people and things she loves: music, literature, food, and the daily television ritual, or fellow writers, relatives, and friends. A unique and moving example is Bitte nicht sterben (1993), about her elderly aunts and their eldest sister, Wohmann's mother. 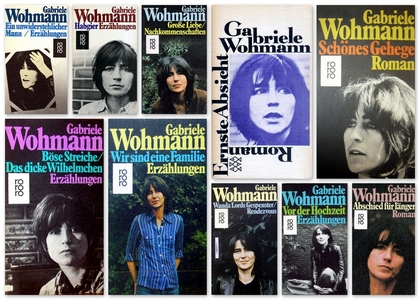 Her short stories, on the other hand, often suffer from the fact that Wohmann doesn't seem to like her protagonists. She probably agrees with her great role model Chekhov, about whom she has written a knowledgeable and sensitive portrait. She admires Chekhov's cool distance; he does not write “for the heart,” but for art.

In her 1982 literary-psychological analysis of Wohmann's female characters, Dagmar Ulbricht concludes that the typical Wohmann antiheroine is narcissistically disturbed, i.e., her self-esteem is dependent on the judgment of others, mostly men. To gain their goodwill, she conforms, disappears behind a mask of friendliness, and denies her self. Inwardly she feels correspondingly empty, is full of resentment.

The other variant of the narcissistic personality/woman is the one who acts to the point of sadism against “the different, the weak, the deviant” - in order to gain or keep the recognition of her group. Thus, according to Ulbricht, Wohmann very precisely hits a general problem of the socially expected behavior of women: Self-denial in order to be loved - and when the reward fails to materialize: Resentment, inner emptiness, and despair. The criticism of the women's movement that Gabriele Wohmann, with her “lousy female characters,” is “totally misogynistic” thus certainly falls short.

A comparison between Wohmann and McCullers is revealing: McCullers portrays her “freaks” accurately, with all their weaknesses, but lovingly. One gets the feeling that McCullers likes her characters. It just makes for more fun reading. In her later work, Wohmann also seems to lean more toward this view. [

If you're doing anything artistic in any way, there's something wrong with you. You have to be a little neurotic, otherwise you would do something else.
(Gabriele Wohmann in an interview 2002)