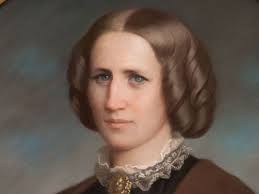 Henriette Breymann was born into a pastor’s family in 1827; she was the eldest of nine children.

There is an odd discrepancy between narratives about Henriette in her youth and as an adult.  Helene Lange described her as self-sacrificing, motherly and publicity-shy; her pupils saw her as genteel, witty and inspiring. By contrast, as a young girl Henriette was reportedly rebellious, mocking, uninterested in learning, restless, a “spoiled prima donna,” and a “risqué figure among the landed gentry of Brunswick (Gertrud Bäumer).

These traits worried her parents, who sought to improve Henriette’s behavior with instruction and strict upbringing and by instilling in her a sense housewifely duty. The turning point in the life of psychologically vulnerable Henriette, who was also physically at risk due to her rapid growth, occurred when, on the farsighted initiative of her mother, she came into the orbit of her great-uncle and founder of the kindergarten movement, Friedrich Froebel. Her erratic behavior subsided and she dedicated herself with perseverance and enthusiasm to training as a kindergarten teacher. In 1854, after a series of personal and professional setbacks and with the support of her family, she founded an educational institution with an attached village kindergarten in her parents’ home in Watzum, near Schöppenstedt in Lower Saxony. The educational home established itself as a prestigious, widely renowned pedagogical training facility for girls. Among those girls were Mary Lyschinska, who would later become her biographer, and Eugenie Schumann, daughter of Clara and Robert Schumann.

Henriette Breymann went on lecture tours throughout Switzerland and advocated for Froebelian educational ideas. Due to a lack of space, Breymann’s institute was relocated to Wolfenbüttel in 1864 and renamed “Neu-Watzum.” In the course of founding an association for education, Henriette Breymann met lawyer and social reformer Karl Schrader, seven years her junior; they married in 1872. She followed him to Berlin when he was offered a senior post in the railway administration. There she continued her association work and founded another Froebel kindergarten. The pinnacle of her work in the German capital was achieved in 1896 with the opening of the Pestalozzi-Froebel-Haus: a model teacher-training institute occupying two large buildings and serving as a center for early-childhood and domestic education. Henriette Schrader-Breymann received support from Crown Princess Victoria, and advised her – the wife of the heir to the Prussian throne and daughter of Britain’s Queen Victoria – on educational and social issues. Henriette Schrader-Breymann joined the women’s movement, facilitating key contacts between it and the crown princess. She died of kidney disease in 1899 in Berlin-Schlachtensee after a prolonged illness. She is buried in Wolfenbüttel.
(Text from 1998; transl. Julie Niederhauser 2021)

I have experienced the entire history of women’s emancipation within myself. Raised as a woman of olden times, created for the woman of the future, I rebelled against tradition and nature until I finally found the solution to the question within myself.
(Henriette Schrader-Breymann, as cited in Lyschinska Vol.1, p. 380)