The question whether Joan the Mad “deserved” this name and was in fact mad has occupied people for almost five centuries. Even today unwanted people can be eliminated by asserting that they are insane, or, as was the case for Joan, that they are unfit to govern. There were three men whose “vital interest” required that Joan be and stay insane or at least be considered so for most of her life. They were the men closest to her: her father, her husband, and her eldest son.

After the death of her mother Queen Isabella of Castile Joan became heiress to a vast empire; middle and south America with their immeasurable treasures had been discovered by Columbus and his men only 12 years earlier. Immediately, her husband, the Habsburg Philip the Handsome, and her father, Ferdinand, did everything possible to wrest her inheritance from her. Her son Charles would also eventually hinder her from ruling over her empire or herself.

According to one tenet of feminist psychology, women in patriarchal society actually have no choice but to become mad. Joan’s story is a case in point: she was expected to tolerate the - from a contemporary and feminist perspective – unbearable, and she protested. In contrast to her mother Isabella, who was generally admired as prudent, Joan did not put up with her husband’s constant philandering; instead she became enraged and fought back. This led to her being labelled as suffering from a delirium of passion and jealousy, and people felt sorry for the poor husband who was married to such an insane fury. And when it seemed politically opportune to declare her unfit to govern, one could easily fall back on this early manifestation of “madness”…

Joan was the third child of the Spanish monarchs Isabella (1451-1504) and Ferdinand (1452-1516), both referred to as “the Catholic.” Information about her childhood is sparse; one could not know that the two older siblings would die so early and that Joan would become heir to the throne at the age of 20.

The first five years of her marriage to Emperor Maximilian’s only son Philip, the Dutch heir to the Habsburg empire, were relatively quiet. Between 1498 and 1501 Joan gave birth to three children, Eleonore, Charles, and Isabel. Charles, the longed-for male heir, would later rule, as Charles V., an empire “in which the sun did not set” – an empire that in fact belonged to his mother, whom he kept imprisoned for nearly 40 years in the fortress Tordesillas.

In her will, Isabella named Joan as her successor. Should Joan “not be willing or able” to govern, then Ferdinand should take over the reign until Joan’s son Charles came of age. Through this provision Joan’s fate was – in effect – already sealed…

Isabella’s death created a power vacuum which irresistibly attracted power-hungry men: first of all Joan’s father Ferdinand, but also husband Philip, and later son Charles. Joan, who was meant to fill the vacuum, had never learned to handle power with confidence, indeed, quite the contrary.

Two years before the death of Isabella, the Cortes (an early form of parliament) of Castile and Aragon had sworn allegiance to Joan and Philip – a situation which Philip intended from the outset to exploit. He had only to isolate his wife and get her out of the way in order to rule Spain without interference. Father Ferdinand on the other hand needed a “crazy” Joan to grab the power. Moreover, the victor would have to eliminate his rival for power. Both men went to work immediately.

Initially, Philip seemed to be in control, but he died quite suddenly, possibly due to an infection. After his death, Spain again experienced a power vacuum, and again, Joan was either not willing or able to fill it. While she withdrew from the world in mourning, her country fell into anarchy.

During the subsequent negotiations Joan transferred governance to her father. “With that… she did not count any more for him,” Miller notes laconically. Joan now had to recognize that her beloved father was also her worst enemy. But as if that were not enough, she was powerless against him, since she had yielded power to him herself: she was trapped.

There are indications that this shock actually did bring her to the edge of madness. For only from this time on do we have records of the self-destructive symptoms which would never leave her. In October 1508, a letter from the bishop of Málaga reports that she ate and slept on the floor and that she did not wash herself or change her clothing.

Ferdinand died early in 1516, seven years after he had imprisoned his daughter. Joan was not informed of his death, because he had given orders to keep it a secret from her. She was 36 years old – in the prime of life as one would say today – and should have been reigning over a world empire consisting of colonies in Africa and America; the death of Ferdinand also made her queen of Aragon, Sicily, and Naples. Two of her three mortal enemies were dead, but that would not help her. The third, the most terrible, her own son, then a boy of almost 16 years, was already poised at the starting gate to take over from the first two tormentors.

In the spring of 1516 the Castilian Cortes swore him the oath of allegiance only under the condition that “should … Joan regain sanity, he should renounce his rule over Castile and everything should become subject to her rule.” This condition, with which the Cortes wanted to protect the autonomy and the rights of Joan, ironically had exactly the opposite effect: ”It was a terrible price to pay for Joan,” Miller writes. “It was her final condemnation to madness. Only as long as Joan was considered mentally disordered could Charles govern, and his intention was to govern for ever.”

Joan had already been confined in Tordesillas for 12 years, but that was only about a third of the sentence that still lay ahead. She would vegetate for another 34 years: silent, dreary, and without meaning – in this way her life stretched on until she died in horrible pain from the complications of a scalding.

Whether Joan was mad or not – one thing can be said with certainty about this unhappy queen: had she been a man, she would not have become mad. She would have inherited the world empire and its vast treasures as a matter of course. She would have been reared for such an office from birth as second in line for the throne. No wife Philippa the Beautiful, no father, no son would have gotten the “mad” idea to contest her inheritance and her reign. 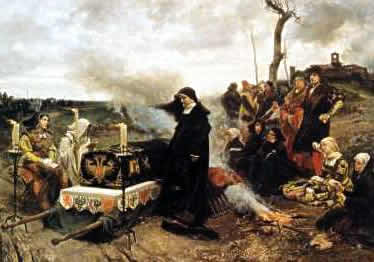 Miller, Townsend. 1967. The Castles and The Crown.

Prescott, William H. 1842. History of the Reign of Ferdinand and Isabella the Catholic of Spain. Philadelphia. Lippincott & Co., 1868.