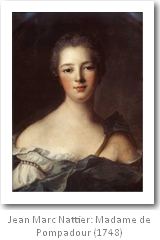 Madame de Pompadour, mistress of Louis XV of France, is synonymous throughout the world with “the” mistress par excellence. It is a irony of history that love games were probably the thing she was least good at - and it was only through them that she was able to get into a position to exercise her many other talents.

Jeanne-Antoinette Poisson came from bourgeois circles of high finance. Her father François, sentenced to death as a stooge of two powerful bankers, had to leave France for many years. Meanwhile, her mother, Louise-Madeleine de La Motte, kept her head above water with the help of a lover: Charles-François Le Normant de Tournehem, who paid for an expensive education for little Jeanne and her brother Abel and may also have been Jeanne's biological father.

The pretty girl was educated at the Ursulines in Poissy and later received private lessons from the most famous artists of the time, including singing and acting. At the age of nine, she had already been prophesied by a fortune teller that she would one day become the king's mistress. As a thank-you to this woman, Madame Pompadour later gave her a pension of 600 livres in her will.

At 19, Jeanne married the young tax tenant Charles-Guillaume Le Normant d'Etiolles, her patron's nephew, and bore two children: Charles, who died early, and Alexandrine in 1744. Never before had a commoner risen to the position of official royal mistress; nevertheless, Madame d'Etiolles tried to arrange to meet Louis XV: her property bordered the sovereign's hunting grounds, where she regularly appeared as soon as he went stalking. A masked ball on the occasion of the marriage of the crown prince, to which non-nobles were also admitted, brought the decision in early 1745. Louis XV and d'Etiolles became lovers. Jeanne left her husband, took their daughter with her, and moved to the palace at Versailles, where she spent the summer studying court etiquette and was ennobled as the Marquise de Pompadour. From the fall of 1745, she was then considered “maîtresse en titre” - a position she would hold until her death, despite all obstacles.

With her unerring taste, Pompadour quickly established herself as a patron of numerous important artists and craftsmen. She bought and built numerous castles, decorated them and sold them again. All this was chalked up to waste by the people. The nobility, in turn, largely cut the once bourgeois social climber. The Marquise reliably succeeded in cheering up the king, who was prone to depression, and she became an indispensable advisor to him, even a kind of prime minister without office as the years went by. Unlike previous mistresses, Jeanne treated Queen Marie, a pious woman marked by numerous pregnancies, with high regard. Because she promoted the encyclopedists around Diderot as well as the mocker Voltaire, Pompadour was opposed by the Catholic clergy - without, of course, being an enemy of the faith.

A woman of many interests, she excelled as a letter writer, played, sang, and danced on a private stage, illustrated and printed bibliophilic works, cultivated new plants, and learned copperplate engraving and gem cutting. The porcelain manufactory of Sèvres owed its decisive support to her, the Parisian Ecole militaire its creation. Nevertheless, the Marquise could never be sure of her position. There was constant scheming against her, and attempts were made to replace her with another woman. After six years together, Louis XV and his consort ended their sexual relationship, as Jeanne was weakened by numerous miscarriages and the hectic court life was undermining her health. But instead of being shunted off to a convent - previously the custom for discarded mistresses - Pompadour remained at court and became more powerful than ever as the king's friend. Young women from the people, who could not become dangerous to her, took over the “service of love” to the sovereign. They lived not far from the castle, in a house called “Deer Park”, and were princely rewarded when they left (often after the birth of a child). It is interesting that the famous favorite was actually intimate with only two men in her lifetime and, according to her own testimony, did not like this act. Her letters, on the other hand, prove that she was more attracted to women - an inclination she never wanted or was able to act on.

As a politician, Pompadour played a decisive role in the alliance with the former “arch-enemy” Austria, on whose side France fought in the Seven Years' War. The people, enraged, then blamed the lost war on the hated mistress, who had sometimes not made a happy choice in appointing suitable commanders.

In 1754, her beloved daughter Alexandrine died of appendicitis. Now the Marquise was left only with Alexandrine's brother Abel, for whom she found a suitable position in the royal administration as an art expert. In 1756 she was elevated to the rank of duchess and entered the service of the queen as a lady-in-waiting. At the same time, Jeanne was active as a successful investor and entrepreneur, since Louis XV's allowances were dwindling. As far as can be judged, she loved him sincerely throughout her life, was always loyal to him, and passionately defended even his wrong decisions from all his critics. A career like Pompadour's was only possible in the age of absolutism. She embodied what a woman who was not born to rule as a member of a dynasty could achieve at the highest. But even such a position had to be bought through dependence on a man who determined the rise and fall of the woman concerned. While in France the institution of the official mistress was socially accepted, in other countries the mistresses of the rulers were bashfully concealed, and they themselves were despised by many.

Pompadour's health, always fragile, collapsed under grief and strain. A few months before her death, she, by now an overweight matron, received little Mozart for a private concert. At the age of 42, she succumbed to a lung disease and was buried in the chapel of the Capuchin nuns in Paris, of which there is no trace today.