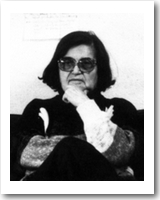 “The building site has always been my great love,” the architect Lucy Hillebrand confessed in her eighties. She grew up in Mainz in a family which was interested in the arts and open-minded. As a teenager, she took lessons in harmonic gymnastics, a precursor of expressive dance. The experience of space in dance was a decisive impulse for her desire to become an architect - as was her encounter with contemporary art, in particular the paintings of Alexej Jawlensky. It was her own approach to the world she found there: the reduction of all forms to their essence, the fixing of movement sequences by means of a spatial script and the realization in architecture.

Already during her studies, which she completed as a master student of Dominikus Böhm at the Kölner Werkschulen, the Bauhaus-inspired art academy in Cologne, her extraordinary talent became apparent. She won several competitions and received her first commissions.

In 1928, as the youngest Werkbund member, she had a professional encounter with Kurt Schwitters in Hanover, who recommended her to the Bauhaus graphic designer Robert Michels in Frankfurt. As one of the very first freelance women architects in Germany, she set up her first studio there and worked with the Das Neue Frankfurt association, among others. Marriage and motherhood did not prevent her from practicing her profession. She simply took her little daughter with her to the construction sites.

After the war and the destruction of her two studios in Frankfurt and Hanover, she started a new career in Göttingen. In the post-war period, she was one of the first female architects to receive commissions for public buildings. As a pioneer in the design of new spatial forms, e.g. for schools, she questioned spatial hierarchies that manifest power and developed emancipatory counter-designs.

She saw women architects as ” transformation stations” who design buildings appropriate for the needs of future users and the requirements of the surrounding landscape. Impressive in its reduction to simple structures, the Dünenkirche church on the island of Langeoog is a showcase example of her architecture. An authoritarian perspective and prestige thinking were far from her mind. She created impulse-giving spaces, which were designed to allow the development and the free decision of the individual, but also contact with others.

Her great willingness to be open to new approaches again and again, to never be satisfied with the pre-conceived, and to exchange ideas with people from all areas of society resulted in many interdisciplinary cooperations. Even in old age, she remained a creative-utopian artist and questioner who presented bold spatial concepts, such as her design for a Museum of World Religions as a contribution to the 1989 World Architecture Exhibition in Sofia. Hillebrand's basic attitude to her profession was one of serving. Placing her professional duties above her own person she correspondingly never built a house for herself.
(Text from 2006, translated 2022 by Gabriele Koch with the help of www.DeepL.com/Translator (free version))