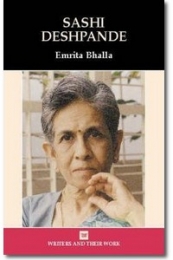 Shashi Deshpande is one of the eminent novelists of contemporary Indian literature in English. Western readers align her with Anita Desai. Indeed, both writers' work centres around women's lives in modern Indian society. However, only Deshpande lives and writes in India, and she explicitly addresses Indian readers, not the international marketplace.

Deshpande was born in 1936, in Dharwad. She is the younger daughter of the Sanskrit scholar, novelist, actor and dramatist R. V. Jagirdar (1904-1984) and his wife Sharda Arya. Under the name of Adya Rangacharya, and also under the pseudonym of Shriranga, he published a huge literary ouevre that includes translations of Sanskrit plays. He enjoyed great success and fame, his work has become part of the national Indian heritage.

Desphande grew up in a family that belonged to the upper middle class, and so does her own family. She was given the typical education at a British convent school, moved on to Bombay University and studied economics and political science, took a second degree, in law, in Bangalore, had her first job with a lawyer, then a law reporter. Finally –  she was by then married, with two sons, she added a degree in journalism (1969-1970), and topped that with a Master of Art.

In 1962 she marries Dhirendra H. Deshpande, a medical doctor. The couple settles in Bombay (later Mumbai), where her husband takes up work as a pathologist at G. S. Medical College. In 1968 they go to stay in London for a year. In 1970 they move on to Bangalore where they settle for good. Their son Raghu will live there too, until his early death in 2017. Their son Vikram lives in the US.

Writing did not come to Deshpande as a conscious decision. She had two children, no career, she ”got restless with being just a housewife and mother”. In England she felt isolated, with no friends, and her husband away all day. On their return to India her husband encouraged her to write about this experience. 1972 saw her first short story, “The Legacy”, many more were to follow.  Her father advised publication, otherwise the stories would get lost.

Thus began a career that would make her a name in India and beyond. Her father had taught her Sanskrit, she also speaks Marathi and Kannada, is well versed in the huge realm of Indian mythology, which she reads “against the grain”, from her own, feminist position. But she writes in English. Her English schooling, and her reading that has taken her through the better part of English literary history, will add to the subtexts of her own texts. The web of her main text, however, is woven from Indian women's lives, their day-to-day living deeply impregnated by religious, social, and political traditions, and gender relations determined by male power structures. Her – to date – eleven novels, children's books, two long stories, and many short stories rest on the complexities of tradition and modernity, a tradition that does not go unquestioned in Deshpande's work.

Deshpande creates figures that take her readers through the social strata of urban society, but her interest comes to centre more and more on women of the middle and upper middle classes; well-educated women who fight for their own space, for their place in the family and in their social and their cultural setting. This setting is the backdrop to her stories, action remains private, even with rape which is, after all, private only to a certain degree. With her first published novel, The Dark Holds no Terrors (1986), she introduces this painful topic that had already been there, as marital rape, in one of her early stories, “The Intrusion”, later follows it up in The Binding Vine (1992) and in Shadow Play (2013).

Deshpande's novel That Long Silence (1988) of which she says that it is her most autobiographical one, makes silencing, by the family and by society, its main topic. It is, as she has said, a loud shriek of despair. The main figure, however, manages to break the silence and to speak out, achieving agency. The novel had come out in English, in Britain, but was translated into Hindi, Marathi and Kannada. Which shows, not only the impact of the linguistic diversity of the subcontinent, but also the status Deshpande has by then achieved.

The themes and topics, the cultural contexts of her novels seem to reflect Deshande's own family and its cultural setting. There is literature, Indian myths, traditional Indian music, medicine, an intimate or at least a close relationship to her father, all of this being part of the fabric of  A Matter of Time (1999), Small Remedies (2000), Moving On (2004) and, most directly, of Strangers to Ourselves (2015). Deshpande's novels are family novels. Family, in their generational enfolding, in their ramifications, is the groundwork of the novels. Its intricacies, by the way, are more easily understood if readers – in particular Western readers - take to paper and pencil and draw a family tree. The complexities of this groundwork are not just family complexities, they are also the complexities of memory, and it is this that women shape as it has shaped them, that they experience and that they leave behind, through divorce or through separation.

Women, in Deshpande's texts, are not simply victims, of circumstance, of family, of society. Over the decades that Deshpande's work embraces, they have come to stand out as self-assured, self-empowered, articulate personalities. They leave behind limits and limitations, hurt themselves against and cross barriers and conventional norms. The female figure in In the Country of Deceit (2008) enters into a relationship with a married man. There are men who rape women, who are despots, but also remarkable men – lovers, husbands, fathers.

Why author Shashi Deshpande quit the Sahitya Akademi
No data is submitted to YouTube unless you playback this video. By clicking on the play-button you give your consent for YouTube to set cookies on the device you are using. Further information about cookie-usage by Youtube can be found here.

Deshpande is very much a political person, witness her many essays, articles, interviews, most of all her book Writing From the Margin (2003). Is she a feminist? Not as a follower of the Western Second Women's Movement, but from her own experiences that have formed her. Reading Western feminists has not shaped, but added to and confirmed her own convictions. For her political convictions she also goes public. Not only by attending public meetings, e.g. that on Gender and Censorship (Hyderabad, 2001). In 2015, after the murder of  a Kannada professor and writer, she stepped down from the Sahitya Akademi Council, protesting the Akademi's silence over growing intolerance in the country. He had been an honoured member of that Akademi, just as herself and, also, her own father.

Awards and accolades have not been missing in Shashi Deshpande's career. Neither have they spared her devastating reviews. In an interview she talks about such soul-destroying criticism and wonders how young writers could cope with it. At the same  time, translations of her work into regional languages show the high esteem that she has come to enjoy.  There is also this: In 1997, the first Indian female director, Prema Karanth, turned her novel The Dark Holds no Terrors into a film. In 2017, HarperCollins optioned the film rights for Strangers to Ourselves, to be directed by Hasal Mehta.

There was … the feeling that after becoming a wife and mother, my intellectual self, which had been so important a part of me until then, was being suppressed, that it was being discounted, not valued. And this dormant self was becoming restive, it wanted a release. Maybe it was out of the conflict between this 'female self' and the intellectual self that self-expression began.

… just as the language has found its space and its own constituency, English writing too is as much part of the literatures of our country as the other language literatures are.

It took me years to say even to myself, 'I am a feminist.' It  was the culmination of a voyage that began within myself and went on  to the ocean of women's place in the world.

I have no doubt at all that it is the women's movement which has made it possible for an increasing number of women to have more space to breathe. I know that as a writer I am privileged to be living at a time when the women's movement has made it possible for my voice to be heard, for the things I write about to be taken seriously, looked upon as issues that concern all of our society, and not just dismissed as 'women's stuff'.

In India, specially, myths have an extraordinary vitality, continuing to give people some truths about themselves and about the human condition. What women writers are doing today is not a rejection of the myths, but a meaningful and creative reinterpretation of them. We are looking for a fresh knowledge of ourselves in them, trying to discover what is relevant to our lives today. pp.99-100

Sadly, it has become increasingly important to reaffirm that difference of opinion cannot be ended with a bullet; that discussion and debate are the only way a civilised society resolves issues. It has also become clear that writers, who are supposed to be the conscience-keepers of society, are no longer considered intellectual leaders; their voices no longer matter. Perhaps this is the right time for writers to reclaim their voices.

Deshpande, Shashi. 2003.  Writing from the Margin and Other Essays. New Delhi. Penguin.

Deshpande, Shashi. 1978. The Lecacy and Other Stories. Calcutta. Writers Workshop.

Glage, Liselotte. 2009. “'What does your Jane Austen say?'  Shashi Deshpande's In the Country of Deceit.” Muse India 24.