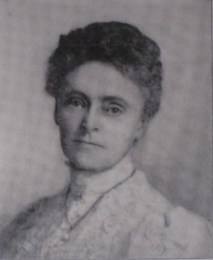 Annie Smith Peck was the youngest child in a well-to-do family from Providence, Rhode Island. Her three older brothers never wanted her to play with them, and Annie vowed that one day she would prove her worth to them.

To begin with, she was academically brilliant. In 1878 she completed her studies with distinction. In 1884 she went to Europe; she studied German and music for one year in Hanover and was the first female student at the American School of Classical Studies in Athens. Back in the USA, she taught at various colleges and gave lectures on archeology. From 1892 on, her primary occupation was that of a public speaker. 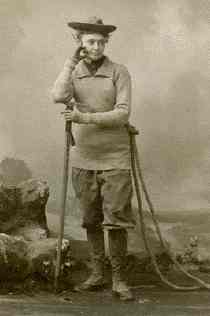 Annie Peck discovered her love for mountaineering in 1885 while traveling from Germany to Greece. After she had climbed a few mountains of medium height in Europe and Mount Shasta in California (4383 m), she scaled the Matterhorn in 1895. Overnight she became famous, if not to say notorious, particularly because of her unique climbing outfits: knickerbockers, tunics down to the hips, sturdy boots, wool socks, and a soft felt hat which she tied on with a veil.

Peck loved mountaineering – her delight at the ever new vistas was if anything intensified by the risks and obstacles she had to overcome. Her achievements in the athletic arena also helped her career as a public speaker. With her pleasant voice and her feminine appearance, she managed to captivate her audiences, which had expected a muscular, masculine-looking woman. Finally she set her sights on climbing something that had never been conquered and looked towards the mountains of South America. Although she was already over 50, Peck was seeking a peak higher than the Aconcagua in Argentina, which at 6960 meters had already been climbed. In 1908, after one failed attempt and accompanied by two experienced Swiss mountain guides, she finally reached the north peak of Huascarán in Peru, estimated to be 7600 meters high. Heavy storms prevented her from correctly measuring the height of the peak, which she figured to be 7300 meters. Thereupon Huascarán was established as the highest mountain in South America, and Annie Peck received international recognition for her achievement. But the mountaineer Fanny Bullock Workman, who had reached a height of 7100 meters climbing in the Himalayas, disputed her claim and had the height of Huascarán measured by means of triangulation: the height was calculated to be 6648 meters.

In 1927 the north peak of Huascarán was re-named Cumbre Aña Peck in honor of its first climber. Annie Smith Peck climbed her last mountain, the 1638-meter- high Mount Madison in New Hampshire, at age 82! (Transl. Ute Methner and Joey Horsley)

Her desire for success was stronger than her fear of danger, lost luggage, altitude sickness and other problems associated with mountaineering, and she had little empathy for those who did not share her ambition. Her nature had something steel-like to it, which triggered reluctant admiration rather than liking in most people. (Berta N. Briggs)