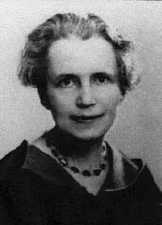 Her life’s journey made her a victim of triple discrimination:

Hedwig Guggenheimer was born in 1884 in Munich, the daughter of a banker. She was baptized in the Protestant church and never maintained any emotional ties to Judaism – until external forces weaponized her Jewish heritage against her.

At the start of the 20th century, the first German universities opened their doors to women. Hedwig Guggenheimer took advantage of this development and began studying history in Berlin. There she met  Otto Hintze, a professor of economic and administrative history and one of the most respected historians of his era. They married in 1912 after a two-year courtship, despite a 23-year age difference.

Hedwig Hintze garnered the disapproval of the circle around Otto Hintze as soon as it became apparent that she intended to continue her scholarly work and was not in the least interested in serving as an anonymous research assistant to her husband. Otto Hintze expressed his own disappointment privately, but he never openly criticized her.

Otto Hintze’s relatives and friends never forgave Hedwig Hintze for this “unfeminine attitude,” not even after her death. She earned her doctorate in 1923 and her habilitation (post-doctoral project required to lecture at a university) in 1928, but was only able to do so as the wife of the esteemed Professor Hintze. Yet her scholarly work was of the highest caliber, as even her academic opponents had to admit.

In Hintze’s case, not even the disheartening adage that a woman has to work at least twice as hard as a man to achieve an equal standing was true. Ultimately, it was only her family connections that enabled her to become one of the first women to earn habilitation at a German university. For a brief period she taught at the University of Berlin (since 1949 called the Humboldt University).

After the Nazis came to power, Hedwig Hintze was in immediate danger as a Jew. Up to 1939, she had commuted frequently between France and Germany as part of her work, constantly worried about her husband, who by then was very ill. In 1939, she was able to escape to the Netherlands in the nick of time. There she lived, utterly destitute following Otto Hintze’s death in April 1940, finding work initially as a housekeeper. In 1941 Hintze received an invitation to become an Associate Professor of History at the New School for Social Research in New York. But the Nazi occupation of the Netherlands in 1940 made it impossible for her to leave the country.

She died on July 19, 1942, possibly by her own hand – the circumstances are unclear. It was a miracle that she had endured as long as she did – and a testament to the strength of her intellect and her perseverance.
(Text from 1991; transl. 2021 Julie Niederhauser)