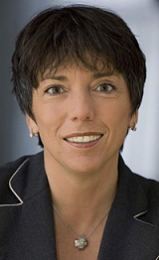 When with Bärbel Wartenberg-Potter a third woman was named an Evangelische (Protestant) bishop in 2001, after Maria Jepsen in Hamburg and her „leftist sister-bishop“ Margot Käßmann, the press scented „a feminist takeover in Germany’s northernmost Landeskirche (Regional Church).“ Margot Käßmann doesn’t let such clichés bother her: „...the buzzwords ‚leftist’ and ‚feminism’ are apparently applied to every woman in the office of bishop in an attempt to frighten people.“ Margot Käßmann has led the Protestant-Lutheran Church in Hannover since 1999 and has gained a following far beyond church circles with her appealing, natural manner.

Käßmann is deeply committed to the main emphases of her work – women, ecumenism, the spiritual leadership and future of the church – and she has been active in numerous important bodies, such as the Ecumenical Council, the Council of the German Protestant Church (Evangelische Kirche in Deutschland, EKD), as well as the Central Office for the Rights and Defense of Conscientious Objectors (Zentralstelle für Recht und Schutz der Kriegsdienstverweigerer, KDV), of which she is currently president. In television appearances with male colleages she competently holds her own with amiable self-confidence. In numerous publications, sermons and lectures she provides cogent answers to present-day questions, e.g., peace and the overcoming of violence, ecology, women in positions of leadership, marriage, divorce, puberty and child-rearing. The urgency of such issues is shown by the large number of letters she receives from persons seeking advice. In her wise, empathic and quite modern answers Käßmann also reveals much about herself (for example, she prays especially well while jogging).

Margot Käßmann was born in Marburg (Lahn) and studied theology in Tübingen, Edinburgh, Göttingen and Marburg. In 1985 she was ordained as a pastor and received her doctorate in 1989 with a dissertation on “Armut und Reichtum als Anfrage an die Einheit der Kirche” (Poverty and Wealth as a Challenge to the Unity of the Church). In 1981 she married fellow clergyman Eckhard Käßmann, with whom she shared responsibility for a parish from 1985-1990. The two have four daughters (Sarah 1982, Hanna and Lea 1986 and Esther 1991).

Margot Käßmann can serve as a model for other women who are committed to the preservation and renewal of the Church. They ought to take seriously her admonition that while they need not be any better than men, they should utilize more of their own skills as women. It is reasonable to hope that women like Käßmann can help restore the appeal of the Church and thereby, as she has said, provide direction to „people’s diffuse longing for religion.“

Postscript: In May 2007 Margot Käßmann filed for divorce, „an infinitely difficult step,“ as she says. It will be the first time that a sitting bishop has divorced. The Church Senate has stated that it „is in solidarity with her in her difficult situation and intends to give her full support in her proven execution of her office.“

On 24 February 2010, following an incident of driving while under the influence of alcohol, Margot Käßmann resigned the position she had held for barely four months as first woman leader of the German Protestant (Lutheran) Church; she also stepped down as Bishop of Hanover. She announced she would remain a pastor there.

Käßmann, Margot (1998): Overcoming violence. The challenge to the churches in all places. Geneva: WCC Publ. (Risk book series, no. 82).