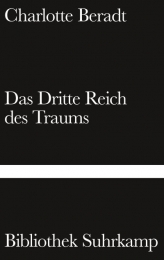 Charlotte Aron, who came from a wealthy family, grew up in Berlin, where in 1924 she married the writer and journalist Heinz Pol, through whom she found access to the Weltbühne, for which she worked until 1933. She wrote social reports and was committed to women's issues. After that, as a Jew and committed socialist she was unemployed. In 1938, five years after divorcing Pol, she married Martin Beradt, a writer and lawyer 20 years her senior, with whom she emigrated at the last minute to the United States via London in 1939. The couple, who had lived in affluence in Berlin, now sold valuables to pay the rent on a dark Manhattan ground-floor apartment.

To keep herself and her husband afloat, Charlotte Beradt eventually opened a “salon” in her apartment in 1940, which she ran for a good 20 years, coloring the hair of other exiles' wives. Elisabeth Bergner and Bella Chagall were among her clients. She translated texts by Hannah Arendt, with whom she was friends (later she became the executrix of Arendt's estate), and she re-established contact with German colleagues at the New York PEN Congress in 1966. She wrote radio reports in which she dealt primarily with Germany's political past. She edited a collection of letters by Rosa Luxemburg and a volume of essays on the communist Paul Levi, with whom she was acquainted. It was not until 1966 that she published Das Dritte Reich des Traums (The Third Reich of Dreams): between 1933 and 1939, while still in Berlin, Beradt had recorded dreams that were dreamt during the period of National Socialism. Her nightmarish book made it clear how National Socialist propaganda and terror can penetrate the recesses of private everyday life.

Charlotte Beradt never dwelled on her fate as an émigrée; she did not like to talk about it. Whether she would like to write her autobiography someday, Gabriele Kreis asked her in New York in 1980. “No, never.” She had been brought up, she said, not to take herself too seriously. “How it really was, you will never know.”
(Text from 1995, translated with www.DeepL.com/Translator (free version), edited by Luise F. Pusch)